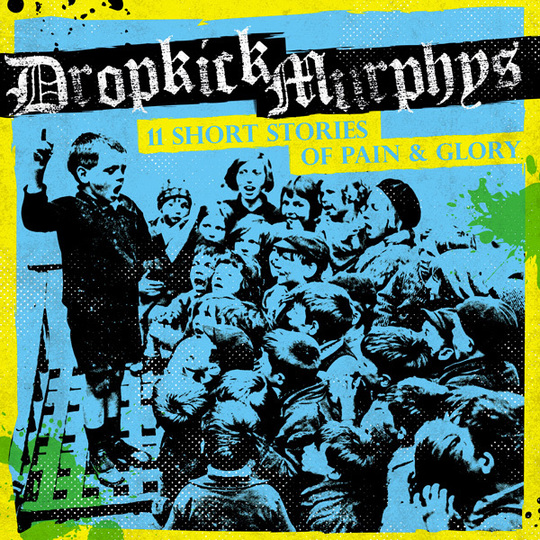 As heartily evocative of their Bostonian/Celtic roots as they’ve ever been, Dropkick Murphys are back with another helping of no-nonsense Irish street punk on latest album 11 Short Stories of Pain & Glory which makes for a pleasingly valuable addition to their ever-increasing discography.

This release marks the band’s ninth studio album and arrives almost two decades after their debut Do Or Die was released in 1998 with original vocalist Mike McColgan. It would be fair to say that the Dropkicks aren’t exactly reinventing the wheel, but frankly, if they keep knocking out smart, capable records like this every couple of years then why on earth would we ever want them to stop doing what they do so well?

‘The Lonesome Boatman’ is as rousing an opener as any we’ve heard from the band before, a fist in the air statement of intent that seems destined to be used by their rabid fans to beckon them to the stage over the coming years. We can see it now: beer swilling over the edges of the plastic cups, studded leather jackets standing to attention, mohawks bristling in anticipation. Goosebumps, boys and girls – that’s what we’re talking about here.

It’s a beautiful thing to be able to say that Dropkick Murphys are still all that’s right about the world of punk rock, and Liverpool FC fans might find a tasty surprise in the ‘You’ll Never Walk Alone’ cover that’s nestled in amongst the tracklist – a solid turn at an oft-covered but never bettered original.

From the swaggering bagpipe-ridden sway of ‘Blood’ that echoes AC/DC at their most sozzled, to the piano-stomping, proud assertion of a life turned around on ‘Paying My Way’, it’s very clear that Dropkick Murphys are a band still a long way from past their best. In fact, they’re as vital as ever and showing no signs of slowing.

An early highlight is the tender childhood reflection of ‘Sandlot’ which shows a band unafraid of their encroaching maturity and is an extremely adept take on Springsteen’s blue-collar folk rock, packed with simple poetic lyricism like the deliciously bittersweet opening lines: “When we were young we had it all. We had the sun, the moon, the stars. We didn’t venture very far, we didn’t go when people drove in fancy cars. We swam in pools but they weren’t ours. We weren’t rich but no-one told us. We didn’t know.” Digging beneath the surface ‘4 15 13’ is possibly the record’s most mature offering, paying homage to the victims of the Boston Marathon Bombing. As front man Al Barr gently croons “we’re all just people trying to make it through the day” there’s a sense of foreboding that saturates this deeply personal track, serving as a non-confrontational, head-in-hands reflective moment that ends poignantly on the stark closing line: “we lost our innocence today.”

They might not have a hit to rival the absolutely gargantuan ‘I’m Shipping Out To Boston’, which went some way to making them a household name as part of the soundtrack to the hit Scorcese crime-drama The Departed, but it seems like the Dropkicks clan have found something worth its own weight in gold: artistic integrity. Their output remains honest, unsullied and socially conscious – it’s still got all the bark and bared teeth of a Boston terrier, and the drinking songs are still out in force, but there’s a message of hope at its core that espouses all the values that are held so dear to the contemporary punk scene.

So, nine records in and we’re somehow not sick of them yet. Sláinte, gents – long may ye reign as the Kings of Celtic Punk.