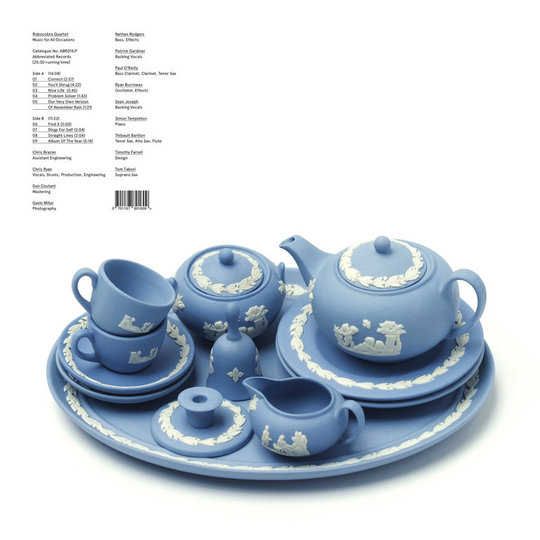 A hardcore punk band, prone to bouts of improv, fronted by a yowling drummer, that cites classical music as an influence, and utilises sax in entirely unfriendly manners. There's not a bit of 14-member, variable-piece Robocobra Quartet that isn't absolutely, willingly fucking contrary.

It all works, mind, settling at a sedate, Belfast-accented jazzy noise that's not without its charm, emerging as it does from the insanely fertile ground of Northern Ireland's independent music community. Beginning as graduates of Belfast's Sonic Arts Research Centre, the band debuted in 2014, with a constantly shifting live line-up from among its members, hitting Brilliant Corners and Electric Picnic festivals in the process, as well as releasing a limited 7-inch via Northern stable Smalltown America.

There's not much fucking around to be had across the nine tracks on the band's debut LP, Music for All Occasions, as best exemplified by the looping and concentrated bassline in 'Nice Life', the centre of a groove around which everything else rotates. Album opener and leadoff 'Correct' starts as the band means to go on, an oddly-timed bit of post-hardcore that owes as much to Shellac's dour disposition as to their jazz predecessors, heading briefly into Stoogesy sax wigout territory.

Spoken-word has also pockmarked the discussion of the band's sonics, and emerges here less as a vocal tool, and more as a part of the overall concept – 'Problem Solver' acting as a let-up, a pause for thought amid all the brow-furrowing before heading into sparsely-realised Our Very Own Version of November Rain. 'Find X', though, is where the band hits their stride boldly, like Fugazi-meets-Mingus in an near-empty venue, rain cascading down the windows outside, with all of the lofty expectations such a comparison connotes.

Throughout the album is the constant feeling of a band approaching every aspect of itself with precisely fuck-all nonsense or pretension about what it's doing, and yet everything is purposeful and concentrated, as best seen in stark, snarkily-titled album-closer 'Album of the Year'. Neither is that to say there aren't moments of bombast: 'Dirge for Self' is a disgustingly assured, cocky, striding affair, while 'Straight Lines' diverges in vaguely psychey, reverby territory in brief glimpses.  There's possibly not much more to be said on the record on its own – it seems to your writer to be as much an emphatic statement of intent going forward as a standalone artistic endeavour in its own right. Sparing without being subdued, distrustful without veering into paranoia, dour without losing focus or fire. It bodes well for the collective.