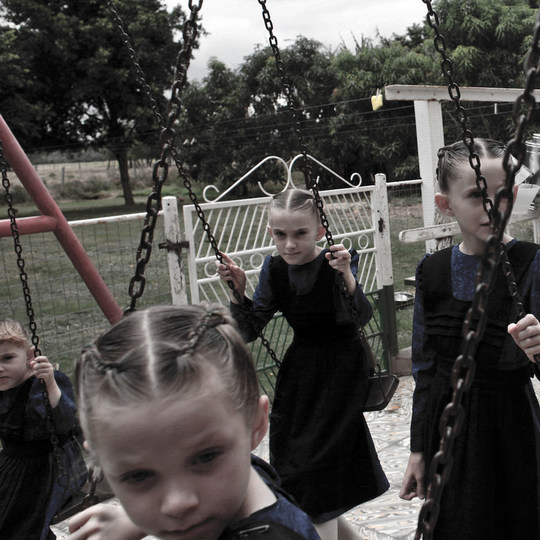 Heard a story once about Crystal Castles. Supposedly the duo of Ethan Kath and Alice Glass rocked up for a headline show in a rather intimate and unassuming Irish venue and found themselves utterly bemused when the equally befuddled management wouldn’t accommodate a request to drill holes, mount lights and generally get their avant-garde DIY on.

It stands to reason that Kath and Glass wouldn’t comprehend this stumbling block. Poking, prodding and unsettling in stoic vanguard fashion was their signature, after all. Years later, their instruments of disruption would turn inward as Alice Glass, her distinctive voice both caustic and soothing, spirited away. The official exit statement, issued in late 2014, spoke to untenable disharmony:'My art and my self-expression in any form has always been an attempt towards sincerity, honesty, and empathy for others. For a multitude of reasons both professional and personal I no longer feel that this is possible within Crystal Castles.'

Later, Glass doubled down on these ills, noting that her time in the band was 'deeply miserable', that she was 'living a lie' and how she, not Kath, was primarily responsible for the direction and output of their union. Kath, donning something of a passive-aggressive velvet glove, would matter-of-factly dismiss such claims while offering read-into-it-how-you-will support for Glass’ next move.

Amnesty (I) is an odd affair; the sound of a band reborn out of pure necessity yet one where all component parts ring meticulously familiar. New vocalist Edith Frances is especially game but this is as like-for-like as a replacement can get and you can’t help but regard her presence as an exceptionally cynical Corgan-esque manoeuvre on Kath’s part. No matter how effective Frances’ turn is here – and it often is – she ultimately registers as a device, one that Kath retains full control of. What’s more, Amnesty (I) is wall to wall the kind of thing Crystal Castles would have played onstage a decade ago when they weren’t trying to transform the place into a wall-bothering temporary art installation.

But here’s the rub – it’s good. Crystal Castles, with or without Glass in tow, are highly unlikely to serve up a curveball at this stage of the game – Kath is clearly much too invested in and enamoured by his chosen aesthetic – and so it’s fine when just about every single second takes you back to various hipster bars and student club nights in 2008. It’s equally acceptable and indeed satisfying when the likes of ‘Char’, ‘Concrete’ and the frenzied, Beach House-sampling ‘Kept’* act as close relations of ‘Magic Spells’, ‘Courtship Dating’ and ‘Vanished’.

Playing it safe and sticking to an established, successful script makes sense. Faced with potential division, Kath has to treat those staying loyal as sweet as possible and so Amnesty (I) unashamedly swings hard for the ‘same but different’ fences. ‘Femen’ and ‘Their Kindness Is Charade’ make for clean bookends; the former a hazy cinematic toe-dip into the welcome waters to come, the latter a sweeping ‘come down with me’ lure that’s as derivative as it is enticing. In between, no alarms and no real surprises, yet the execution carries Crystal Castles 2.0 through.

*Er, this particular track vanished from the always-fun-to-use album streaming service as this review was being written and has yet to resurface, so if ‘Kept’ doesn’t appear on release day, that’s a rather bizarre shame as it was by far and away the best song on here. ¯\_(ツ)_/¯