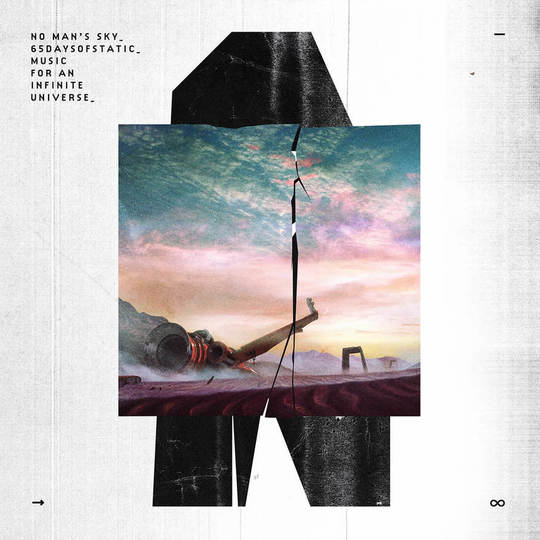 Sound does not carry in a vacuum. In space, quite literally, no-one can hear you scream. It is perhaps ironic then just how central sound is to the sci-fi experience in films and, increasingly, in video games. Space is the ultimate blank canvas for the human race’s hopes and fears: whether your experience of space is creeping dread aboard the USS Nostromo or triumphant exhilaration in the Millennium Falcon, a lot of that comes down to the score.

65daysofstatic are no strangers to scoring science fiction, having previously provided a re-score to the inexplicably-beloved-by-Mark-Kermode Seventies sci-fi 'classic' Silent Runnings. With this soundtrack to computer game No Man’s Sky though the stakes are considerably higher. This might not be apparent to non-gamers, so here’s just a tiny snippet of background: No Man’s Sky is a video game with enormous expectations heaped upon it. It promises the player the chance to explore 18 quintillion different possible planets; a game of a scope never before seen or even attempted. At the time of writing it is yet to be released and it is impossible to say whether it will be a game-changing work of genius or an overambitious flop. This soundtrack can’t tell us whether the game is any good or not, but it certainly gives a lot of clues as to what kind of a gaming experience we can expect and a sense of the flavour and atmosphere that Hello Games are trying to create.

There is no getting away from it: 65daysofstatic are a post-rock band and No Man’s Sky is a post-rock record. As a genre, post-rock has fallen heavily from its former glories: 2016 has already seen two long running titans of the scene, Mogwai and Explosions in the Sky, release 'Hey! Remember that thing we do? We’re still doing it!' LPs that have done nothing at all to dispel the idea that the genre is stuck in a canyon-sized rut. No Man’s Sky certainly has its fair share of genre signifiers (chiming guitar passages? Check. Instrumental crescendos? Check). There’s enough on the surface to make the nay-sayers roll their eyes and mutter 'it’s this record again'. However, being given the entirety of a galaxy for their canvas has led to a leap forward in terms of the scope and ambition of No Man’s Sky that propels it far beyond they orbit of post-rock mundanity.

Not every great video game score works as a standalone listening experience (yes I am looking at you Bioshock Infinite) but it would be perfectly possible to listen to No Man’s Sky without knowing anything of the game and simply hear it as a perfectly coherent and enjoyable album by one of the most interesting and ambitious of the post-rock bands currently active. References to science fiction classics are all over the track listing (‘Asimov’, ‘Monolith’) but the genre’s influence is felt more deeply than in just the names: from the triumphantly upbeat thrum of ‘Monolith’ – music for boldy going into a sleek Technicolor future if ever I heard any – to the wordless vocals conveying a sense of awe and scale in ‘Supermoon’. This is a record that takes the idea of excitement and forward momentum from space travel and then blasts them at the listener with no let-up.

Although post-rock is normally associated most with guitars, the two instruments that lead to the success of No Man’s Sky are drums and piano. Throughout, the drums drive the music forward with a sense of real pace and urgency. One of the concerns raised about the game is that it will be little more than aimless noodling about in space, but the kinetic and exciting percussion throughout the soundtrack makes that seem unlikely. The piano is used on many tracks to suggest a human element, a warmth, that sits alongside the gleaming technology and propulsion characterised by the other instrumentation. This is particularly noticeable on tracks like ‘Escape Velocity’ where a high pitched feedback whine gives the impression of an engine screaming forwards for take-off and is set alongside a simple piano line that brings in the sense of the person experiencing the space flight and not just the flight itself.

Some versions of this release include No Man’s Sky: Soundscapes – extra material used in the game that didn’t make it onto the album proper. These in general are a little more subdued and less euphoric than the main album but in no way disposable. The tracks work by providing subtle mood cues to the listener rather than demanding the attention front and centre. The other significant difference is the wider palette of synthesiser sounds that are deployed, often to evoke classic science fiction memories. Soundscapes is a less immediate record but no less powerful.

The sound of space matters. Try watching 2001: A Space Odyssey with the volume off if you ever want to appreciate how much. It will be fascinating to see if the game No Man’s Sky manages to live up to its promises about conveying the scope and excitement of space exploration but if it fails it won’t be because of the soundtrack. 65daysofstatic have captured the sound of space as one of excitement and exhilaration: whether you experience it in isolation or as part of the game it is certainly one worth listening to.