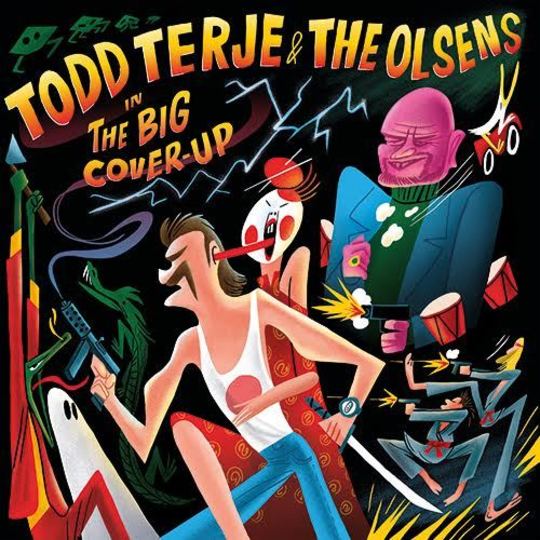 Be warned: Todd Terje and The Olsens are releasing an EP of disco covers and it will make you stomp, clap, hop and shuffle and you won’t be able to sit down even if you try.

Covering much loved classics from disco giants such as Boney M., Martin Denny and, er, Vangelis, the Norwegian conglomerate has cooked up some heart­warmingly familiar, feel­good tunes with drops that will make you regret you had that last G&T, cause, uh­oh, you’re hitting the dance floor and you know it’s going to get messy…

The Big Cover­-Up marks Terje’s first release with The Olsens, and it's yielded wildly exhilarating results, evoking a pervasive sense of optimism and happiness. From the funky Eighties-sounding beats and synths of ‘Disco Circus’, through the sexy, jungle beat­inspired ‘La Fete Sauvage’, to the playful and happy­-go­- lucky ‘Baby Do You Wanna Bump’ – which seamlessly marries the deep male lead vocal of the Boney M. song with the pumping techno beats of Terje – the record is sure to add spring to your step.

It would be unfair to say that The Big Cover-Up doesn’t hit a slump every once in a while: the build­s to the big release can get a bit self-­indulgent and monotonous here and there, occasionally obfuscating the human pulse beat behind the relentless machine beat. Some of the tracks are just begging to be seasoned a bit more generously with some warm and funky horn or string arrangements or slightly more dynamic rhythm progressions.

Nevertheless, the occasional lull doesn’t stop The Big Cover­Up from being an utterly enjoyable, crisp., power­packed beast. So if you’re getting in the mood for busting some sick moves on the dancefloor this summer­ Mr Terje is your man.