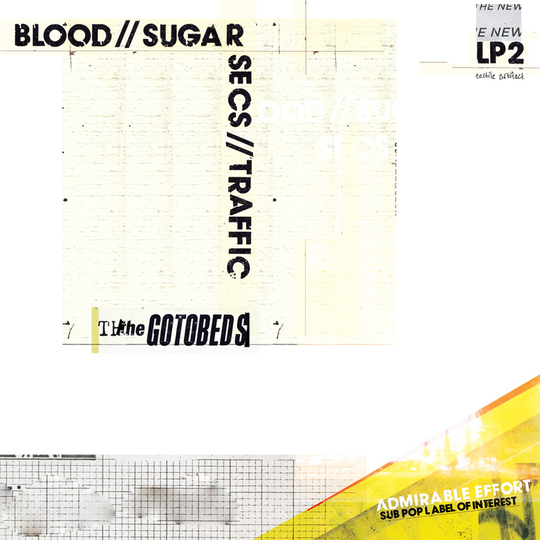 Hey, you. Yeah, I’m talking to you up there, assuming that I’m down here. You’re looking for new music, aren’t ya? Something vital, something to cut through lukewarm chatter like a hot knife through pork fat. Post-punk? Don’t give me that ground beef! There’s folk out there that leeched it dry, drained its colour, re-branded it something awful, and yet were, hmm, too preoccupied to undo the damage until much too late. Death, pain, mystery, blah blah blah.

You know what you need? Beer. Jump cuts. Running gags. Live wires and sparks. Enter The Gotobeds. Four blokes they may be, but they’re four blokes who cracked Wire’s codes, stripped out the art school pretence, and recreated college rock in their own subgenius image. And what’s more, they really don’t give a fuck about ego or 'breaking' the music biz, as this here Blood // Sugar // Secs // Traffic album demonstrates.

If you’re new to The Gotobeds, there’s not much to catch up on. They’re the same ol’ feisty amalgam of American and British underground records as before – prickly and fast dual guitar wig outs like in Mission of Burma; melodies and basslines so amiable and catchy that you swear you’ve met them somewhere, like in Pavement or Fly Ashtray; premiums on the short and sweet, like their muses Wire. To be honest, the boys have barely changed at all – maybe not so many frayed nerves, but otherwise the Gotobeds are as incendiary (and/or combustible) as ever.

So how are the songs? Some are good, others are GREAT, and nothing sucks. Opener 'Real Maths/Ask Too Much' does just what an opener should, i.e. shoulder-barge you off the barstool and goad you to scamper after them (the “OK!” that follows every “ask too much, ask too much” never gets old). 'Why’d You?' is an unbridled beast, sheer cannon power pop squeezed into two minutes. But the buried treasure is 'Red Alphabet', the least Gotobed-ish thing they’ve ever done – alphabets that bleed? Tender melody and meteoric ascent? Why do I want to cry? – and arguably the most nail-on-the-head synthesis of all the light that 154 could offer.

Elsewhere, the Pittsburg pranksters continue to snigger at the sheep-like habits of bands desperate for fame. Last time they penned the genius line ”New York’s alright / if you can get your dick sucked” - which, from what I’ve heard, is an accurate synopsis of the institutional favouritism that goes on in the Big Apple (not to mention the music biz at large). This time they snipe Los Angeles on the mega slack anthem 'Cold Gold (LA’s Alright)', with the equally genius observation that “[in America] we don’t move on, we just move / you ever seen LA? Ha ha / they’re not living proof”. But 'Crisis Time' could be their most savage dig yet – spurred on by a militant Gang of Four-ish chop, they tear into “commercial bands who make songs for commercial use”, idiots who “got their politics from a store” (Urban Outfitters, I’ll bet) and yet dare to insult watchdog writers like Jes Skolek. If anyone slightly more pretentious tried to pull this off, it’d sound sour – but the Gotobeds tackle “Crisis Time” with the same fervent flippancy that informs everything else they do, and the rant comes off as a natural extension to their anti-industry stance.

The Gotobeds’ cheek manifests outside the lyrics, too. 'Manifest', a manic Fall-esque tune barely 90 seconds long, dissolves into a prism of twinkling synth loops. The dumbfounding closer 'Amazing Supermarkets' careens into a flurry of guitar noise, then brakes short with babbling radio voices and a single note on a harmonica. A professed non-musician, Eli Kasan often slips from his righteous, suave delivery into a delirious falsetto (much like one of his other heroes, Mark E. Smith). You can’t quite call the Gotobeds 'experimental' – they’ve just got an ear for the chaotic quirks that glossier bands avoid to maintain their hip (and marketable) image.

So, yes – say hello to The Gotobeds. Unlike certain others who mount themselves on pedestals and pose for the charts, these guys will grin and wave back. Unless you’re a dick, of course.