The Dream is Over 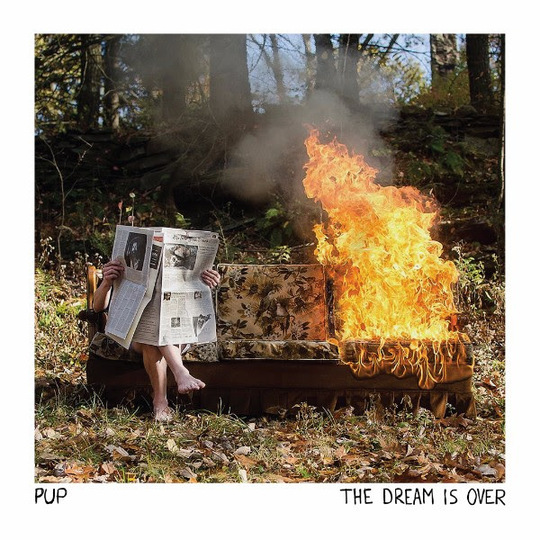 The words spoken to PUP vocalist/guitarist Stefan Babcock by a throat specialist give The Dream is Over its title. Following two years of hard touring and harder living, the frantic, flailing, self-destructive but immensely enjoyable shows in support of their debut record had taken their toll.

How Babcock came back from that point, now finding himself the leader of a band who have not mellowed but certainly developed more strings to their punk rock bow, seems irrelevant - here they are, raging, whirling and screaming once more.

Dogged by cringingly honest self doubt, Babcock, along with born-to-lose poets like Patrick Stickles and Craig Finn, seems destined for a dumpster of his own making but is determined to give people as good a time as possible on the way there.

PUP are at their very best when Babcock turns his microscope of self-awareness into a kaleidoscope of brotherhood for the listener - "I feel like I can’t win / I’m growing up and giving in" he wails, chorused by the voices of the band on ‘Can’t Win’, an impossibly rousing, raging tune that, on listening, creates the opposite meaning for its downbeat lyrics, the message of the song becoming the opposite of its observations as the listener is thrilled, energised and compelled to scream along - complaint-rock oscillating into a celebration of shared achievement.

The same works on 'DVP' - a rolling ruckus in which Babcock calls himself out on his boozing ("Three beers and I’m so messed up") before allowing a friend or partner to comment with the clear, concise and evidently true "She says I drink too much…She says I need to grow up". It’s a miserable, celebratory clutch at the brass ring of a balanced existence that we can all nod to and understand on some level.

Things sour when the loathing is aligned outward - ‘Old Wounds’ for instance is that tired, haggard punk creature, the ex-girlfriend-bating hate parade. "It’s so embarrassing - don’t you know I’m over you" Babcock whines before pulling it back - just a little - with "You want to know if I’m still a prick? Well, I am". Songs like this, as excellently executed by the band as they are, are below their par and something punk rock doesn’t need anymore. Same goes for ‘My Life Is Over And I Couldn’t Be Happier’ which, awesome title and furious instrumentation aside, is another bitter pill - "If I came home right now, what would I find out?". It’s just too crying white boy, too accusatory to really enjoy.

There are more empowering anthems here though, such as ‘Sleep In The Heat’, all surging, reeling guitar lines, “Woah-Woahs”, a handclap breakdown/rebuild and the tragic closing line "You hadn’t been eating, I thought you were sleeping / But you’re not waking up".

The biggest, most blatant and blaring tune here though is ‘Familiar Patterns’ which may read as an indictment of the music industry, but equally could be a condemnation of false friendships. It’s a barrage of blurred sound dotted with viper-like lines - "I fell for the bullshit then I started falling apart" then the overwhelming gang-chant explosion of "They used to say don’t quit your day job / Well guess what?…I never had one’" It typifies the band at their best - acknowledging their own failings, the disappointment of the world around them, shrugging ‘what-can-you-do?’, chugging another beer and diving back into the pit.

In another key entirely we have the odd pairing of album centrepiece ‘The Coast’ and closer ‘Pine Point’. These are poetic, lyrical sojourns into Babcock’s psychogeographic recollections of, in the first instance a lake that "needs to eat just like all living things / and it’s hungriest in the spring" then kisses us off over a Glassjaw power-drive with "No-one can accept the fact the lake gives us life and it takes us back’" Shifting from the gothic to the melancholic on the reflective closer we get a broader picture of American problems through a very personal aspect. "The mine was closed in ’88 and everyone disappeared" he recalls, then noting "Nothing but memories, the abandoned cemetery" and offering the line of the record with "The room you were born in - it was just how you left it". It’s a moment that quietly observes and then moves the listener, an echoing scream away from accusation or self-loathing. It’s beautiful. Though the song may be something of a slow chug n’ fist-pump, somewhat crass in contrast with their usually frantic nature, the singalong close is rousing, beautiful and, strangely, feels totally out of genre.

PUP’s second record is one of moments and contrast - huge musical and lyrical leaps forward, some magical trickery and sleight of hand, a few stumbling mis-steps and finally a huge bright, beaming light offering this budding band a path to follow down which they can flower, grow and hey, maybe one day, not be quite so fucking hard on themselves.