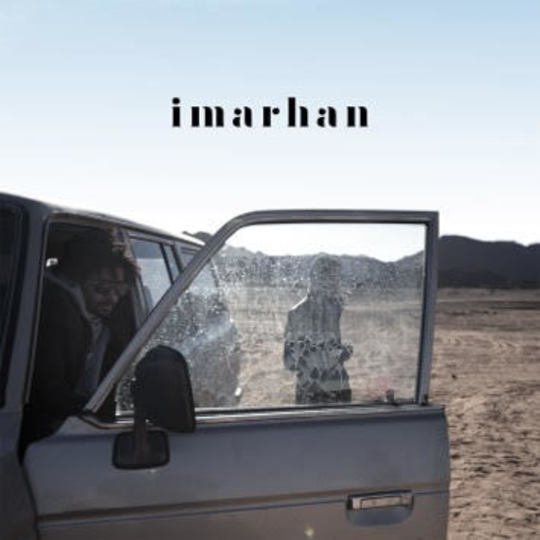 The Western world has long romanticised indigenous culture and traditional attire is a big part of that. It represents a society as bounded, unchanging, traditional, and 'authentic'. Environmental campaigners have always used these images as a political tool – a socially constructed representation that cannot be held to constitute the complete reality. The West's view on these cultures is filtered through an imperialist nostalgia that helps people think that perhaps the arm of modernity isn't quite so long.

In this regard, Tuareg legends Tinariwen - who are Imarhan's musical elders - look great on a Glastonbury stage in their robes with a Greenpeace sign beneath their feet. In contrast, Imarhan are a band who prefer leather jackets and jeans. Visually they're much more a representation of what the Tuareg city of Tamanrasset - which is their southern Algerian hometown - is actually like now. It's a bustling city with internet, a tight-knit music scene and the rest of it. They're not obscuring how penetrative modernity is, they're embodying how traditional music and culture has changed as a consequence of it.

To be fair, though, Tinariwen always embrace a hybrid style, even if their image attains to something much more unchanging. They've been compared to John Lee Hooker as much as they have traditional Tuareg music in a style they call the Assouf, which translates to longing, loneliness, and nostalgia - hence the 'desert blues' translation.

It's the concept of Assouf, and the embrace of Western instruments and musical styles that puts these debutants are on the same page as Tinariwen. This similarity is no pastiche, though, it's a case of their roots intertwining with each other. It's as if Tinariwen recognise that Assouf music needs to continue from generation to generation to survive and that Imarhan are the chosen ones that can relate to the kids.

Frontman Moussa Ben Abderahmane – aka Sadam – is cousin to Eyadou Ag Leche - a very important member of Tinariwen. Leche gave Sadam his first guitar and gave Imarhan's bassist his first bass. Moreover, Leche invited Sadam to fill in for members of Tinariwen who were restricted from touring during the Northern Malian conflict. Whilst more recently, Leche produced this debut album, co-wrote some of the tracks, and invited them out on tour.

Leche's done a remarkable job on the production; it's up there with anything you'd expect from a respected indie label like City Slang. But it's easy to hear not much editing was probably needed. These guys have played together since 2007 day-in-day-out. Rich layers of harmony and hypnotic rhythms reflects that - it's not often you can get so mesmerised by a band as on this album.

The highest feeling to emerge from it is the title track, which means, 'the ones I care about'. The emotion of the song certainly embraces the idea of celebrating friendship - it's a jovial cut with massive classic rock guitar riffs that does cause a massive ruckus among audiences live, and it maintains this electric energy on the album. Also, 'Assossomagh' has an epic reverb sound on the guitar and the intro riff is as catchy as anything you'd expect from a great classic rock band.

The real asset to record comes in the diversity. The hi-tempo rock of the aforementioned cuts is contrast with achingly beautiful introspective moments that leave space for contemplation. A highlight of these moments is 'Addounia Azdjazzaqat' which combines tender acoustic finger picking combine with hazy vocal harmonies that would be perfect for driving down any lonely road - it really connects with the Assouf concept.

Even within songs of a similar mood, the production ensures that there's enough diversity. 'Ibas Ichikkou' is mostly slow and introspective like the above aforementioned cut. But with atmospheric textures nodding to the most wigged out moments of The Doors and Jim Morrison's solo stuff, it becomes a completely new listening experience. And even though this may reflect the shamanic and unchanging vision of a dusty desert road thanks to the transcendent magic of the musicians, lyrically, they're not escapists. Like the way they dress, the words - according to their press release - are very much connected with urban issues.

The eclectic range of spacious introspection and thoroughly danceable songs means the record showcases the band at their current best. Imarhan is the sound the band have spent their whole lives perfecting and it comes across like a best of. Given that they've probably got a lot more in the back catalogue that didn't make the cut for this album, there's definitely more to come from the Imarhan arsenal, but this is a great start.

Couple in a Hole – Original Soundtrack