The Peace & Truce of Future of the Left 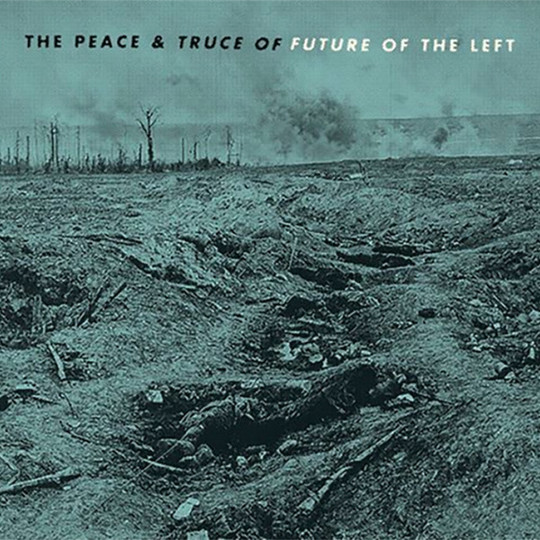 Let’s just throw this out now: Andrew Falkous has NOT, contrary to Ian Cohen’s prediction, become a willfully delirious lunkhead.

Now that I’m planted my flag in a camp, may I introduce you to the new world from Future of the Left. It’s been a while since the deviant How To Stop Your Brain In An Accident, but the landscape hasn’t warped that much since the Mclusky days – two-ton grooves gouge holes in yr skull, rhythm and meter shift like the choreography in a kung fu fight scene. Falco’s writing, however, has veered into its most abstract phase yet, where reincarnation and drunken posters are as commonplace as cheese and lager. It’s enough to beat your head in, rob your breath, and leave you staggering and slurring for a week (trust me – I’m there).

Now, upon entry into The Peace & Truce, the listener will find the lights dimmed, and the ground beneath them tangled in wires. With one less guitarist, bass lines lie exposed more often than before; the riffs that should sheath them are scorched, ripped, patched. Even without reading into the lyrics, songs like 'Running All Over the Wicket' stab with enough Melvins-ish menace to draw blood. And where other albums offered some reprieve from the violence (like 'City of Exploded Children' or 'French Lessons'), there’s no rest in sight here. Not until the abrupt stop of closer 'No Son Will Ease This Solitude' are we freed from FOTL’s talons – but that’s only after the tension that clenches ever tighter on lines like “my bank account is not a hole / it has no real purpose and a hole has one”.

That leads us to Falco, who more than ever yields such memorable lines that one can’t help but yell along. (You don’t know yet how GREAT it feels yet to shout “you army surplus motherfucker” while stuck in traffic.) There’s less of the dubious sexual situations, and more about themes like being consumed by consumerism, smug upper-class snobs, and all those mindless dweebs who live for holidays and infinite leisure. At least, I think. The details aren’t always clear. I still have no idea what 'If AT&T Drank Tea, What Would BP Do?' is about, but then no thread might exist between dying in your thirties, a gammon on the bed, and lockjaw. Logic breaks down sometimes on The Peace & Truce, which is what makes this world so disorienting.

Not always, though. 'In A Former Life', a heavy-handed track that ridicules the concept of reincarnation, ends on the lines “crop rotation is not on the schedule / crop rotation does not really work” – a wry suggestion that the whole concept of rebirth may be bunk. There’s also the brilliant 'Miner’s Gruel', in which Falkous imitates a prim mother telling her privileged daughter to move out, and shifts abruptly from bizarre twists on old clichés (“we both want the best for your future… / but if time is not linear then the facts are contestable”) to an outright unraveling of both parents’ authority.

One thing still bugs me, though: on the last two albums, the standout tracks for each year, well, stood out ('Robocop 4: Fuck Off Robocop' and 'The Singing of the Bonesaws', obvs). I’ve sung along to The Peace & Truce over a dozen times in the past week, but I still can’t place the real highlight. It’s not the bouncy 'Reference Point Zero', although I love the bit about “a real life university / which was never there anyway” and the strained, seething guitar. It’s not the chug-a-lug '50 Days Before The Hun', although the kazoo-like “na-na-na-na” parts smack of such cheese
that one can’t help but grin. It’s definitely not the straightforward “Grass Parade”, although its pansy sing-song nature sounds like a deliberate farce (“singing along on the sidelines… / where it doesn’t rain”).

Maybe this lack of a glaring magnum opus is a good sign. One thing’s for sure: Falco shall remain a hero to all of us who need absurdity to survive, to fight back against the mundane forces that grind us down and shut off pathways in our brains. I stand firm by my flag.