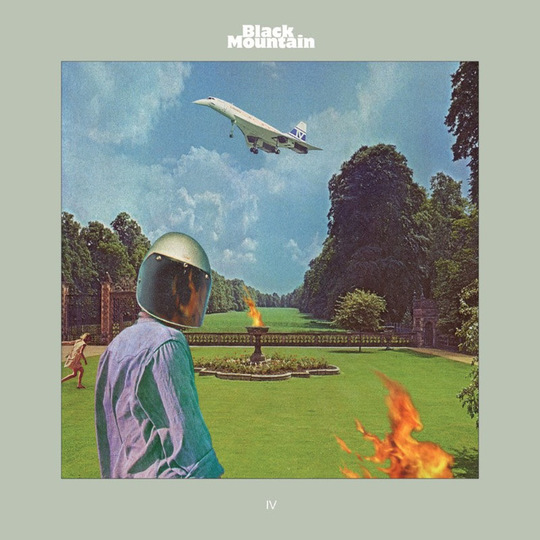 Four. Yeah, that’s quaint. Led Zeppelin didn’t label their fourth album with a proper title, either, cos by that time they figured they were so godlike that their albums would practically sell themselves. Time proved them right – that’s the one with 'Stairway to Heaven', after all – but a classic rock revivalist band like Black Mountain can’t possibly expect the same reception. True, the Canadian five-piece has been around for about a decade now; and yeah, they’ve also penned a soundtrack; and indeed, their last (and very Zeppelin-esque) album even landed on the long list for the Polaris Music Prize. But in the world-wide metropolis of today’s music sphere, folks can’t conduct open robbery like Led Zep used to and expect their star to rise as high. For IV, Black Mountain have shifted from outright hard rock to the ponderous space of Pink Floyd, but they’ve ripped full pages from their albums and scratched out Roger Waters’ focused cynicism for…something, something confusion.

Now, to be fair, a classic rock revivalist band only needs to rock, and Black Mountain does accomplish that. At the onyx altar that is opening track 'Mothers of the Sun', hooded figures bow to Black Sabbath and Blue Öyster Cult with over-the-top organ action and slabs of guitar. There’s even this neato flute line to amp up the mysticism. It’s great. Class rock theatre. Then they go and outdo themselves with their single, 'Florian Saucer Attack', which oughta shake the world – it’s got those wonky new wave-y synths, Amber Webber singing like she’s hanging from a thread, and chug-a-chug histrionics that’d sound at home on the airwaves beside Golden Earring or Grand Funk Railroad. 'Constellations' is OK, with Stephen McBean slipping into a cool Thurston Moore accent over the solid Led Zep groove. Note, though, that this is the one time that Black Mountain groove at all on IV - which is sad, since their best work to date has been their grooviest (case in point – 'No Hits').

By 'Defector', things start to get fishy. Here the Pink Floyd obsession starts to kick in – the icy synths, the lazy beat, the flashy blues riffs. It’d be interesting, if Black Mountain had some new story to tell with it, and also if they’d stop saying the word “confusion”, which crops up in no fewer than four of the ten songs. What, do they think that repeating the word 'confusion' invokes the feelings of confusion? No, it doesn’t. The nearly nine-minute long '(Over and Over) The Chain', which is basically parts 1 & 2 of 'Shine On, You Crazy Diamond', seems to be about “silent confusion”. What does that even mean? Not to mention, it’s nearly nine minutes – there’s no glorious spotlight moment in here to justify all those dated special effects, not like there was with Waters’ magnum opus. 'Space to Bakersfield' doesn’t mention confusion, but it’s an even lazier Pink Floyd cop-out, yanking the whole damn aesthetic of Dark Side of the Moon and leaving out the conceptual threads that held Waters’ writings together.

More promise shines in the less muscular numbers. 'Line Them All Up', a simple acoustic ballad with breath-taking vistas, showcases Webber at her most sublime. The loveliest track on the album is followed by the weirdest, 'Graveyard Breeding': with the sort of alien-on-tiptoes glamor that marked Bowie’s later works, McBean describes the morbid influence of “fucking in the graveyard” – “when you looked in my eyes / I was dreaming of suicide”. Yeah, it reads like the plot for a gothic paperback, but that still engages the listener more than the sleepy Pink Floyd numbers or the electro-psychedelia of 'You Can Dream'. Not that the latter is bad – just that the harmless humming synths and hazy guitars swirl like perfume in a stale room, and linger longer than they ought.

Try as they might, Black Mountain haven’t made IV to withstand the withering winds of time. Indeed, they can rock. But, inevitably, their writing here lacks the epic imagery and themes that cemented the rock gods into the canon, and thus doesn’t bewitch in the same way. Black Mountain defend the temple ably, at least.