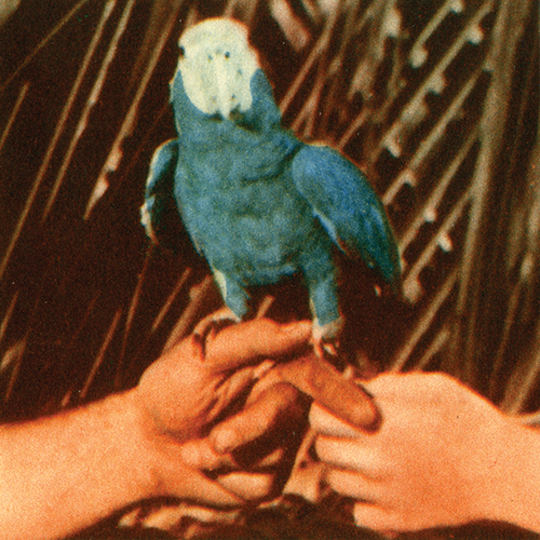 On Andrew Bird’s most plainspoken, personal record to date, opener ‘Capsized’ sets out his state of mind. Against a taut drumbeat and wandering bass-line he details waking up, post-break up: “spoon dirty laundry, you’re all alone.” The overturned ship metaphor the song hangs on is uncharacteristically blunt, the sense of wallowing and dejection outright. (As he notes in discussion of the album on NPR Music, we’ve all been there.) Are You Serious (no question mark) charts a turbulent before-and-after period in the singer’s life - a time in which he had his first child and his wife faced a serious illness - and it finds him rejecting the kind of lyrical and musical flourishes that have marked his career thus far in favour of intimacy, and a thrilling, occasionally unsettling immediacy.

“I’m gonna cut to the quick / This is all nonfiction / Words you beat with a stick / These are my true convictions” he sings on the jaunty title track. Indeed, the dropping of what he calls a “third person disguise” is evident throughout. The song pokes fun at his predilection for clever wordplay (in a winkingly clever piece of wordplay), but it isn’t the most - for want of a better word - ‘meta’ moment on the LP. That would be ‘Left Handed Kisses’, a playful, multi-segmented duet in which he faces off with Fiona Apple. The duo play diametrically opposed lovers - one a romantic, the other pragmatic - who comment on the “back-handed love song” itself, while cementing the illogic (and, in a sense, the reason) behind such an unlikely pairing. That’s a lot of ground to cover in just over three minutes, but analysis aside, it is simply a treat to hear Bird paired with another talented female vocalist; though Apple’s flinty tones are a world away from Annie Clark’s caramel turn on ‘Lusitania’, they offset Bird’s more controlled delivery in a way that makes perfect sense for the song.


A sense of displacement and unease stalks much of Are You Serious. “I once was found but now I’m lost,” Bird declares on ‘Saints Preservus’, “groping in the dark,” and easy to miss at first is the subject matter of the rollicking ‘Puma’, essentially an ode to the strength of Bird’s wife in the face of ill health. (It contains the absolutely wrenching lyric: “When she was radioactive for seven days / How I wanted to be holding her anyway / But the doctors they told me to stay away / Due to flying neutrinos and gamma rays.”) ‘Valleys of the Young’, meanwhile, very directly examines the fear that accompanies bringing children into the world, asking “Is it selfish, [or] is it brave?” The song glistens and billows, foregrounding the electric banjo and guitar work of Blake Mills, and it sounds glorious. Bird talked about aiming for something akin to Sonic Youth with more of a pop sensibility; the result is influenced as much by notions of the Dust Bowl and the stark images of that era as it is the realisation that, by having a child, you are to some degree going to have to put up with ‘having your heart constantly breaking for the rest of your life.’

Bird sounds weary and hesitant in the NPR interview, his first in promotion of the record. He professes nervousness, noting that his latest ‘feels different’ from the others. He also gently deflates the idea that there is a linear nature there, saying: ‘I’m usually thinking about modulations of keys and moods and things like that, not so much the narrative or the timeline.’ As interviewer Bob Boilen points out, however, there does seem to be a thread running through Are You Serious, however subconsciously it may have got there.

‘The New St. Jude’ marks a turning point, wherein Bird states that “ever since I gave up hope I’ve been feeling so much better.” Saint Jude is the patron saint of lost causes, and Bird’s willingness to subject himself to whatever may happen seems to represent both resignation and freedom. (The melody itself is a warm, generous thing, among the most gorgeous on the album.) ‘Bellevue’ closes proceedings by mirroring where Bird found himself on the claustrophobic ‘Capsized’: “Now I found someone… Guides my lonely ships on through the shallows.” A blissful coda, its final line recalls the way Father John Misty’s I Love You, Honeybear wound up, and the tying up of that thread that opened the album is reminiscent of the ‘narrative loop’ presented to us on Joanna Newsom’s Divers. Like those works, Are You Serious concerns itself with many aspects of the human condition, but it all hinges on the redemptive power of love: the strength we are able to offer one another and the selflessness of the act.

There is some devastating music on Are You Serious, and there is some beautiful music, too; often these passages are one and the same. It sounds like a natural progression for Andrew Bird, yet in places it’s like nothing you’d expect from the singer. It is, for these reasons and many more, a triumph.