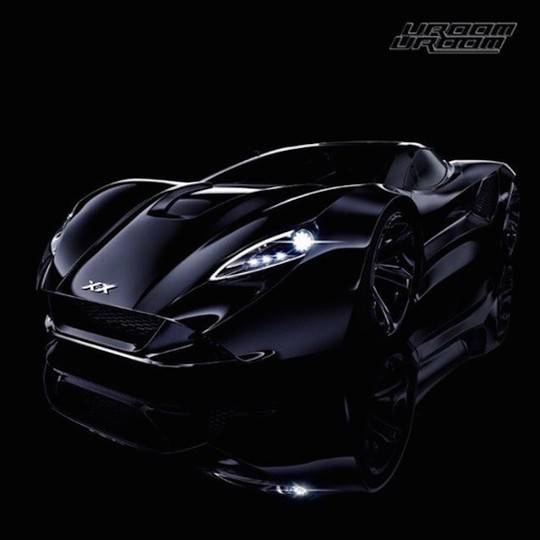 Pop music is like pizza. When you eat it alone, you can more easily acknowledge the junky properties – cliché formulas, fatty cheese – behind the savoury taste. When shared with others, though, pop music transforms an ordinary gathering into a 'moment', and even food snobs can overlook the junk. Charlotte Aitchison, aka Charli XCX, lives for that moment – you haven’t heard 'I Love It' until you’ve seen a crowd pouncing down the dance floor, everyone eager to drive their cars off the bridge. And after conjuring an international party with debut album Sucker at the nucleus, the diva’s new label Vroom Vroom seems like the next logical step to keep the summer fun rolling.

But in four songs, the flagship EP strips away the candy-hued catwalks and fist-pumping anthems that coloured XCX’s last LP, leaving booming beats, chopped-up voices, and a curtain of steam. The first dip into this new Jacuzzi feels pleasant, since Sucker’s sunny party anthems fizzled out halfway through – but XCX lacks the finesse to turn this into anything beyond a mindless massage.

Now, the label Vroom Vroom promises to purvey 'experimental pop”', but so far XCX comes nowhere near to, say, FKA Twigs’s bewitching dance from last year. If anything, this EP more evokes her jean-jacket call girl role from Iggy Azalea’s slow grind mega hit 'Fancy'. On that note, we start from the end rather than the beginning, where XCX feigns her best Rihanna with 'Secret (Shh)'. And it’s strange, particularly for a pop star who spent most of her last album laughing off men and even bragging over her prowess with masturbation. Not in this inky crawler, which amps up the freak factor with shrieking samples, inky-black synths, and XCX’s panting around the lines. “I see myself all over you, for sure / you’ve got me breaking all of the rules”. Clearly, she’s coming on to this guy. Or is it a guy? That’d explain why she wants to stay on the down low.

Still, melodrama mars XCX’s best intentions. With the slick chrome frame and the good-girl-gone-bad page ripped from the Britney Spears playbook, 'Secret' presents only a cartoon of a (lesbian?) vixen, especially with that nerve-wracking giggle. The title track is even less convincing, with the girls tanning on the beach and the token luxury sports car racing to the forefront (and the agonising couplet, “we keep it whipped and creamy / ice cubes on our tongues because we like to keep it freezy”). At least the hyperactive rave aesthetic undermines the exaggerated boom-bap beat.

In that light, though, XCX’s convergence with the pristine PC goddess Hannah Diamond in 'Paradise' is truly bewildering. What’s the deal with this sudden shot of sincerity, and all the boring sugar and light? A few more odd textures stand out, like the euphoric 'aah-ahh!' and the wonky wobbling sound in the chorus. But XCX falls flat without her signature pout (like in 'Boom Clap', which I still believe should’ve never been a single).

That leaves 'Trophy', a curious banger bred from M.I.A.’s paintball riddim and XCX’s own sassy swag. But here the conundrum emerges! Are we to believe that the whole material girl shtick becomes 'experimental' when merged with the pre-established styles of other black artists? OOOOOOH yes, I went there. Hard not to go there, though, with XCX spitting lyrics like “We spendin cos we got dis / these dollas all in my pocket”. What’s she on about, anyway – are we encouraging feminism (“all the girls round the world / now we in control “) or a catfight (“bitch I’m here to fuck you up” - unless this is the uncommon male form of bitch, like in “Bitch Better Have My Money”)?

Don’t get me wrong. I don’t believe artists need to 'stay in their lanes', whatever those lanes may be – nationality, race, gender, and so on. But XCX boils down the urban styles she borrows into PG-rated, glittery sketches of excess bling and forbidden love, removed from the reality of class divisions or labor, or indeed the outside world in general.

But, y’know. Come party time, most folks don’t care where the pizza comes from, as long as there’s cheese and crust.