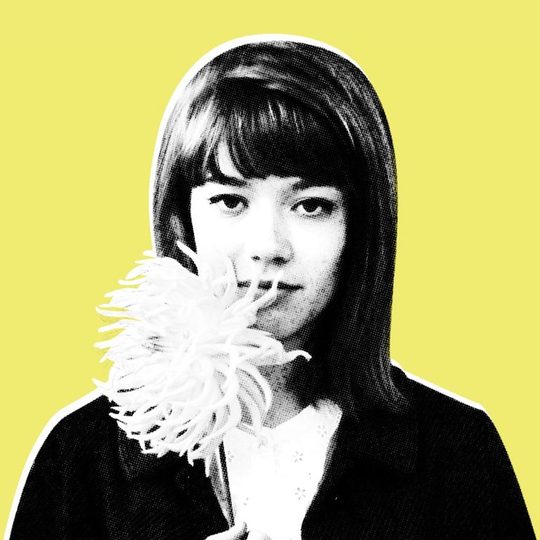 For a performer renowned for her shyness, Françoise Hardy’s television performance of ‘Le Premier Bonheur Du Jour’ is startlingly direct. The camera frames only her face, and she stares straight into the lens, locking eyes with the viewer. You can’t tell if she’s miming the guitar. You don’t know where the subtle swell of haunting strings come from. It’s a hypnotic and enchanting piece – the perfect introduction to one of France’s most beguiling singer-songwriters of the second half of the twentieth century.

This song comes from the top of Hardy’s second record – one of five reissues of her earliest albums from the ever-excellent Light in the Attic label. Documenting the first French language releases she put out at a rate of one a year in the mid-Sixties (leaving out the Italian, German and English language records she also put out in these highly prolific years) these albums chart the rise of Hardy’s fame, and the fast maturation of her artistry.

She didn’t emerge fully realised, of course – or at least, she wasn’t given the chance to. Her first record sticks out like a sore thumb. It’s the product of a patriarchal music industry which – as Björk will tell you – hasn’t really changed much over the last 50 years. Untrusted to shape her own material, Hardy was paired with a carousel of collaborators in an attempt to market her as a teenage rock n roll starlet. The US edition of the album even slapped on the cutesy title The Yeh-Yeh Girl From Paris!

The arrangements are simple guitar and drum, with peppy jazz tempos and obvious influences galore. It’s a whimsical and catchy collection, but shallow compared to what she recorded over the decades to come. Happily, it was her own contribution – the sultry waltz ‘Tout Le Garcons Et Les Filles’ – which gathered the most acclaim, rather than something like the try-hard wannabe hit ‘Oh Cherie’ which could have set her on a commercial path she may have struggled to turn back from.

In many ways it was an odd song to enjoy such success. Translating the lyrics of Hardy’s songs is a sad affair, best done with a glass of wine – “I’m single, with a tormented soul. I’m single because nobody loves me” being a typical example from her first hit. Sure, 40 years later, 16-year-old pop stars would sing stuff like “my loneliness is killing me”. But lines as horribly existential and unguarded remain out of step in teen-pop even today. This remains Hardy’s singularity.

Her drift into solitude and melancholy really kicks in from Le Premier Bonheur Du Jour, tinkering with new arrangements to suit the mood – sober electric organs and weeping strings lapping against the sides of the songs. But no matter how vast the instrumentation became, she would always stand as a stark, isolated figure at their centre; calm, vulnerable, and faintly aloof.

A poem written for her on a Bob Dylan sleeve sent Hardy’s crippling shyness hurtling towards the excess of the decade, with unsurprisingly awkward results. She became a mysterious socialite of the era – dining with the Beatles, hanging out with Mick Jagger, appearing with Peter Sellers in Woody Allen’s first movie. Yet, throughout her entire career, she never carried out a single tour. She remained a distant and distinct figure. Her music kept a quiet, autumnal sadness, incongruent with the glamorous image she gained over the decade.

Still, you can hear her gaining confidence. Around this time, Mon Amie La Rose finds Hardy at her most brash and self-assured, experimenting with a broad range of styles and sounds. The influence of Phil Spector is becoming evident here, with thick, woozier textures slathered over her songs. The drums of ‘Je Veux Qu’ll Revienne’ gallop; the guitar line of ‘Je N’Attends Plus Personne’ drawls through a bluesy, scuzzy slur. Here is the sound of someone becoming comfortable in their performance, if not in themselves or their fame.

The equally charming L’Amitie still sees her testing things out - swinging from shimmering open chords to the more theatrical sweep of someone like Michel Legrand; a mode which she would expand upon throughout her career. But it’s not until La Maison Ou J’Ai Grandi that she really settles into her sound, giving us a glimpse of the performer we can still recognise as a 70-year-old, on her most recent – and reportedly final – album L’Amour Fou a few years ago.

Fifty years on, she sounds more mature, but no older. Much about her is still the same as when she was finding her voice over the course of these recordings. She’s still never toured. She’s still extremely shy. She’s still making gorgeous and romantic music. And she’s certainly never been the Yeh-Yeh Girl From Paris. Then and now, her records are unmistakably the output of the same incredible artist – a complex and contradictory figure, both utterly withdrawn and utterly forthcoming.