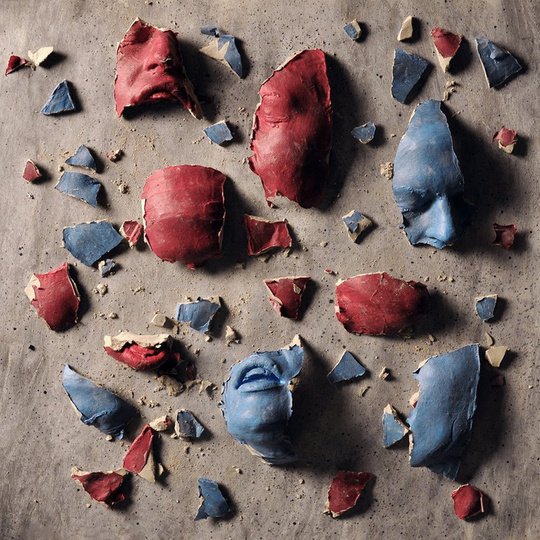 Having been in the music writing game for a few years now I can testify that – a lot of the time – it’s full of disappointments: inboxes full of bands struggling to live up to the hype of their press releases. Every now and then, however, a band pops up and makes it all seem worthwhile. The arrival of Post War Glamour Girls’ debut EP Tragic Loss; He Had Such a Lovely House through my letterbox in 2012 provided one such moment. That last year’s debut full-length Pink Fur was such a triumph was the icing on the cake: the confirmation that this was a band set to live up to the enormous amount of potential they had shown on their earliest releases.

Much like its predecessor, which began with the colossal ‘Sestra’, Feeling Strange doesn’t hang around. Opener ‘Felonious Punk’ clatters out of the starting blocks, dominated by fuzz and vocalist James Smith’s typically confrontational vocals. Clocking in at under three minutes it also includes one of the band’s finest – and most accessible – choruses to date as well as lashings of the classically off-kilter, dark post-punk atmosphere which the band have been able to summon effortlessly since the start of their career. Following it up is ‘Wax Orphans’, on one level the closest thing the band have ever written to a straightforward pop song and on another a delightfully ambitious and distinctive coalition of textures and techniques. The excellent contributions of the band’s bassist and secondary vocalist Alice Scott are also particularly impressive, with her and Smith working together to glorious effect on another naggingly memorable chorus.

‘Southpaw Stance’ is another track that is indicative of the band’s development since Pink Fur. With the group’s usual set-up augmented by subtle keyboards, it demonstrates an ever-greater confidence in marrying the two sides of the quartet’s personality: that dominated by barely concealed aggression and that shaped by a more subtle understanding of Smith spits his caustic lyrics like a delirious hybrid of Nick Cave and Mark E Smith, whilst the music veers closer to the cinematic tendencies of late-Eighties Cure. On the eight-minute ‘Cannonball Villages’ the latter strand of the band’s approach reaches its most complete realisation to date. It’s a true slow-burning epic that builds and builds to a genuinely haunting climax.

Crucially, despite the various comparisons that can be made between Post War Glamour Girls and other groups, nowhere on Feeling Strange do the band really sound like anyone else. There are reference points certainly, but such is the conviction with which the quartet go about their task that throughout their sound remains their own. This is partly the result of the band’s songwriting confidence, which has seen them progress to the point that this second album could easily be mistaken for a fourth or fifth effort, but it also reflects a simple knack for making good decisions. There are plenty of occasions on this record where other bands would have unnecessarily opted to turn up the volume or to dial back the aggression, but Post War Glamour Girls get this crucial balance just right.

Perhaps Feeling Strange’s strongest attribute, however, is its simple replay value. Even more than its predecessor, this is a real grower, one of those rare albums that gets better with every listen over a prolonged period of listening. At this rate of development Post War Glamour Girls are set to be a band of rare distinction indeed.