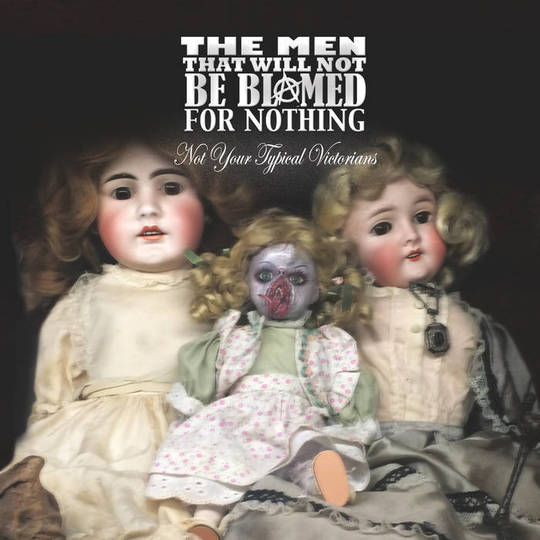 The Men That Will Not Be Blamed for Nothing are a steampunk band that… Wait! Come back! You don’t need a top hat and goggles or an overly elaborate corset with a cogwheel motif to listen to this band. There are no airships on this record. No clanking steam-powered automata. Instead The Men That… inhabit Victorian personas in order to poke at the seedy underbelly of Victorian society (as well as our own) with a sharp and very grotty stick.

The sound on Not Your Typical Victorians takes all of its cues from the second part of the steampunk title: it is punk through and through. In fact, with its thumping 4/4 beat, driving barre chords and chant-a-long gang vocals this is one of the most unreconstructedly punk things you might hear all year. Production of the album was delayed by frontman Andy Heintz’s throat cancer, now in remission, and you can hear in the shouted urgency of almost every track here the sound of a man glad to have the chance to get behind the mic again. On songs like ‘Clean Sweep’ and ‘Miner’, Heintz rails against the injustice of a society that treats its lower classes as expendable cheap labour doomed to a life of appalling squalor and hazardous working conditions. There’s an anger and an energy to these songs which is the most appealing thing about Not Your Typical Victorians.

All of which would be for nothing if the lyrics weren’t up to scratch, but fortunately they almost entirely are. ‘Vive La Difference Engine’ is the only song with a classically Steampunk bent to the lyrics, borrowing its subject matter, and the terrible pun in the title, from pioneering Steampunk novel The Difference Engine. For the rest of the album The Men That…, apart from a few detours sending up the ridiculousness of their own Victorian personas (“I’m not even that keen on steam!”), focus on putting the boot into social injustice. ‘Third Class Coffin’ is a prime example of this, detailing the differences in the treatment of each social class after death: “Us third class coffins / they pile on the paupers / One on top of another.” Singing in the voice of a third class citizen, and a dead one at that, makes the song an effective way bludgeoning home Heintz’s point although at the expense of any subtlety at all, the song ends with the bellowed refrain “A third class citizen, even when I’m dead!”

The songs lack subtlety but they certainly don’t lack for humour. In the title track Heintz subverts expectations of Victorian values, “I’d happily blow up the Queen!” and the Steampunk genre itself, “I’m not even that keen on steam!” ‘(I’m in Love with) Marie Lloyd’ is a genuinely funny tale of a music hall stalker’s delusions of requited love being constantly undercut by reality. In fact if you’re someone who has ever watched the BBC series Horrible Histories you may find that these songs remind you of the catchy songs they produce about the grotty side of history. Reminding you of a children’s TV series is not intended as a criticism incidentally: the songs of Horrible Histories are a hugely successful phenomenon because they’re full of energy and a dark humour.

The main criticism that can be levelled at Not Your Typical Victorians is that is suffers from mid-album-lull syndrome. ‘The Worst Sideshow Ever’ is a dirge which lacks the album’s typical humour and pace and instead lumps along slowly listing the disappointing freaks on display, “The giant is a bloke standing on a box / Wearing a really long coat.” After a few sub-par tracks, though, things pick up again with ‘Miner’, The Men That… sound on more certain ground when they are complaining about social justice again.

One of the odd things about current trends in music is that we don’t really – a few pockets here and there aside – have a coherent protest scene. We live in the age of austerity when the rich are getting richer, the poor are getting poorer and social injustice is on the rise and yet… where are our punks? Where are the bands who want to smash the system? The Men That… provide us with something, albeit a niche something, to fill the gap. The problems of commodification of the working classes and real human beings being caught in the grinding teeth of the cogs of capitalism are with us today just as much as they were in the Victorian age. If you can’t imagine George Osborne in a stovepipe hat gleefully announcing the reintroduction of workhouses for paupers then you either have no imagination or you don’t know who George Osborne is. With their grimy take on Steampunk with the heavy emphasis on the ‘punk’, The Men That… give us a good clutch of songs for protesting injustice, in whatever century it is encountered.