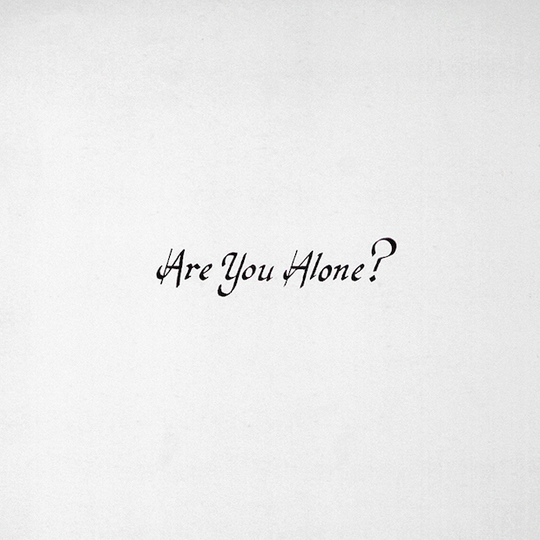 It's safe to say that a downbeat, electronic indie album, heavy on the synths and hot on the topics of obsession, loneliness and the fear of love is not such an anomaly these days. Can Montreal duo Devon Welsh and Matthew Otto aka. Majical Cloudz take these elements, all staples of their new album Are You Alone?, and make them special?

Let's start with the unforgettable showstopper: latest single 'Downtown'. It's a soaring, yearning ode to obsessional desire, which somehow manages to sound beautiful rather than creepy. Even the line "If suddenly I die/I hope they will say/That he was obsessed and it was OK" is so in keeping with the intensity of declarations throughout Are You Alone? that it feels completely understandable, even to one who lacks a crazed obsession. During the refrain of "Is it really this fun when you're on my mind?" Devon Welsh's strong, soulful voice first sighs then booms. It's the best song on the album, but then anyone would be hard-pressed to write another one this good.

Elsewhere, the lyrical theme of obsession continues. In 'Control' Welsh booms out the questions "Would you control me?/Would you lock me up and never set me free? . . . Can I dress up in your clothes and be somebody new?" Obsession has a redemptive quality, at least to the obsessed, not always sounding unappealing. This will probably make sense if you've ever kept going back to a terrible relationship or been drawn to something really bad for you. And who hasn't?

Are You Alone? isn't completely despairing. Its title is a genuine question and the possibility of reaching out is raised several times. On opener 'Disappeared', over piano that sound like the soundtrack to a melancholic Eighties European film, Devon Welsh beseeches "Those that forever disappear/All I want is for you to come to me the way you used to do". If asking the forever disappeared to come back seems a pointedly hopeless task, final track 'Call on Me' holds a bigger flame of hope: "I am your friend till the end of your life . . . I cannot believe/In 1988 we were born we survived/At the moment I sing we're alive".

Musically, the album is a little samey. As I get to track number seven, 'Change', my first thought, ironically given the title, is 'haven't I heard this drumbeat before?' It has to be said that to the untrained ear there isn't a massive amount of variation on the drumbeats used throughout, and all the songs are of a similar tempo. There could be a risk of Are You Alone? trying the listener's patience or getting relegated to background music. What saves it from this fate is the beauty of the music and lyrics, the strength of Devon Welsh's voice and the fact that the duo are so excellent at creating mood.

If you're not interested in music that makes you feel reflective then perhaps steer clear, otherwise this is a stark, brutally honest exploration of the human psyche that is indeed special.