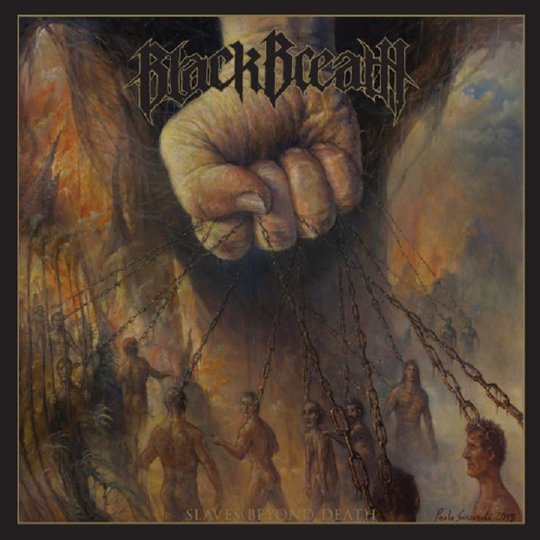 Seattle’s Black Breath have apparently been making a big splash in the old metal world for a little while now and I can’t imagine that third album Slaves Beyond Death will do anything but increase said splashing.

For all the talk in the press release about brutality and ferociousness (of which, don’t get me wrong, there is plenty on this album) it turns out there’s more to Black Breath than heaviness for its own sake. A potential pitfall for this kind of music is that too much unrelenting, crushing heaviness can get a bit overwhelming, and one can become numbed to the onslaught. Slaves Beyond Death comes close to having this problem a few times, it’s true: a couple of the tracks come and go without making as much of a lasting impression. However, there’s a sensibility here - I hate to be so ignorant as to call it more 'refined' - a greater appreciation of structure and tone that lifts the album above simple tactics of repeated bludgeoning.

All of the eight tracks run over five minutes long, and most of the time Black Breath make good use of the time. ‘Pleasure, Pain, Disease’ and ‘Arc of Violence’, for example, both start with long instrumental sections in which the band take their time to string together an impressive variety of riffs in interesting progressions. ‘Arc of Violence’ has a fade-in intro that breaks into a classic Slayer-inspired riff, which in turn gives way to a black metal-esque tremolo part, and that’s just the first minute. Sometimes it feels like there’s almost too much going on.

With all this quality musicianship It almost comes as a disappointment when the vocals turn up: on Slaves Beyond Death, as with so much metal, they are by far the weakest section of the band. It’s hardly surprising, then, that the best track on the album is an instrumental (but more on that shortly). This is a thing one has to learn to accept as a metal fan, so that highly-average death metal screams don’t get in the way of the instrumentation too much. It would be a different matter if the vocals were saying anything interesting but a quick glance at the lyric sheet shows no deviation from the usual obsession with death and suffering.

Lucky, then, that the music is so well put together. Evidence of a more advanced approach to songwriting is to be found in other songs as well. The dissonant, oddly-timed riff at the beginning of ‘Burning Hate’ is instantly arresting but the absolute best stuff on the album is the classic metal side the band show on ‘Seed of Cain’ and instrumental finale ‘Chains of the Afterlife’. Clean intros and doubled guitar leads may not scream brutality, but they do demonstrate a variety that raises Black Breath above the horde. ‘Chains of the Afterlife’ is probably the least heavy song on the album but it is the most interesting. It reminds one of classic Metallica at their most anthemic and if ‘Chains of the Afterlife’ is Black Breath’s equivalent of ‘Orion’ well then what better way to announce that you’ve arrived as a metal band. Perhaps pushing their relentless extremity of the music is not the best way forward: there’s a more nuanced, skilled band lurking in here and it will be interesting to see to what extent they are allowed to emerge.