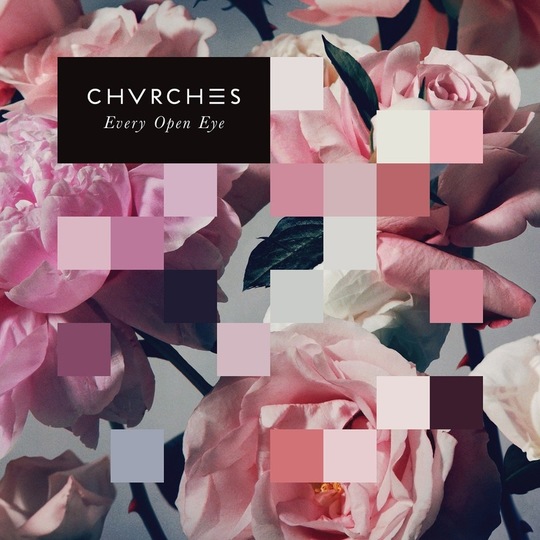 Polemics in The Guardian, segments on Channel 4 News, feminist websites and Twitter sparring - sometimes it seems Chvrches are more of a political force than a musical one. Sure, for a while there 'The Mother We Share' was as ubiquitous as the wind and festival organisers the world over might as well have worked from a lineup template with their name already watermarked, but two years on from their debut the conversation is rarely about the band’s music.

And hey, that’s probably how it should be - Lauren Mayberry’s tireless work in calling out the internet’s misogynists is more important than cut-up melodies and neon beats and choruses the size of Unicron. But they’re what we have to talk about nonetheless, and draped across second album Every Open Eye like winter coats, warm and enveloping if a little smothering.

Not initially, mind. 'Never Ending Circles' is an immediate rush of rhythm and verse, a damn-near perfect example of what a three minute pop song can do that almost, almost reaches up to the level of its predecessor’s opener. Ditto 'Leave A Trace', a sultry and compulsive track that throws Mayberry’s voice to the fore, lyrically defiant and sonically fierce.

But we’ve already heard those, right? As for the rest, the press release states the aim as being ‘to do more with less; to make something intense and urgent and visceral’ - and yeah, tracks such as 'Keep You On My Side' and'Clearest Blue' pound pretty relentlessly, the drums pneumatic and the synths cocaine. But in paring back they’ve lost something, song structures blurring into a smudge of overfamiliarity that start to wear more than they exhilarate somewhere around the halfway work and Mayberry’s voice not quite enough to hold attention.

Luckily that’s the point where Martin Doherty takes over, mirroring his midpoint vocal turn on Bones’ 'Under The Tide' with 'High Enough To Carry You Over', an Eighties-indebted slow-dance of minimal loops and lyrical yearning that’s closer to the fractured binary of recent Errors than to the rest of the Every Open Eye’s overwhelming gloss: the crack in Doherty’s voice in the opening verse is possibly the rawest thing on it, a moment of sweet, sad conviction amidst the octane pulse.

It grows exhausting, that pulse, 'Empty Threat' and 'Bury It' are both fine examples of Chvrches’ knack for making anthems seem effortless but drowned here in an album that only seems to want to do that, that gets stuck on a one-note of emotive swell as if fearful that otherwise our attention might wander. The lowest point is 'Playing Dead', a school-disco dirge that strives for transcendental but comes off like karaoke, the barest remove from the stuff of Saturday evening talent shows with revolving chairs and tear-streaked celebs and mawkish, awful backstories.

Which is a shame, because I love Chvrches. The Bones Of What You Believe was easily one of the best releases of 2013, an uncompromising show of force and passion that took a pop template and bent it into a fist, a fuck you aimed at anyone that felt that indie stalwarts such as Cook and Doherty shouldn’t be dabbling with synths and choruses. By contrast Every Open Eye seems neutered, the rough edges sanded back on an album that fits a mould more than it breaks it - which given the band’s confrontational media stance seems something of a waste.