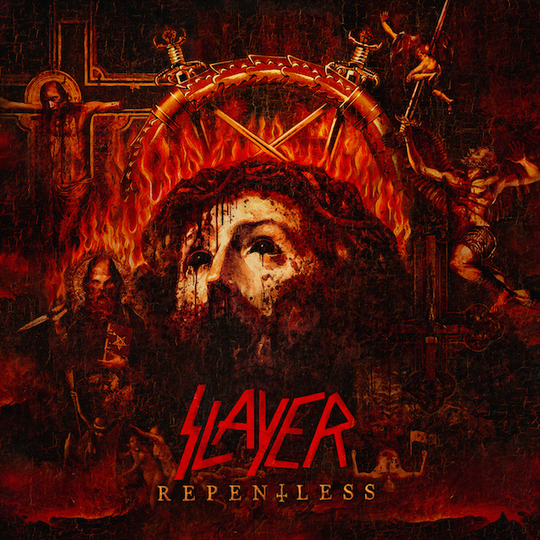 It seems fitting that I still have the memory of Metallica’s headline set at Reading relatively fresh in my mind as I write this review. In the world of the ‘big four’ thrash bands (Metallica, Slayer, Megadeth, Anthrax, as if you didn’t know) there are really only the big two: generally speaking you’re either a Metallica person or a Slayer person. I used to be the former, and fervently held Metallica’s willingness to try new things, to evolve, against the fact that Slayer seemed content to make the same album over and over again.

Now I’m not so sure. For one thing, Metallica haven’t released an album in seven years, and a good one in more than double that time, whereas Slayer have been steadily putting out decent releases. Maybe I’m just getting old but there’s almost something quite soothing about the fact that Slayer always continue to do what they do. So much in this world is uncertain (and Slayer would be the first to tell you, albeit in very vague terms, about the worst of it) but there’s a comfort in knowing that the next Slayer album will be fast and brutal, won’t have a rap, won’t go anywhere near a ballad, won’t kowtow to any kind of rock music fad. As someone who can barely commit to a haircut it’s kind of impressive to see a group of dudes dedicate their entire life to making the fastest, most intense metal they can with no thoughts of compromise. There’s something hilariously admirable about hearing a 54 year-old man scream “Let’s get hiiiiiiiiiiiiigh! So fucking hiiiiiiiiiigh!”, as Tom Araya does on the enjoyably silly 'Vices' (he’s talking about violence being the ultimate drug but, come on Tom, you know how it sounds). Would that I had a tenth of his passion.

What I’m trying to say is that Repentless is, fundamentally, a Slayer album, no more, no less. It’s got creepy, religious themed cover art and a whole lot of very good, very fast riffs, thunderous drums, ridiculous solos and Araya’s aforementioned trademark frantic yelling. There are absurd song titles galore: 'Delusions of Saviour', 'Atrocity Vendor', 'Pride In Prejudice' - and the latter two are actually two of the best songs on the album. There’s some vague lyrics about death, religion, suffering, politics etc. but obviously nothing that could pin the music down to a particular time.

However, even Slayer are not completely immune to the passing of time. The big question hanging over Repentless is what effect the 2013 death of Slayer founder Jeff Hanneman would have on the their first album without him. The answer is: not an enormous amount. Even though Jeff wrote pretty much all the best Slayer songs ('Angel of Death', ‘Raining Blood', 'War Ensemble', 'Seasons in the Abyss') it seems that the band are bigger than any one person, even one as obviously essential to their sound as Hanneman. His one writing contribution on Repentless - the unusually-named 'Piano Wire' - is still a stand-out and features a really interesting post-hardcore style riff that shows Slayer aren’t complete dinosaurs. But at this point I think the band could lose every member and still make an album that sounds basically the same. Perhaps if new guitarist Gary Holt, formerly of Exodus, had been allowed to do more there would have been a noticeable change of sound, but apparently all the rhythm work is by rock’s oldest, grumpiest teenager, Kerry King. Holt does play some solos, though, which may explain why they’re so good: despite his technical skill King’s solos are renowned for being somewhat atonal and chaotic.

Nor is Hanneman’s death the only major personnel change here. Paul Bostaph returns to the kit for the first time since 2001’s God Hates Us All and, fair play to the guy, he really gives it some on Repentless. He’ll never be regarded as well as Dave Lombardo, who was booted out in 2013, but his work on 'Repentless', 'Take Control' and 'Atrocity Vendor' is phenomenal. He’s also helped by first-time Slayer producer Terry Date, who brings an amazing crispness to the whole affair that really helps the drums stand out, and emphasises the classic Slayer heaviness. At times, though, this cleanness goes too far and gives the whole thing a nu-metally vibe (unsurprising, given that Date has worked with Slipknot, Limp Bizkit, Deftones and KoRn) or an overly trebly feel that’s overwhelming for the wrong reasons. But in general Date is a great match for Slayer, especially as Rick Rubin is apparently not the producer he once was.

You’ll notice I haven’t talked too much about the individual songs here and that’s because, like all the good Slayer albums, they tend to blend into one ferocious assault. As I said earlier Repentless is simply just a Slayer album: if you’re a fan you’ll know what that sounds like and you won’t be disappointed by Repentless. If you’re not, well you’ll probably still find much to enjoy until the next Metallica album finally comes out.