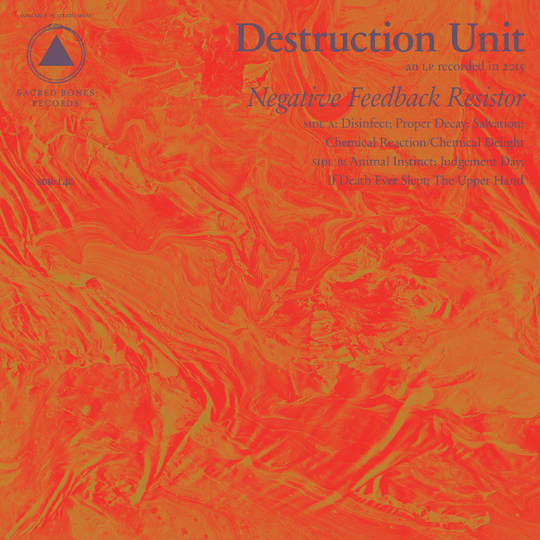 I was waiting for the Spring Street subway when the middle rail erupted with electric noise. It was rust scraped along rust, the rust of the rails and the rust of the weight-bearing train wheels. The ceilings were low and the walls were close, so the sound had no room to expand, no space to fade and dissolve. It was a genuine screech, and it occupied every ounce of my awareness. I had been thinking about something else but it didn't matter. The collective howl of the metropolitan grind had obliterated everything else.

I mention this because it more or less aligns with the mission statement of Destruction Unit’s latest, Negative Feedback Resistor. Not everyone has the benefit of a press release, so to give you some idea, here are a few memorable phrases: 'For two years now…Destruction Unit have been…pushing the freek agenda and imminentizing the alien-eschaton…battling the greedy club owners, show promoters and control pigs to bring the new American heavy underground through your back door.' Its intended purpose is put forth: 'To break the chains which you, at the dawn of your understanding, have fastened around your hands and feet. And to see to it that the thrones of every despot erected within you are destroyed.' So, make no mistake, this is music with a mission. The mission: enlightenment, or, at very least, disillusionment.

The primary weapon they employ is consistently smart production and innovative song structuring. The sonic palette could well be described as some sort of bludgeoning apparatus: the guitars tend to be uber-distorted, the drums tend to be pummeled. The vocals sound as if an inmate locked himself in a room with the asylum’s PA. And you never feels like it's gratuitous. It comes across as a carefully crafted arrangement of sound.

The unique song-structuring makes especially good sense in light of their stated mission. If their goal is to undermine listeners’ basic assumptions, it follows that they wouldn’t want their listeners fully at ease. Among the most poignant examples is the penultimate track, 'If Death Ever Slept', whose slight 2:59 length led me to believe that it would be a somewhat more straightforward punk-infused sprint. Instead, it shifts phase just as rapidly as any of its neighbors, and then finishes quickly, propelling the listener into the album’s closing track, 'The Upper Hand'.

Elsewhere, song lengths frequently exceed five minutes, and never stay in one place for long. Centrepiece 'Chemical Reaction/Chemical Delight' stretches nearly to nine minutes, and undergoes seven shifts of phase before hurtling to its conclusion. The album as a whole reads like a single track; one song’s concluding sounds serve as the introductory sounds of the next. The closest thing Negative Feedback Resistor has to palate-cleansers are its periodic krautrock segues, which sometimes bookend songs and sometimes split them down the middle. But they, too, are distressing in nature, so it’s inaccurate to think of them as genuine reprieves.

The effect, altogether, is one of decided overwhelm. Which I’m sure is exactly how they want you to feel: they, like all musicians, want your full attention, and use the same method as the screeching subway train in reaching for it. As to whether this makes their disillusionment mission successful, your guess is as good as mine, but I’m sceptical. I like my music entertaining and informative, hopefully even deeply beautiful, but I don’t look to music to save my eternal soul. And, having been down in the swamps of weird-trip territory myself, I’m extremely wary of LSD rhetoric. It resonates well with people who’ve been there but alienates people who haven’t. What I’m saying is this: I get what they’re trying to do. Really, I do. But I don’t think that kind of disillusionment is a power that music can inherently carry, except incidentally, and with a host of other factors happening to the listener as they listen. You’ll probably like this album if you’re a metal fan. But don’t expect it to enlighten you.