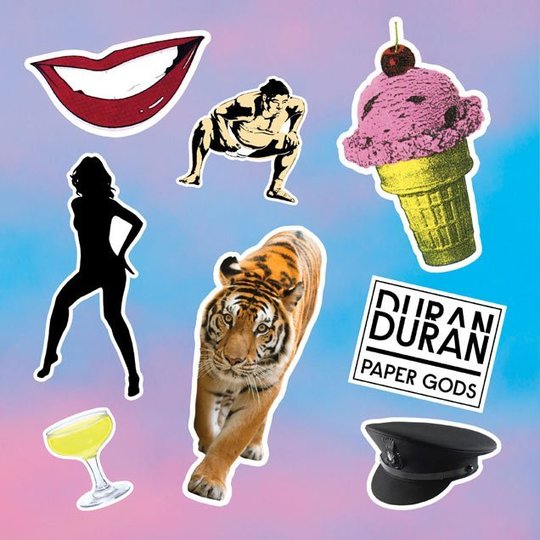 It’s pretty interesting living in Birmingham. While the rest of the country gets excited by Peace, Swim Deep and the likes, you’ll only find any response at all in the city if you know where to look (notably Digbeth). In other genres, there’s a similar response to talents like Hannah Wants. There’s not a great deal of awareness in the general population. The lack of pride in local talent compared to other cities (Manchester, Leeds, anywhere) can be a source of bafflement.

Instead, mostly unfashionable bands like UB40, ELO and, yes, Duran Duran seem to get most of the love from the locals. Even Black Sabbath seem to somehow dodge some of the reverence that goes to the names above. So it’s with some interest and trepidation that I approach this review of the new album by Duran Duran. Can Paper Gods show me something new to suggest that they deserve the local idol worship?

The problem when a band like Duran Duran rear their head again is that at this stage of a long career, they might have genuinely run out of ideas. A huge catalogue of artists contributing to the recording and writing process would only appear to back this up to at least some extent. Mr Hudson, Kieszha, Mark Ronson, John Frusciante and Nile Rodgers are all present in some form as the band make clear quite early their intention to make this electronic record a very relevant affair.

The title track sees an opening with a church choir-like voice that echoes throughout – it's a huge opener. It lasts over the seven minute mark and while it brings it new ideas, it also establishes the fact that the electronic elements of Duran Duran will be sticking around on this album.

Kiesza immediately bursts into ‘Last Night in the City’ and marks her presence. Lyrically, it's standard night out fodder with lines like "this is our time" and "we're gonna live this night, live it like it's our last night." In terms of overall effect though, it’s the old bloke who refuses to stop going to night clubs. That’s either very uncool or supremely indifferent depending on where you’re looking at it from.

‘You Kill Me With Silence’ has a chorus of pure pop but the verses are understated works that provide some much needed contrast to the rest. It's atmospheric and has the potential to be a real slow burner live.

The presence of Nile Rodgers is immediately clear on single ‘Pressure Off’. His guitar playing style is all over but it hasn't created a sure-fire hit in the same way that it did with the likes of ‘Get Lucky’. Still, it's a solid track and guaranteed to go down well with veteran fans at live shows that might not pick up this record.

‘Face for Today’ is pure filler while ‘Danceophobia’ steps firmly back into the realms of elder fellows too old for the nightclub. It sounds like the sort of track a band playing their own tracks in a Reflex or a Popworld might play. It’s there for someone but not for me and probably not for you.

The album flips halfway and becomes moderately impressive - like the first half of Paper Gods was merely the band attempting to shake off any rust they might have in the studio. ‘What Are the Chances?’ shows off a rare vulnerable side twith a killer line in "is it out of choice that you're here next to me?"

‘Sunset Garage’ then marks the happiest point of the album with pure Duran Duran hooks. The line: "whatever happens we're okay, hey we're still alive" gives away the sort of vibe that it's going for.

Closing tracks ‘The Universe Alone’ starts slow and beautiful, it soon morphs into a claustrophobic and distorted bass-led song which eventually gives way, once again, to a choir. The album closes in the same way it starts with ‘The Universe Alone’ confirming the record as one that grows stronger towards the finale.

It’s hard to give a score to Paper Gods. It’s not going to convince anyone new to pick up Duran Duran's records and it doesn’t surpass their previous work. If you’re a fan you might not look at it in the best light and if you’re not then there’s nothing here for you anyway. You probably won’t even be listening to the album or reading this review.

Still, there’s enough here to show that they’ve not quite spunked all their creativity up the wall and it’s not a bad album at all. They’re not a spent force and the second half is worth anyone’s once-over. There’s not, however, enough to suggest that their next record or next show might be worthy of whatever legacy they’ve carved with their past. Collaborators or not, the days of real credibility are behind Duran Duran but they’ll continue to provide a nostalgia hit for those looking for it.