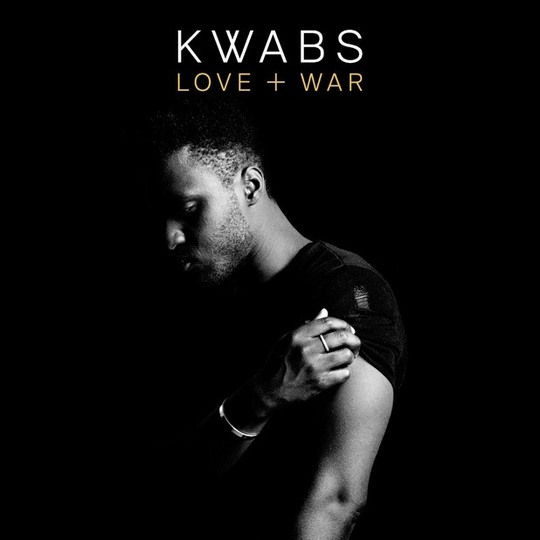 To say that Kwabs’ debut album is hotly anticipated by the pop-disposed is an understatement rivaling on a par with saying Kanye West has become slightly distanced from reality recently, or Lady Gaga has a penchant for eye-catching dress. The south London-based singer (AKA Kwabena Sarkodee Adjepong) has been heralded as the next big thing ever since he first came to prominence in 2011 with stunning viral YouTube covers of tracks by James Blake and Corinne Bailey Rae. Debut album _Love + War has been four years in the making, seemingly delayed innumerable times. But are its dozen tracks of electro-soul worth the wait, and do they mean he’ll be catapulted into the big league of pop superstardom?

Kwabs certainly possesses a formidable vocal instrument – a luscious, impressively controlled baritone which one minute can soar with sublime grace, the next can make the skin crawl through deep, breathy intimacy. It’s perfect for emotive tales of relationships gone awry but such is his vocal control that the songs never collapse under their own weight. Take for instance, the grinding electro-blues of stand-out track ‘Forgiven’ – in the verses, all guttural growl ("What’s a man without a soul?", laments Kwabs over burbling synth bass) before the clouds part revealing a skyscraping, impeccably-delivered bittersweet chorus. Similarly, the 36 tracks of vocals on the climax of early single ‘Walk’ result in a deliciously headspinning tumult. It’s deeply impressive set of pipes that means some occasionally clunky and clichéd lyricism can be forgiven.

Where Love + War does dip slightly is the fault of some jarringly schmaltzy arrangements, primarily toward the back end – a surprise given the talent of those on production duties, including Vienna-based knob-twiddler Sohn. These unfortunate slip-ups are accentuated in the final third of the album, which pales in comparison to the stronger two sections that preceded it – the first few tracks sophisticated yet radio-ready pop bangers, and the dense core of the album comprising of introspective bass-heavy numbers. One listen of the saccharine-soaked, over-produced chorus of ‘Make You Mine’ will have you dredging up repressed memories of suburban roller discos from your early adolescence. It’s in this section of the album that you get the sense of the curtain being pulled back, revealing Kwabs’ artistic hand being guided by benevolent – but ultimately stifling - other hands that mask what made has made him such a compelling prospect.

Love + War is a solid – if imperfect – debut which demonstrates a serious talent whose star will undoubtedly ascend. To what heights only time will tell, but bet against Kwabs making the big leagues at your peril.