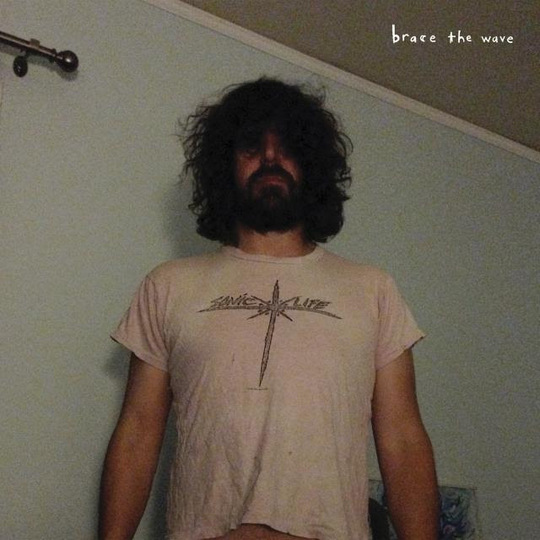 You don’t need to be especially well-versed in the ins and outs of Lou Barlow’s three-plus decades in music to know that he is not a man unduly concerned with refinement or polish. Sebadoh are the very epitome of rough-around-the-edges lo-fi, burying melody and - often - poignancy behind layer upon layer of thick scuzz. Dinosaur Jr., too, of whom Barlow has been a key member during their most successful periods, are hardly the slickest operators in town, with reverb and sheer volume long established as the most effective weapons in their arsenal. Even the cover of this new solo album - Barlow’s third under his own name - is enough to give the game away; his face is almost entirely concealed by a rampant mess of fringe and beard.

The conventional wisdom, whether accurate or not, is probably that Barlow’s penchant for sonic opacity is designed to offset the ordeal of so often being so emotionally open. If that’s the case, it should - in theory - make Brace the Wave his barest record yet, because the trademark fuzz is conspicuous by its absence. It still sounds as if it was recorded in a shed, of course, but the lack of drums and dearth of effects on the guitars - even when they’re electric, which isn’t all that often - mean that Barlow has precious little to hide behind.

In places, this works precisely as you’d hope; things start promisingly with ‘Redeemed’, which begins in sparse fashion before careening towards emotive, wordless vocals at the climax, set against surprisingly chirpy fretwork. On ‘Wave’, Barlow’s vocals are crisp, he’s backed only by a couple of acoustic guitars, and the song’s refrain - “I leave you alone, but don’t go” - cuts straight to the heart of the topic he seems to be wrestling with throughout Brace the Wave; his distance from his family when he’s constantly on the road. ‘Nerve’ is another standout; the composition is simple, with only flickers of electric interrupting the plod of the acoustic, and Barlow is on classic lyrical form, simultaneously apologetic and angry.

Elsewhere, though, the record sounds oddly pedestrian; given that both the sound of Brace the Wave and the circumstances surrounding it, you’d be forgiven for thinking we were in for a passionate tour-de-force, but it never quite materialises. Shorn of its usual cloud of distortion, it turns out that Barlow’s voice, more often than not, is lacking in genuine emotional clout; even when the lyrics hit the mark, it feels as if he’s striking from a distance. The tracks seldom feel as bare-bones as you suspect they’re supposed to, either; there might be no percussion on the album, but Barlow finds ways to fill the sonic space they leave anyway, and on the crowded ‘Moving’, for instance, it’s to his detriment.

Barlow aficionados will find plenty to like here, and it’s certainly a refreshing change of pace given that he’s been in full-steam-ahead Sebadoh mode for the past two or three years. For everybody else, though, this feels like an opportunity missed; his defences are never truly down, and we’re only offered tantalising glimpses of what might have been.