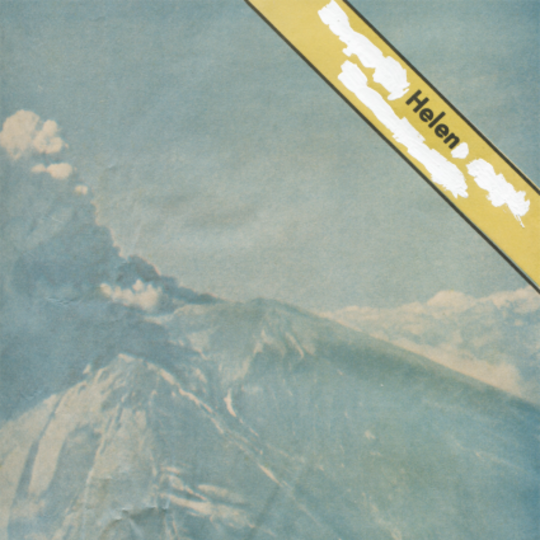 A trio led by Liz 'Grouper' Harris, Helen began with the ambition of being a thrash-rock group, which is easy to understand from even the most cursory listen to their new LP, The Original Faces. The rhythm instruments are unrelenting: distorted, uptempo, furious. But, they say, the sound became something they weren’t expecting as the project evolved. It’s ultimately difficult to say what exactly this is. I’ve heard it described as ‘noise pop’; it would be possible to group them under the seemingly limitless umbrella of ‘alternative’; they just call themselves a pop group, which, in its simplicity, is intriguing enough to fit perfectly.

Helen don’t want me to know exactly what they’re singing about, because they’re not singing about anything exact. Apart from the titles of the songs, there is nothing to say that the subject matter of one song has different origin than the subject matter of any of the others. That’s the way they’d have it, and it works to beautiful effect. Glittering between industrial rhythm instruments are Harris’s unutterably charming, light-as-a-cloud vocals which, in refusing to utter a single articulate word, aim to resonate somewhere south of your head. The effect of listening to The Original Faces is not altogether different from that of listening to music in a foreign language; without the implicit pressure of having to decipher it, you listen from a relaxed, open place, where a strong twist of melody, suddenly, has just as much power as a well-crafted turn of phrase.

'Allison' is a representative track. What do you know from the title? That the song is about a person, or inspired by a person, or aimed at a person—that in some way, a person probably named 'Allison' contributed to its genesis. The refrain is where the song gathers power. It billows to a climax where layered voices rise and fold into and around one another with the same complexity and comfort as eye contact done right. It could well be interpreted as a romantic overture, or as an ode to platonic trust, or something well between the two.

'Dying All the Time' is another representative track. Where 'Allison' strikes you peacefully, 'Dying All the Time' reminds you that peace is only peaceful because something else is not. The introductory guitar rings in a balls-rock shock, and is followed by a tidal wave synth that puts you squarely at the foot of a behemoth. With Scott Simmons’s foreboding bass line and Jed Bindeman’s furious drums as the engine, the song chugs towards anxious climax and ends with a roar. It’s an entirely different mood than 'Allison', and yet the perfect segue.

Maybe The Original Faces is pop music in denial of one or two key pop conventions. The one it denies most brusquely is the need to have a discernible, ‘relatable’ narrator. By resisting lyrics in very prominent vocal tracks, Helen aims to excite the voice that precedes your speaking voice, the one of pure emotion that tells you how you’re feeling. Also worth mentioning are the demo tracks that lead into/out of many of the songs, which give the album a feeling of history, like seeing the seeds alongside the full-grown tree. It’s a very strong album, one that I found myself wanting to listen to over and over again. Highly recommended.