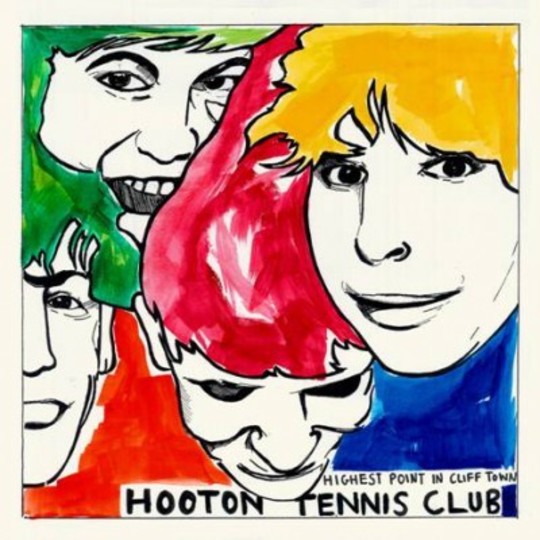 In my head, I have a mental imagine of the four members of Hooton Tennis Club meeting up in a flat in Cheshire early one evening, deciding what they are going to do for the rest of the night. After a long an intense discussion, the four of them have whittled down their choices to two - either they are going to go out for a Nando's (cheeky or otherwise), or they are going to head down to the nearest recording studio for an hour or two, record a few ditties, having not written anything until they arrive there, and see what comes out the other side. After putting the motion to a house, by three votes to one the decision is to go with the latter, and a few months later, they’ve got a debut album to show for it.

Now of course that’s not an exactly honest recounting as to how Hooton Tennis Club’s debut album Highest Point in Cliff Town came into being (especially given that several tracks first appeared on an E.P released back in 2013), but it is definitely the impression that your get whilst listening to the album. It sounds somewhat effortless, in the more literal sense of the word, but in spite of that, the album holds together really well.

The majority of the songs tend to follow the same general format, ie scuzzy guitars, mid to fast paced tempo (with the occasional in-song change thrown in for good measure), lyrics rooted in the mundane and everyday that have the appearance of being concocted on the fly, very much in the Pavement/Yo La Tengo mode, with 'Katherine Sat…' and 'Up in the' Air being among the best songs in this mould.

There are a few songs that diverge a little from this template. 'Spokes' slows things down to a snail’s pace, and subsequently ends up as one of the weaker songs on the record, whilst the gloriously daft 'P.O.W.E.R.F.U.L.P.I.E.R.R.E' sounds and feels like the feckless nephew of Blur’s Charmless Man of twenty years previous. Hooton Tennis Club leave their best to last however, with album closer 'Fall In Luv' a short sharp in-your-face rock tune with mad, enveloping guitar riff. One does get the impression however that the band have purposely self-sabotaged any chance of the song picking up any kind of notice by tacking on a superfluous outro onto the end of it.

Highest Point in Cliff Town is a big, dumb record. It is not an overly complicated album – someone with a basic knowledge of the guitar could sit down and replicate it within a short space of time. It’s lyrically banal, with lines about swimming, making tea and growing your hair out. It does not contain any wide, grand statements about the state of the world, and the band would probably feel embarrassed if you tried to claim otherwise. And existence has the feeling of being somewhat precarious – had they gone into the studio on a different day you imagine that we would have a completely different record on our hands. And you know what? In spite of all this, the album feels so… right. It won’t change the world, but at the very least, Highest Point In Cliff Town offers us a welcome distraction from it for 40 brief minutes.