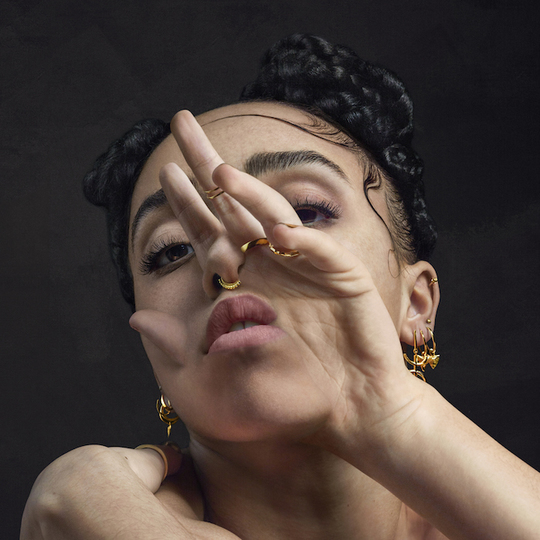 Honestly, why are you reading this? Do you think that some dork like a DiS writer can tell you what to think about FKA Twigs, a siren among mere mortals? I say 'siren', because on FKA’s rocky shores, desire always leads to unseen harm. With both voice and body she invites her audience to look – and while the fixed gaze could break a weaker mind, she turns it round and stabs deeper. For all its decay-drenched flourishes, though, LP1 strayed no further than the hotel room; on this EP, she taunts from the catwalk, before a million prying eyes, and she’s got every one of ‘em on their knees.

Like the debut LP, M3LL155X maps complex psychosexual politics, particularly the tension between gazing men and the women absorbed or ignored by that gaze. And for the first two tracks, the usual spare, stretched-to-breaking dubby haze remains in full effect, as proven on the pattering cavern bump 'Figure 8'. Something’s not quite right, though - demons scratch at the projector screen, lick against the flickering silhouettes: “I’m just jealous cos you’re more alive than I’ve ever been”. This is the genius of FKA, which 'I’m Your Doll' explodes into focus (both the song and the video) – the line between oppressor and the oppressed in lust aren’t always clear. Neither party is innocent. She tells her philandering lover to “dress me up…but love me rough.”

So far, business as normal for the – until “In Time.” BOOM. FKA slips from her porcelain shell and cranks into full Beyoncé attack mode on the refrain – “I be feeling the same, in the club, in the rave” - and while this should sound totally wrong, it doesn’t. Flanked by a regal Eastern mystique and stuttery trap beat, FKA divides her perspective in two – in her usual pristine vocals she preaches for patience like a sage, but in the belted chorus she vents, “you got a god damn nerve”. Form and function crystallize together here, and man does it feel so right.

Mmm. Then shit gets crazy. 'Glass & Patron' still pursues the twisted game of love, with every bit of finesse and restraint that FKA wields so well, but after the chilly geisha intro, the camera beckons and the frenzy ensues. FKA has never sounded this glitzy, this BIG, and dare I say it, this FUN. Still, behind the strobe light strut, we’re shown where the lines of power lie: “I wait all week for / a moment’s break / away from being told who I am”. So that husky whispered refrain that could make even a straight chick swoon (cough cough) – “now hold that pose for me” – also exemplifies the objectifying gaze, subordinating the object to obey. Devious for a pop song, eh.

Given the complete thrill of 'Glass & Patron', 'Mothercreep' whacks the end of the EP off as a careless chef might whack off his finger. The twisting, squirming chorus and FKA’s gorgeous vocals are all very good, but would’ve hit harder early on.

Anyway. No stodgy music writer can prepare ya for the effects this EP will have on yr body – the chills, the aches, the throbs. I thought I’d be prepared, but euphoria has knocked me senseless. I am in FKA’s thrall, and I will not be released.