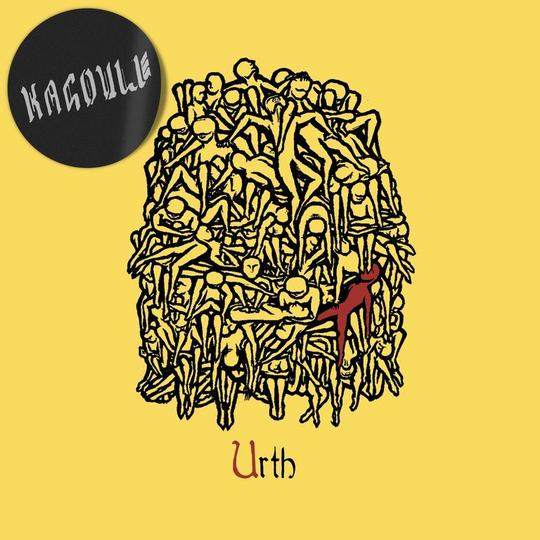 On Nottingham’s east side, beyond its thriving 'creative quarter' and Sneinton’s age-old market, there’s a shabby, brick-built building tucked away in a side street. Formerly a 'Wholesale Fruit and Potato Merchant' (the old sign still sits above the door) it now serves as a pre-eminent DIY music venue – as well as the rehearsal space for one of Nottingham’s golden hopes, Kagoule. The trio’s debut offering Urth comes, fittingly, at the peak of a musical golden age for the city – as a glorious antithesis to Jake 'Straight Outta Clifton' Bugg’s underhanded corporate success, the angriest band in Britain Sleaford Mods threaten the top 10 (quite literally) whilst on the ground, the city’s live music scene is slowly being recognised as one of the country’s purest and most diverse.

Unknown to the national press, though, Nottingham’s underground music culture has been bubbling away for decades. Independent record labels, such as the ever-present Gringo Records (formed in 1996 and containing the likes of Hookworms in its roster) and DIY music communities (such as the self-sufficient local gig promoters Damn You!) have been hugely active under the surface long before the recent peak in the city’s profile. Like Sleaford Mods (who remain dedicated to local abstract punk label Harbinger Sound) Kagoule were born and bred in this culture, and have spent years prowling the live circuit developing an ungodly amount of chemistry.

Despite their tender age (Urth arrives just as the band hit 20) Kagoule’s story starts almost five years ago. Picked up in their early teens by Denizen Recordings, one of the city’s beloved grassroots labels, and now residing on local extreme metal purveyors Earache Records, the intervening years have been spent honing their brand of jagged guitar rock into something entirely distinctive. Despite constant comparisons to Eighties and nineties guitar bands (Pixies and Smashing Pumpkins appear to be the main offenders) you’ll be stuck to find a young band with a stronger sense of style.

Don’t just take my word for it though - 60 seconds into Urth and you’ll know what I mean. As proceedings open with a knotted guitar riff and drum beat stuttering in lockstep, the band’s irresistible friction becomes clear. Bassist Lucy Hatter and drummer Lawrence English form the craftiest of rhythm sections - the sharp math-rock passages of ‘Damp Sand’ twist and turn without breaking a sweat - all whilst frontman Cai Burns finds seemingly infinite ways to contort guitar melodies around them. Sonically, there’s hardly a bell or whilst in sight, and there needn’t be: a band as composed as this don’t need anything gaudy or glitzy. Denizen head honcho Pete Fletcher (with help from Ross Orton of Arctic Monkeys fame) duly leaves the band tons of space to imprint themselves on a clean, punchy recording.

All of this comes together to render Urth a masterclass in controlled chaos – early singles ‘Glue’ and ‘Adjust the Way’ hurtle along like brakeless buses whilst still sounding totally measured, the record’s shortest track ‘Empty Mug’ even proving Kagoule capable of unbridled punk energy. Burns’ unmistakable sneer melds instinctively with Hatter’s yelped backing vocals to turn choruses into ambushes – opener ‘Gush’ includes perhaps the best of the bunch, a hammering right-hook of a chorus that sets the record in motion wonderfully. Hatter even takes a turn on lead vocal for 'Made of Concrete', one of the band’s first ever songs (that was sung for years by Burns) if the extent of their versatility wasn’t already clear.

So, as attention is fixed on Nottingham’s mainstream exports, a band that has grown in stature alongside its raw, unsung underbelly has once again stepped up to the mark. Urth is thus another musical watershed moment for the city – but more importantly, regardless of location, it’s one of the most thrilling and confident debut records of the year.