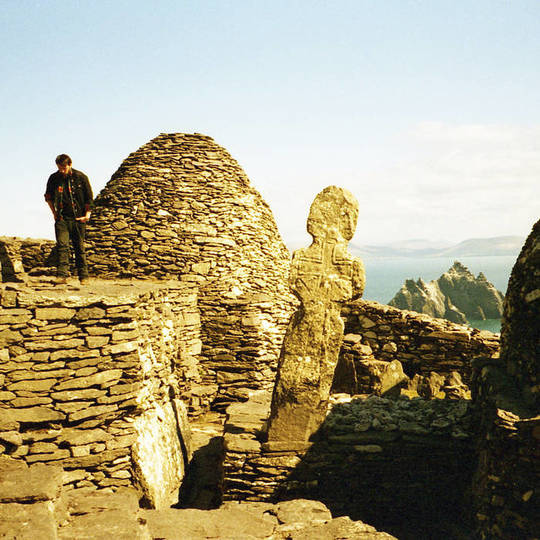 Though thought of with a passing ambivalence by the much of the nation, Cornwall is home to a rich undercurrent of creative life. With such an inspiring landscape and a cultural heritage, how could it not be? Hailing from Falmouth, Red River Dialect's principal songwriter David Morris and his psych-folk entourage have built something of a cult following, with Tender Gold & Gentle Blue marking the culmination of a hugely successful Pledge Music fund raiser.

While technically their third album, this is the second time Red River Dialect have recorded as a five piece, with the band originally forming as an acoustic duo. Following on from awellupontheway's' rousing folk jams, Morris has taken the band in an altogether more personal and mournful direction. Inspired largely by the tragic loss of a parent, it's evident in nearly every aspect of these beautifully introspective songs that this is as much an emotional investment for him as it is for the listener.

Opening with a gentle acoustic guitar and piano ballad, Morris elegantly picks at strings while singing warmly of a “A cool night wind in warm July/ A dream it drew/ A friend shone through” before offering an affectionate dedication to his family “He's now the gold in Blisland's stream of blue / My mother and my sister/ this song is love for you”. While his poetic lyricism is a strong factor in Red River's appeal, there is no denying the outstanding musicality on offer here. With violin, cello, banjo, piano and guitar taking the forefront, the band even tastefully throw in experimental uses of the metalophone and chanter. If all this sounds little too Mumford for you, fear not – this band couldn't be any further away from that world if they tried.

'Fallen Tree' is a swell of musical elegance beautifully carried by Robin Strattons' gentle pianism and a stunning hook built around a choral blend of strings, keys and vocals: “Night swims through bonfires/ Hearts break through desires/ A hiding soul is a dream of finding/ A free word sings of the book unbinding”. While it may sound a little contrived to say so, there is a real sense of place in this record - and that place is 'home' or rather - Cornwall. Speaking of their previous work, M.C. Taylor (of Hiss Golden Messenger) commented on their music having 'come to signify everything wild and shambolic and heart-renderingly, unfairly beautiful that I understand about that coast' - a feeling which has most certainly made the transition into these songs.

A particular highlight comes approximately halfway through the record wherein typical songwriting is abandoned in favour of 'Ring of Kerry'; a near 10 minute centrepiece built around an ethereal drone of chilling sound. Echoes of distant vocals chime in and out as a gentle percussion compliments the self proclaimed “submerged chant”. Around the six-minute-mark the speakers are filled with the sound of nearby rainfall, creating a sense of comforting, yet hypnotic isolation as echoes of Morris' distant chant continues.

While their previous record soared with a rock infused energy (earning plentiful comparisons to The Waterboys in the process), this album offers a more personal perspective of a band growing up. There was always a knowing sense of self in Morris' lyrics; a man who may not always seem at ease with his emotions but ultimately understands why he feels them. This is a beautifully composed album and one which frequently feels like a blessing that we even get to hear it at all. Nobody has to share their feelings like this but we're damn lucky that a select few do, and we should most certainly appreciate that.