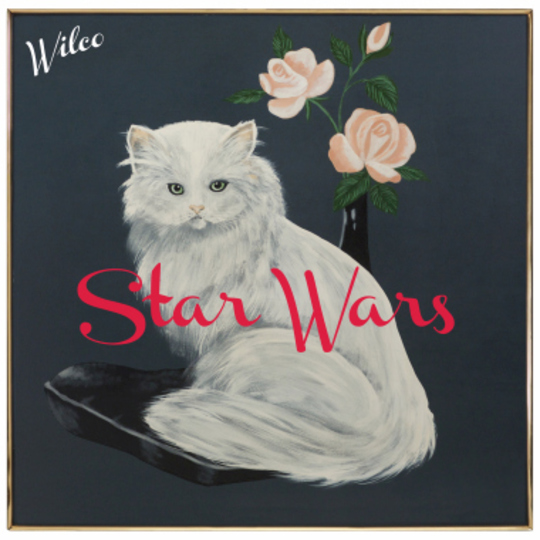 When it came to what we should expect, it’s probably safe to say that most of us were confident we knew. Last set The Whole Love was a cracking album and their most eclectic, but didn’t stray too far from the soft, alt-country path trodden by Sky Blue Sky and Wilco (The Album) before it. Tweedy’s Sukierae was the same: a good album, enjoyable to listen to, but not as weird and wonderful as Wilco at their best. Personally, I thought Sukierae would have given us at least a clue as to the direction the band’s notoriously dominant frontman was going to take us in.

Star Wars is an apposite name for the band’s ninth album, the most space-aged and weird since A Ghost is Born 11 (!) years ago. It’s probably safe to say that most of us fans fell for Wilco on account of how perfectly their songs can straddle the line between accessible, enjoyable pop and experimental noise that makes the listener work. Like The Wire or Test cricket, you have to work for Wilco, but the return on your investment is the most wonderful thing. The morning of the album’s release I texted a friend to tell him the exciting news; two hours later he replied: 'They’re not supposed to be making stuff this good at this stage of their careers.' Weirdly, late-career weirdness is the closest thing Wilco can do to a fan-pleaser.

Opener ‘EKG’ is a short, instrumental Beffhearty jam that quickly moves into an exciting Kraturock rhythm. Wilco did this on The Whole Love, opening with the brilliantly left field ‘Art of Almost’ but didn’t really follow through; this time though, they go all out. ‘More’ is squalling keyboards, fucked-up acoustic guitar sharp stabs of strangeness from Nels Cline’s magic guitar. ‘Random Name Generator’ – one of the album’s highlights – is a hook-filled glam rock stomp and possibly the first Wilco song you can dance to. ‘The Joke Explained’ is fuzzy stoner rock that sounds like Tweedy telling Mac Demarco 'this is how you do it, kid'. Then there’s ‘You Satellite’, which is perfect: destined to be regarded as one of their best ever songs, it descends subtly into a bruise-coloured maelstrom of guitars, echoing My Bloody Valentine or The Jesus and Mary Chain.

OK the second half of the album isn’t quite as good – it’s an 8/10 whereas the first five songs get a solid 10. ‘Taste the Ceiling’ and ‘Where do I Begin’ are as close as Star Wars gets to the mid-tempo, straightforward stuff of the Sky Blue Sky era, but this time around the understated little guitar and keyboard flourishes feel like part of an interesting song rather than masks for shortcomings. Besides, you’ve still got the brilliant punkish, punchy ‘Pickled Ginger’ (the song Tweedy performed in character as part of fictional band Land Ho in Parks and Recreation last year) and the dreamy closer ‘Magnetized’, which is a beautiful showcase for Mike Jorgensen and Pat Sansone’s keyboards.

You might surmise from the above that Star Wars is a bit of a hodgepodge of styles, but that couldn’t be further from the truth. Everything sounds fresh, new and different, but every song is still recognisably Wilco; it just sounds like Wilco at their best. They’re my favourite band and this is an always-welcome reminder that my favourite band is better than your favourite band.