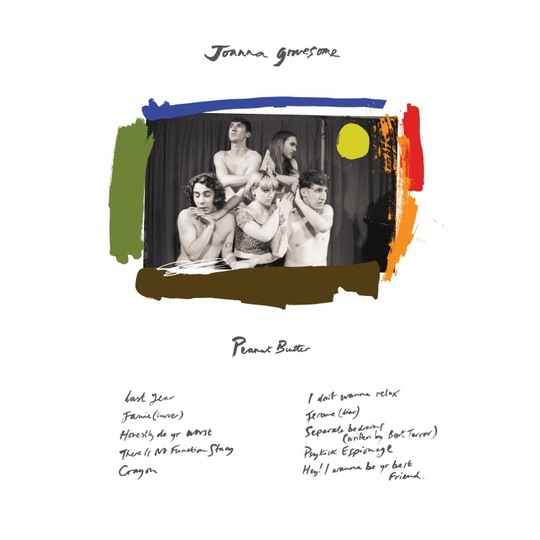 As explosive and as immediate as Joanna Gruesome’s music is, their imprint on public consciousness has been somewhat gradual. If 2013 debut Weird Sister finally marked the point where more people were talking about their songs than their name, it still didn’t quite seem to awaken the public at large to the power of their music. Slowly but surely, though, they’ve started to seep into wider cognizance, probably aided by the fire and eloquence with which the band and their singer Alanna McArdle have railed against the sexism and miscellaneous bullshit which pervades the music industry and world in general.

It’s a record which grabs you by the collar from the opening seconds and angrily demands that you fucking well listen to what it has to say. First song ‘Last Year’ tears into life, bristling with fury but is also offset by a deliciously breathless sense of melody which might explain why people have (wrongly) described this band as twee in the past. Frankly, though, how anyone can use such a dismissive and distasteful word to describe a band whose songs are laced with threats to crush skulls and bitter refusals to comply like ‘Last Year’ is beyond me.

It’s a similar story on the likes of ‘Honestly Do Yr Worst’ and ‘Psykick Espionage’, the latter of which was first previewed on a split EP with kindred spirits Perfect Pussy last year. These are incandescent songs, prodigiously urgent in their delivery, but they’re also insanely catchy pieces of pop music. One minute McArdle is spitting her words out as though they’re her last, the next she and guitarist Owen Williams are harmonising in the most disarmingly sweet manner, a dichotomy which adds much to the moreishness of Joanna Gruesome’s music.

The fact that the aforementioned ‘Last Year’ is the second longest song here at two minutes and 52 seconds says a lot about Peanut Butter as an album, with half of its ten songs over inside two minutes. There’s not a millisecond wasted, not the slightest sliver of fat in evidence. The ferocity with which Joanna Gruesome set about their task makes it seem like they’ve only been given half an hour to get this whole thing in the can, and as though they don’t care how much blood and sweat it costs them to accomplish it.

Crucially, though, while it may be delivered at breakneck speed, Peanut Butter never feels like it’s been dashed off in a hurry, nor does it feel like its 22 minute running time short-changes us. Like Weird Sister and a sizeable portion of the best albums of the last few years, Hookworms’ MJ has again been at the helm. Without actually being in the studio, it’s difficult to speculate on the nature of his midas touch, but Peanut Butter might well be the best album he’s been associated with yet. Whether he’s some kind of Spectorian megalomaniac, or a quiet presence lurking in the background giving the band carte blanche to express themselves, or something in the middle, he’s constantly capturing the natural energy of the bands he records, with his fingerprints apparent purely by dint of their absence.

With Peanut Butter, Joanna Gruesome have raised the bar. If you’re the sort of person who gets irked by those constant and tiresome ‘GUITAR MUSIC IS DEAD’ stinkpieces polluting your social media feeds, then I’d suggest that you should just link up the culprits with this record. Its vitality is infectious, and for me it emphatically confirms what Weird Sister gave us reason to suspect: if print magazines put more bands like Joanna Gruesome on their covers, then a lot more of them would probably still be in print.![Please enter...][99675]