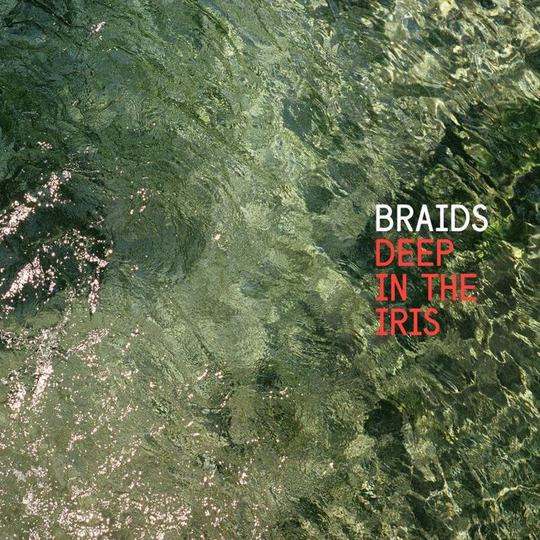 On their 2013 album Flourish // Perish, Braids created a record of such striking originality, I had my doubts as to whether they'd ever better it. The bar raised suitably high, the Canadian trio re-emerge two years later and bring nine new songs with them. So, have they managed to better their previous album? In a word, yes. Yes they have.

On a first listen, Deep in the Iris feels a lot more human than Flourish // Perish's monochrome, electronica-heavy starkness. Although there's still a heavy use of electronics on here, it sounds like they've learned how to make them sit more effectively with their brand of gentle guitar plucks, subtle piano and manic percussion. The clanking electro drum loop that clatters over the opening track 'Letting Go' being as good an example of this new found harmony as any. Across these 40 minutes or so, you realise that they've totally nailed the 'half electronic/ half band' sound they've been going for since their debut, basically.

It's hard to find a highlight to the record, because honestly, the whole thing is. There's an utterly remarkable maturity in the execution of their sporadic ideas here, especially for a band so young and one only on album number three. They employ a pretty hefty sonic arsenal too, but crucially know when to sit back and when to push forward - nothing feels like an afterthought, or a cluttered experiment in music tech - it's frenetic stuff, but they know how to steer each song.

The lynchpin to all this is undoubtedly Raphaelle Standell-Preston's incredible voice. Not to take away anything from either Austin Tuffs and Taylor Smith, but my god her voice is just something else. It switches from an intimate whisper to a soaring, skyscraping almost-scream at the drop of a hat, and it's this dexterity that really sets these songs alive. The outro to 'Blondie', for example, sees her screeching to the heavens before abruptly halting and heading into the beautifully breathy 'Happy When'.

The songs themselves are an odd mix of otherworldly pop and experimental art-house indie, and contain the kind of stealth melodicism that you really wouldn't expect to find in music like this - all juddering rhythms, melancholic piano and whirring synths. Standell-Preston's voice manages to twist and turn over the lush backdrops and create these gorgeous, off kilter melodies out of nowhere - before you know it, you're deep into a chorus, and you've no idea how you got there.

The centrepiece to the whole thing is undoubtedly the incredible 'Miniskirt'. A plaintive vocal eventually unravels with the gradually unfurling synth line into a vitriolic, snarling missive aimed squarely at the kind of neanderthal misogynists she's undoubtedly had to deal with in the past. "I'm not a man hater, I enjoy them like cake" she humorously coos at the start, before unleashing "but in my position, I'm the slut, I'm the bitch, I'm the whore, the one you hate… It's like I'm wearing red and if I am, you feel you've the right to touch me, because I asked for it", sung with such passion and control, it's hard to find fault with such bravery in committing this to tape. Those unmistakably Braids-like choppy, almost drum'n'bass rhythms and zipping, bass heavy synths take over the second half of the track in what is a definite career highlight, let alone simply an LP highlight.

Elsewhere on the record, the hits literally just keep coming - 'Getting Tired's jazzy snare rolls and splashes of hi-hat, the almost-pop stomp of 'Sore Eyes' and with the strangely euphoric closing duo of 'Bunny Rose' and 'Warm Like Summer', Braids leave you with the feeling that they've created something very special here - something much more than just another album, it feels like they've crafted a perfectly human body of work.

It's fuelled by such wildly contrasting emotions, it's a wonder they managed to channel this into something so beguiling and exciting at all - in lesser hands, it would simply be an unfocused scrappy mess, but Braids have taken all this and managed to create one of the finest records of the year so far.