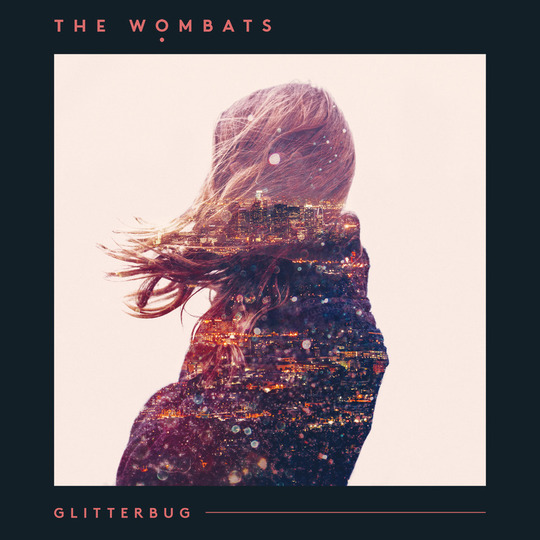 Don't judge a book by its cover. Don't judge a song called 'Emoticons' by its title. Judge it by the fact that it's a sugar-drowned sped-up Kodaline track. Judge it by the discount Passion Pit sound. Judge it by loud lyrics such as "And all these emoticons and words, try to make it better but they only make it worse" and "Well now all my elephants are in the room". Judge it by the violent amount of production gloss afforded, setting a template for a record where instruments register like cheap CGI.

I first saw The Wombats at a festival. It was a bit of fun. Dancing occurred. The whole thing felt very of its time, fleeting and feather-light. Listening to Glitterbug, you can't help but feel that they're still up there on that stage in 2008, going through their thinking man's Pigeon Detectives motions, only stopping to crane their neck in the direction of what music might be catching on with the general populace. How else do you explain the strange marriage of stagnant musings and shameless mimicry that is their third record?

While Passion Pit is the most commonly employed emulator - the shimmery atmosphere of 'Emoticons' is one thing but Michael Angelakos could be forgiven for doing a double take were he to hear the processed lilting cries peppered about the laborious 'Greek Tragedy' or getting his lawyer on the phone as 'Curveballs' closes things out - the Liverpool trio find the time to 'pay homage' to MGMT, Foster the People and a general Hype Machine-friendly cadence.

Lyrically, it's a listless affair as Matthew 'Murph' Murphy leans head-first into teen angst like he's penning a Skins revival for an even more doe-eyed audience. It's no exaggeration to state that every song here has a minimum of one instance where the words spill so gracelessly it's as if they were drunkenly hurled down a flight of stairs. Some notable examples:

"Kiss me with your fist, it's alright/Wrap your hands around my throat, I won't bite" - 'Be Your Shadow'

"I don't wanna be the blinking rabbit to your wildebeest, the jaded lover to a sex machine" - 'Pink Lemonade'

In all of this, it's not that any one song is outright horrific (okay, 'Pink Lemonade' is pretty unbearable), more that the entire experience is a chore. Murphy's vocals, which often skirt the line of outright whining, make for a particular detriment, but it's the sense of disconnection that permeates Glitterbug that rankles the most. Granted, as a 30-year-old male I'm clearly not their target demographic but it's hard to imagine even The Wombats themselves feeling especially passionate about anything on display here. Who knows, maybe they're happy to soldier on for years to come as a Scouting For Girls for the university set.

"I've been here before", Murphy curtly notes as his band's latest work prepares to bow out in searching yet forgettable fashion. We all have buddy, but you have to move on eventually.