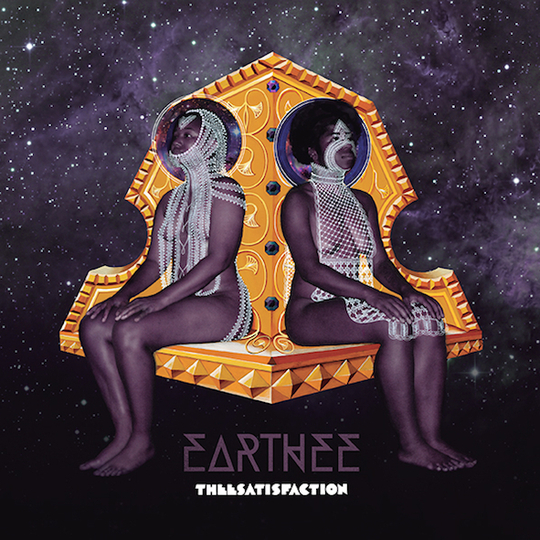 It has always struck me as odd that there aren’t more albums about climate change. Arguably being the most crucial social justice issue of our age, you’d think it’d be enough to galvanise sections of the punk community, for instance. Yet it remains strangely absent. It’s a breath of fresh air, then, to see it emerge from the hip-hop scene thanks to THEESatisfaction’s second album EarthEE – at once a lamentation of what we’ve lost, and a hopeful reflection on the capacity for change.

Titles like ‘No GMO’ and ‘Planet For Sale’ make the central themes seem pretty obvious, and indeed on first pass, the album’s lyricism sounds a similar sort of naturalistic and earthly focussed environmentalism that Joni Mitchell sang about when she asked farmers to put away that DDT. But this is a bit of a simplistic analysis. Really, this is an album about interconnectivity.

The album’s opening line encapsulates its ethos: “said the bird to the water, may I take a sip? May I dip my toes in it?” This is a meditation on respect, mutual dependency and only taking as much as you need. It’s an opposition to power abuse and avarice. And it has a knowledge that all actions are part of a much wider tapestry, with far reaching consequences. “You believe when you blink you think that it isn’t seen / but no act goes without recognition”, goes album highlight ‘Recognition’. You can hear it as an empowering reminder, or a timely warning. More to the point, you can hear it as an up-to-date reflection on our current sustainability problems.

The result is an album which – in its laid back approach – ebbs from the external landscape to the inner life to the wider universe and back again, dissolving the barriers between them all. It reflects on a holistic approach to thinking about the Earth, recognising that culture is just as important as chemicals.

But don’t let me overstate their success on this front. It collapses in execution from time to time. ‘Planet for Sale’ contains these actual lines: “we didn’t plant things / and when you ask me I’m-a tell you it’s a bad thing / when we used to give a fuck it was a rad thing”. (If you need to verify for yourself that this actually happens, it’s at 1.25 specifically). And although there’s no bigger stinker than that, it’s fair to say that they’re better at the bigger conceptual picture than the details.

Further problems creep in with the music itself. Their debut was already loose enough, but EarthEE slackens to a level of shapelessness, and is gloomier with it to boot. The overall vibe is pleasantly hypnotic, with clicks and brushes gesturing towards beats rather than actually carving out grooves, and spacey, staccato synth lines building a matted tension. But the thing lacks form, and cries out for more moments of rhythmic and structural focus like ‘Recognition’. Guest verses inject bursts of momentum, but soon drift back to one-note stabs and nervous staccato which – over sketch-book two-minute-running times – build to an unsatisfying whole.

Its scope is admirable and wise, bridging from soil to space through a combination of their lyrics and music. It also taps into the same sweet spot of their debut, managing to balance human exceptionalism with human humility. Applied to themes of environmentalism, this resonates even more strongly here. But beyond all of this – their debut was also frequently fun, groovy and sexy. EarthEE never is. And considering it’s a celebration and admiration for Earth and the life it supports, this is both surprising, and a shame.