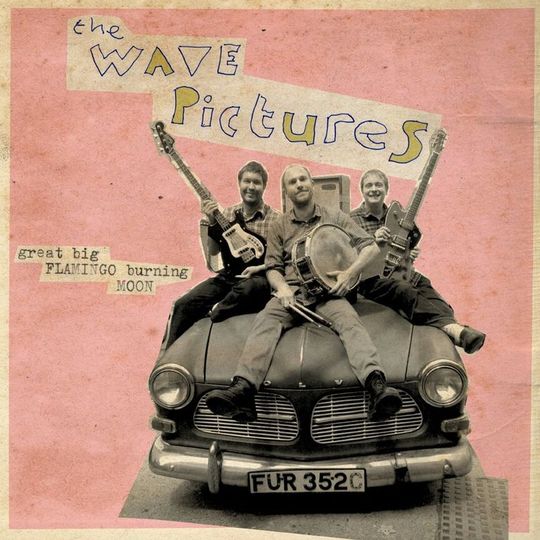 Reliable indie institution The Wave Pictures return with what must be their two-thousandth album, having made more-or-less one a year since early in the last millennium. In 2013 they gave us their double-CD opus City Forgiveness, which was brilliant if a little bit over-stretched. Last year saw them cover Daniel Johnston’s Artistic Vice in its entirety, note for note, because why the hell not? Back in the fourth century they made a garage-rock concept album about bronze foundries.

Alright, I made some of that up, although all three options sound equally unlikely. The truth is The Wave Pictures are an astonishingly prolific act who have very much mastered their Sixties-flavoured-garage-pop niche. This weeks’ Great Big Flamingo Burning Moon is roughly their fourteenth album in less than ten years - it’s a workload worthy of The Fall, except produced by a solid and sane trio of firm friends. The question really is 'what do they do next?' The answer, as Great Big Flamingo Burning Moon shows, is to be the Wave Pictures just as hard as they can be.

Co-written and produced by lo-fi legend Billy Childish, this is the most Wave-Picturesy the Wave Pictures have yet been – a distillation of their retro essence and treasured indie aesthetic. It has all their hallmarks in place – the waspish, witty narrative lyrics, the no-flash-all-feeling virtuoso guitar solos, the jingle jangle, and the rockist crunch. Present and correct. What Childish has helped them do is inhabit those tropes better than they ever have.

It’s a messy record, in the best possible way: organic and live sounding, with few overdubs and little complication, tipping its hat constantly to its retro inspirationg: The Troggs (‘The Telephone’,) the Stones (‘Green River’), early Beatles (‘Katie’) and hints of Beefheart and Arthur Brown (‘Sinister Purpose’, the title track.) Lyrically frontman Dave Tattersall – possibly assisted by Childish, though we’re not told specifically – has a likeable knack for sitting the absurd and the domestic in the same basket. ‘Frogs Sing Loudly’ manages both "Please put the heating before you go to work" and "you can hold them in your hand that's why they call them ‘palm trees’" while ‘Katie’ has “The lepers roll and wrestle on the tiny television". In places this could be a concept record about hangovers ("Paracetamol, pineapple juice and that first cigarette" gasps ‘The Blue Tent’.)

Musically we move from the sprightly garage of the opening title track, to the ‘The Telephone’s poppy stomp, from the swampy, Stonesy harmonica-spiked blues of ‘Green River’ to the mellow, tape-hiss-and-tremelo of ‘At Dusk’ and ‘Sinister Purpose’s gonzoid psychedelia. It’s all done with warmth and with a great deal of charm, something which has always marked Tattersall and co’s output. What Childish has given them is an outsider's perspective – he’s seen what’s great about them and he buffs it down to to its concentrated pop essence which should see them through another 30 or 40 releases before the end of the decade.