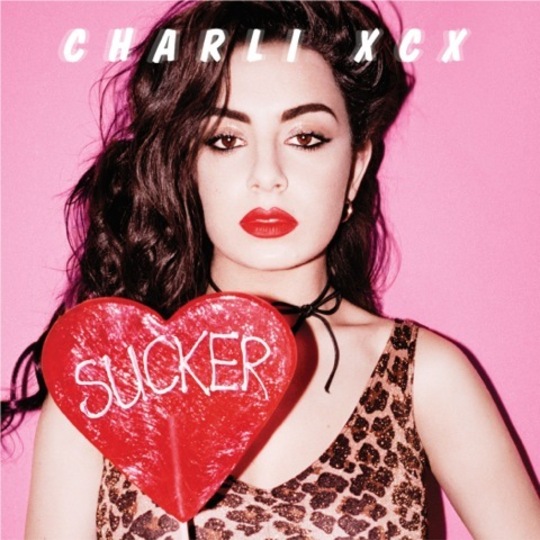 First up, forget what you’ve read: Taylor Swift didn’t make the best pop album of 2014 – Charli XCX did. Unfortunately, instead of sharing it in October – as originally planned – the US arm of Atlantic Records released it in the 'compilations and reissues only' graveyard of mid-December, thereby missing all the end of year round-ups. Meanwhile, the UK division went one better and sat on it for a further two months; by which point, you’d imagine that most of Charli’s more militant British fans would simply have 'acquired' the US version instead. To add insult to injury, the pirates got a better deal too, because the US version doesn’t feature Rita Ora.

For any of Charli’s angels patient enough to wait, Sucker’s going to sound mightily familiar. Six of the 13 songs here have already been drip-fed to the public, either as singles or 'instant grats', lending a strangely greatest hits feel to what is, technically, a brand new album. Stranger still, the previously unreleased tracks are as strong as the singles. No mean feat when you consider she’s already gifted Icona Pop ‘I Love It’, donated the best chorus of 2014 to Iggy Azalea, and tossed the irresistible sugar-rush of ‘Superlove’ away as a standalone single. In short, we’re dealing with a prodigiously talented songwriter.

It wasn’t always this way. Despite glimmers of brilliance, Charli’s 2012 debut was ultimately hampered by murky production and too much lumpen filler. Though Sucker features the same number of tracks, its impressive consistency and crisp delivery makes it feel brief in comparison. Indeed, she calls time on that chapter of her career right at the beginning of the record, abruptly interrupting some hazy, True Romance-style synths with the sound of a life-support machine flat-lining. From hereon in, she’s ruthlessly direct with her writing: songs rarely hang around for longer than three minutes, and often you’ll hear the main vocal hook introduced in the opening bars, so that when the chorus eventually drops for real you’re already subconsciously singing along.

The biggest development here is Charli’s shift towards guitars, likely inspired by the punk record she reportedly wrote and shelved prior to starting Sucker. There’s the brilliantly bratty, Bow Wow Wow-ish ‘Breaking Up’, the frenetic pogo of ‘London Queen’, and the low-slung swagger of Rivers Cuomo-collaboration ‘Hanging Around’. Best of the bunch is ‘Body Of My Own’. Essentially a celebration of female masturbation, the chorus’ Eastern-inspired chord progression posits it as a 21st century take on ‘Turning Japanese’. It’s clearly tongue-in-cheek (check out the frenzied panting in the middle eight), but the, “I can do it better when I’m on my own” refrain remains an empowering message.

Ideas of independence and rebellion run deep on the record, tied to themes of hedonism, friendship and love. On ‘Famous’ she’s swiping cars and crashing parties with friends, on ‘Die Tonight’ she’s running riot around a hotel, and during ‘Gold Coins’ she imagines herself nonchalantly smoking inside a fortress built from dollar bills. The whole record is a riot of colour; a vivid fantasy world, filled with “purple glitter” and “pink champagne”, set beneath “neon lights” and beside an “ultraviolet ocean”.

The more bubblegum Charli’s songwriting gets, the better. Sidled up next to breakout single ‘Boom Clap’, ‘Doing It’ is one of the purest “pop” moments on the record, driven by sherbet-sweet synths and a soaring, Noneties R&B chorus. On the US version, the titular “it” is left deliberately ambiguous, but the presence of Rita Ora for the UK release aligns “it” to partying, rather than fucking. The label’s last-minute decision to include Ora is mystifying: her vocal delivery is less compelling than Charli’s, her presence dilutes some of the song’s glorious innuendo and, she just all-round impinges on the quality of, what was, a clear stand-out track. We can only assume she was hired to lend the album some commercial clout; a move that wasn’t deemed necessary in the US, due to the prior successes of ‘Boom Clap’ and 'Fancy’.

Alongside the aforementioned bumbled release strategy, it’s another unwelcome interference on an album that deserves to be ranked amongst 2015’s best. More than that; it’s an insult to an artist who’s proven – with quite brutal efficiency – that she knows her way around a killer hook. As Charli herself told the NME, at the start of 2014, 'I can write a fucking hit song. And I'm going to write some for me now.' There are 13 of them here; take your pick, suckers.