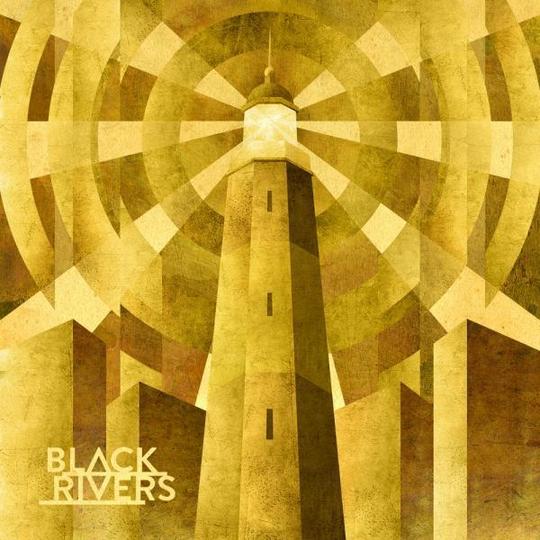 Sometimes albums surprise you. It can happen when an album is hyped beyond belief and then underwhelms, or worse. Sometimes it can happen the other way too, when a debut record from a relatively unknown band comes along and hits you squarely between the eyes. Thankfully, my experience with the first record from Black Rivers veers closer to the latter than the former.

In fact, to call Black Rivers an unknown band is somewhat disingenuous. Following the recent debut solo album from Jimi Goodwin, the remaining two members of erstwhile Mancunian indie titans Doves, Jez and Andy Williams, here weigh in with a debut record which belies the infancy of the project to show gravitas, confidence, and outrageously ambitious songwriting nous. Entirely performed and produced by the brothers, and mixed by Claudius Mitterforfer, Black Rivers sounds like the product of a band giving themselves and their ideas free rein in a studio but crucially having the chops and the chutzpah to carry it off. This, and I hope this is taken in the complimentary sense in which it is meant, sounds like the best possible album one might imagine emerging as the new project of members of a band like Doves.

The album really has everything. ‘Diamond Days’ sounds like a summery single, all jingle-jangle and spidery guitar lines. Previous single ‘The Ship’, conversely, immediately gives notice that there is more to Black Rivers than meets the eye, as it unfurls a smoldering combination of layered synth work and crunching guitars. Already it is clear: this is not your average indie album. Current single ‘The Forest’ is next, offering a swinging, soulful update to the best song Richard Ashcroft never wrote. Melodically and harmonically, the twists and turns of this song are so pleasing, so just right that it is hard to describe. Sure, Black Rivers won’t change the world, but within three songs of the beginning of their debut album, you find yourself wishing that you lived in such a time as that songs like this could, indeed, inspire a world-changing hope. Debut single ‘Voyager 1’ is another highlight as synths and guitars layer upon one another with such intricacy, such precision. The verse, particularly, feels like it could have been lifted from In Rainbows. Of course that could be because it really sounds like ‘Weird Fishes/Arpeggi’, but this doesn’t stop this song being a towering centerpiece of the album.

‘The Wind That Shakes the Barley’ is another twist on this album of stylistic diversity. As it begins, School of Seven Bells come quickly to mind as an atmosphere is built. And built. And built. The groove, when it arrives, is deeply satisfying. It is followed by the aggressive 'Age of Innocence', whose chorus is a punch to the stomach, the kind of hook that, once heard, will never leave your brain.'Coral Sea' returns us to soulfully-swung, Radiohead-esque atmosphere, before 'Deep Rivers Run Quiet' does exactly what it says on the tin, as restrained processed piano and off-kilter guitars all too soon closes the album on a beautiful note.

Upcoming tour dates with Elbow and Noel Gallagher and his High-Flying Birds make it possible that Black Rivers have every opportunity of becoming ubiquitous this year. Armed with such clever and anthemic songs, they should have every chance of cementing their status as festival favourites as summer rolls around and leaving their parent band a distant memory. This is a fine debut album.