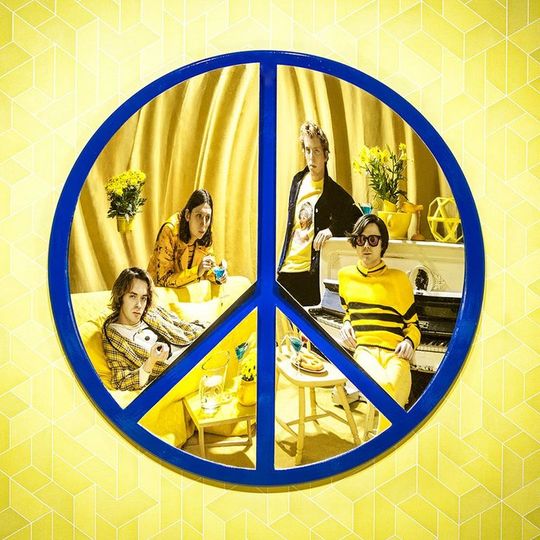 Amid the wreckage of the failed Gritpop revolution, one band stood out. While it was easy enough to dismiss the knuckle-dragging pub rock drudgery of Viva Brother or snigger at Palma Violets’ comical attempts at chronicling teenage romanticism and misadventure, Peace seemed to gather a loyal pack of cheerleaders purely by being the least bad option. Sure, they borrowed more from the Madchester baggy scene than Britpop’s supposed heyday, but the effect was the same – four scruffy, shaggy-haired white guys anointed as guitar music’s latest saviors, three chords and some cocky patter apparently all that’s required to be 'the future of indie'.

Predictably, such proclamations drew some stinging rebukes, and for a while Peace were the touch paper for a wider debate about retromania and the very nature and purpose of music criticism itself, an updated version of 'The Kidz' vs. old-men-yelling-at-clouds for the Twitter generation. But what was so remarkable about the bitterness of the sniping and prolonged navel gazing was the fact that the record at the eye of the storm, In Love, was such a bland, insipid washout. Thirty-eight-minutes of the worst type of bingo-indie, it was music bled dry of wit, charm, or anything resembling personality, a remarkable feat when you consider who they were stealing from. Early Blur, house piano, some MBV-aping squall, a distant echo of grunge, obviously the Roses and the Mondays and the Carpets; rarely have so many interesting shades been swirled into such a dreary, grey morass.

You’d think then that Peace would come out swinging for album number two. That granted a stay of execution they’d gone off and worked harder – worked smarter – at re-assembling their heritage jigsaw into something more distinct, something they could at least call their own. It’s not easy to find your voice – not when there are covers to grace and interviews to sulk through – but what can’t be forgiven is a lack of effort. And here Peace still sound like they’re happily floating around in some mid-Noughties bubble, a time when stupid haircuts and a laddish wit guaranteed NME patronage and several nights at the Scala.

Happy People is a record that basks in its own mediocrity, and scans like it was written by people who are anything but. Engage with it and you hear a band rummaging around the bargain bin of landfill indie, desperately trying to locate something – anything – to hang a song on, and failing miserably. 'I feel the last few years of "band" music has been style over substance,' frontman Harry Koisser recently told the Guardian which, given his output, I can only assume was some kind of joke; chutzpah has long been a central element of rock’n’roll myth-making, but only when you have the chops to back it up.

Instead, Koisser is happy to imitate, not emulate, and he fails to convince even when using someone else’s brush. For one thing, the raw materials are more blatantly abused this time around; opener ‘O You’ leans on early Primal Scream and carries hints of calypso in its descending riffs; the chassis of ‘Lost On Me’ is heavily indebted to Stereo MC’s ‘Connected’; ‘Under The Moon’ – and do note the bad, sixth-form poetry conjured by these song titles – attempts to replicate the Fifties romanticism and cool Californian croon that Alex Turner has adopted so wholeheartedly. Elsewhere, the album only really demands attention when it attempts to shift gears – the stop-start schizophrenic squall of ‘I’m A Girl’ that recalls King Adora’s ‘Friday Night Explodes’ at least makes sure you’re still awake – although their Wonderwall moment, ‘Someday’s acoustic plod, is a melodramatic mush that lacks sparkle and heart.

Saving the worst till last, the strange, semi-rap delivery and ice-cold funk-lite of ‘World Pleasure’ is six minutes and 24 seconds I wish I hadn’t wasted, and I’d urge you not to make the same mistake. It also contains one of Happy People’s worst lines – “Everyone’s their father’s son / Feral youth and lazer guns / Please don’t send me off to war” – which, considering some of the cod philosophy on offer, is quite a feat. Peace’s lyrical fumbling is not just gauche, but wilfully bad, like Alan Partridge refashioned as a street poet for frustrated millennials.

“Hypnotiser / Not another six string sympathizer”; “The man on the news he said ‘Try not to be scared / Blood, Love and Terror. Next the weather’”; “Welcome to a world / Where bitcoins pay for beatings and diamonds pay for girls”; “Money / Do you eat it when you’re hungry? / Does it taste good?”; their crimes against words are numerous. Scattering awkward rhymes and clumsy couplets only works if employed with a knowing wink and some healthy self-deprecation, but Koissers inability to generate any friction whatsoever allows his earnest pleadings to drift apart, a man who’s found a thousand different ways of saying nothing at all.

Happy People should be the final nail in the coffin of the idea that quirky, photogenic outsiders who surround themselves with easily impressed teenage fans can automatically be moulded into something worthwhile. The ten tracks here convey no pleasure, and lack any form of belief in their own urgency or desire to be adored. There was a time when music like this was a wet dream for MTV2, destined to be drooled over by Zane and the majors’ gurning A&R acolytes, but that time has long since passed. And nor should it be mourned; for if bands like Peace can’t even feign interest in being better than this, why should anyone else care?