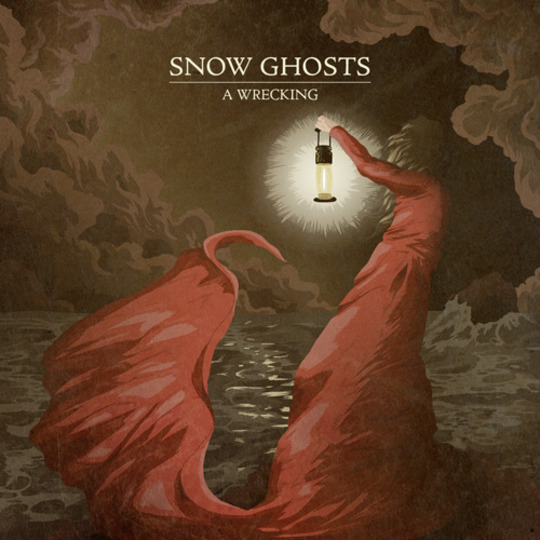 Snow Ghosts don't waste any time, it seems. It's barely been 18 months since the release of their debut album, A Small Murmuration, and since then, vocalist Hannah Cartwright (Augustus Ghost) has started working with another band, Masakichi; producer Ross Tones (Throwing Snow) has released his own debut album, last year's Mosaic; and they've added EXES man Oliver Knowles to their line-up. With all that going on, you'd wonder how they found the time to record the second Snow Ghosts LP, but they pulled it off somehow, and the resulting album is a much darker listen than its predecessor: a strange and unsettling record on which electronica is assimilated into the worlds of ambient and folk music, and the trio make use of an expanded musical palette. Their debut album focused on rhythm and texture, but hinted that there could be more to their sound than we had previously thought; by contrast, A Wrecking is a fully realised work - never explicitly stated to be a concept album, it nonetheless incorporates recurring motifs, themes and styles to create a unified whole.

With a litany of nautical references to be found in its track list alone - 'Bowline'; 'Drought'; 'Angry Seas' - one could be forgiven for expecting an album of sea shanties, but what we're given instead is a haunting and complex record that benefits from being listened to in solitude and on headphones. The trio weave a rich tapestry of sound, and A Wrecking makes up for its lack of overall accessibility by being full of intricacies that may be missed on initial listens but reveal themselves upon further investigation. The buzzsaw guitars that open 'Held the Light' may come as a shock, but they are eventually overtaken by plaintive minor-key piano and Cartwright's evocative vocals, both of which set the mood of the album as a whole. There are noisier moments on the record, with 'The Wreck' opting for nerve-shredding tension and waves of droning fuzz that seem to be everywhere at once, but in general A Wrecking is a much more contemplative affair than we've heard from Snow Ghosts thus far. There's a rather Björk-ish feel to the subtly menacing 'Take a Life', whose funeral-march tempo and twisted pop sensibilities help it to make an impact that's slightly more immediate than that of its cohorts, but the first half of the record is more focused on the slow reveal than anything else.

Suddenly, the gears shift, and the record emerges from 'The Wreck's' noise-laden doomscape with a changed musical perspective, as a four-to-the-floor beat and the album's first notable hook make their presence felt. 'The Fleet' comes as a surprise, standing out as the one moment on A Wrecking during which Snow Ghosts go for the jugular, but it's not as though it's the album's clear outlier. It's a different spin on the beauty and intimacy displayed on the likes of 'Circles Out of Salt', and also features an electric violin solo (if you needed further convincing), with the instrument put to much more unconventional use than elsewhere. There are further thrills to be had on 'Bowline', which can't decide whether it wants to be a harp-led ballad or a synth-driven pop song, so combines both in a manner that is both baffling and brilliant. Those two tracks provide the stormier moments on an album that's much more comfortable being delicate and insular, and deserve repeated listens even if A Wrecking itself cannot sustain your interest. However, if you have both the time and attention to devote to the whole record, do so, as everything makes a great deal more sense in context - a bona fide 'album' as opposed to a collection of songs.