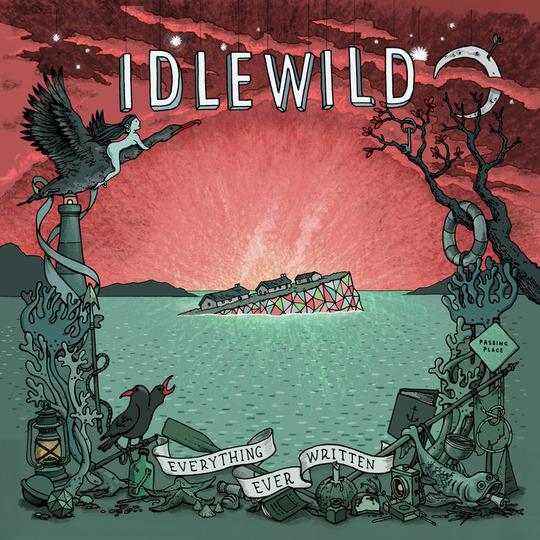 Idlewild were once a very special band indeed. Unique among their contemporaries at the time of their formation back in ’95, they were a British band that didn’t imitate American underground rock, but seemed to actually be a European outpost of the same. While other acts attempted to regurgitate grunge and college rock in typically ham-fisted fashion, Idlewild felt and sounded like the real deal. The ferocious squall of Captain and the brutal, sad swell of Hope Is Important made them rare, delectable, beautiful and bruised. Their live shows focused on a crazed Roddy Woomble, flailing, screaming, pounding at the sticky floors of shitty venues in every corner of the UK.

Later Woomble became less furious, more poised; a poet. The band’s Scottishness bled through their US style, dyeing the group a whole new shade of jangling folk rock. Pastoral, beatific and often in debt to the labyrinthine lyrical and melodic world-building of early REM they spun their strangeness into off-kilter arena anthems and struck a rich seam both artistically and commercially with 100 Broken Windows and their finest, boldest album The Remote Part.

In later years the group lost original bassist Bob Fairfoull and began to somewhat narrow their appeal. Albums like Make Another World and the underrated Post Electric Blues occasionally sounded like a band bereft of meaningful ideas, their ire spent, now tangled up in Woomble’s cryptic imagery and hamstrung by the limits of rock music. Many fans yearned for earlier, more focused work, the band themselves appeared to be drifting away from Idlewild as a central concern in their lives. With half a decade away from the studio Idlewild have returned with album number seven, Everything Ever Written, largely written on the Isle of Mull (Woomble’s permanent home) and honed during last year’s acoustic tour of the Highlands and Islands of Scotland.

Firstly it’s worth dispelling any nagging notions that this is a by-the-numbers cash-in comeback record. It doesn’t centre around a particularly catchy single nor does it attempt to revisit fan favourite moments of the past. In fact it is a genuine progression for what feels, from the first moments of surging guitar on ‘Collect Yourself’ to the closing shudder of melancholic piano on ‘Utopia’ like a band revitalised, newly confident and assured in their art.

As ever it’s guitarist Rod Jones’ interplay with Woomble’s yearning, lachrymose, clipped yelp that brings the magic to the material here. Woomble’s poetry is richer now; declarations mix with observations, the cryptic tangles with the explicit, repetition gives way to stylistic shifts. When new guy Andrew Mitchell’s bass lollops into Jones’ sweet, intricate descending guitar lines on ‘Come On Ghost’ and Woomble offers an image of “…an explosion in the sewer / the rats that pine for the sunshine” we catch our first glimpse of the greatness of which the band is capable. The last sequence of the song really shoulders up among their better moments – all high pitched wail, strings and ragged feedback as a surprise saxophone belts out a psychedelic suite. It’s unexpected, bright, bold stuff.

Nashville soul tune ‘So Many Things To Decide’, replete with a teary-eyed organ and the perfect refrain (“Do you ever get the feeling I made important decisions far too late in life?”) has the feel of a modern Springsteen song, particularly as Woomble offers “I can see the town in the distance and there’s moonlight on the water tonight”.

Perhaps the most typically Idlewildean song here is ‘Every Little Means Trust’ with a Peter Buck lick that leads us into a minor key call and response verse and the killer line “At least in my dreams I’m always young”. It plays their classic winning hand of imbuing songs of sparse, stoic sadness with an almost magical sweep of empowerment. There’s a triumph to their uniquely Scottish sadness, a stretching for something just out of the reach of the fingers – “Every little must mean something more than enough”. When they push themselves further away from their usual comfort zones they, happily, surprise and excel. ‘Left Like Roses’ could be best described as luxuriant, near-Yacht rock; ‘(Use It) IfYou Can Use It’ is a Hebridean/Californian hybrid of Eighties pop in the mould of Prefab Sprout or, perhaps more pointedly, Aztec Camera. This is extremely sophisticated songwriting abetted by production sheen that helps it skip, pebble-like across the surface of a number of genres; Jones is at hand to dirty up his own production with ravaged guitars on the latter, Woomble dropping compelling, confusing lines like “I’m in that photograph but it was taken before I was actually alive”; the band spread out into a Wilco-like breakdown/buildup ending and somehow pull off the Seventies-style jam with aplomb.

The possibility of channelling Wilco crops up once more on ‘All Things Different’, a lounge rumble that nods again to Tweedy’s crew with its shuffling, jazz-tinted shrug n’ roll, seemingly random trumpet blasts, Colin Newton’s sharp drum sound, and with couplets like “As the circle of knowledge it grows and grows / I labour today in hope for tomorrow” we’re served up a true silver screen slice of strange.

In fact, there are elements to a further song ‘Radium Girl’ – all splashy cymbals and chimes, a close cousin to ‘I Can’t Stand It’ that also recalls the lauded Chicago maestros. It’s no bad thing. A comparison to a band renowned for their sense of adventure, intellect, imagination and accomplishment, especially a favourable one, should definitely be seen as a positive.

There is a moment of indulgence here in the shape of latecomer ‘On Another Planet’ when Jones is finally unleashed and the band burst into fireball passion, power and pace, “You’ve got more in common than sorrow” wails Woomble as the song lurches headlong into shimmering, streamlined punk rock racket. It’s a brief but endearing collective look far back over the band’s shoulder at their much younger selves and, pleasingly, while they may be a million miles away from that style nowadays, they are still more than capable of dipping their toe back in the cool water of their own personal fountain of youth.

Everything Ever Written is, then, a genre-traversing, surprising, melodic, poetic, anthemic record with heart, smarts and soul. It may not recapture the Fugazi-fuelled fire of their youths; it may not scale the obviously commercial heights of their mid-period – but it certainly lays to rest any ideas of a band lost to complacency or confusion. The focus is there, the execution is there. It’s a record that delivers, satisfies, challenges and is occasionally sublime. So now, go back to the opening sentence of this review and replace ‘were once’ with a simple ‘are’.