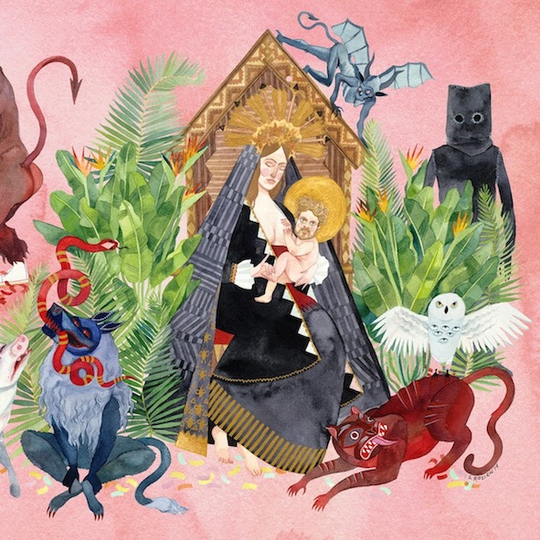 Josh Tillman’s Father John Misty persona burst into being with the release of Fear Fun in 2012. The witty, irreverent and picaresque tales on that album seemed a long way from the slightly bloodless beauty of Tillman’s former band, Fleet Foxes, or indeed previous solo material released under his own name. With the new identity came a swagger that we hadn’t really seen before, and a sense of the fun to be had in excess and debauchery, reflected back and amplified from the lyrics to the music that framed them.

And this time Tillman has pulled this all off again – if anything, even more so. Loosely framed as a concept album around his getting together with wife Emma, I Love You, Honeybear pinwheels between an honest, bruised tenderness and worldweary cynicism, but never in that yawnsomely earnest way you all too often find when singer-songwriters use their material to present and fillet their own relationships.

So we first meet the pair on the opening title track, a straightforward ode to their love, set to syrupy high-maintenance strings. They frolic on “Rorschach sheets”, literally fiddling while Rome metaphorically burns, or as Tillman puts it “Getting high on the mattress, while the global market crashes”. Already you’re swept up in that exclusive everything-is-shit-except-you-and-me feeling of fatalism and romance – a recurrent theme that can also be found in the chucklesome ‘Chateau Lobby #4…’, with its distrustful neighbours (who complain about Josh and Emma’s noisy lovemaking, fearing that “the misanthropes next door are probably conceiving a Damien”); or in Tillman’s sweet, dazed wonder at the pair’s fortune in actually meeting, delivered with stark honesty on the simple, acoustic closer ‘I Went to the Store One Day’. “For love to find us, of all people / I never thought it could be so simple”, he sings, tangibly relieved and still astonished at his good luck.

But it’s by no means all hearts an’ flowers in the world of FJM. In contrast to the 'love' songs, we get the tales of troubling encounters, the loveless shags with shallow people, stories from which no-one really emerges with much credit, least of all the singer/narrator. The Josh Tillman of ‘The Night Josh Tillman Came To Our Apt.’ is, frankly, a bit of a dick, mocking the admittedly annoying girl (sample quote: “like, literally, music is the air I breathe”) that he’s presumably trying to bed, in a mean-spirited albeit funny and snotty tale. The bile almost masked by the pretty chiming music in which it is set, we get an itemisation of some of the “main things I hate about her”, before a dark twist at the end when the narrator “obliges”, when the girl “begged me to choke her”. Also problematic is his choice of simile in ‘Nothing Good Ever Happens At The Goddamn Thirsty Crow’: [my baby] “…gets down more often than a blow-up doll”. Nice.

Ultimately, though, this is a set of songs encased in such lush, enriching music – from the gloriously soft and easy listening of ‘…Honeybear’ to the chilled country of ‘Nothing Good…’, Jonathan Wilson’s production values once again set to lush throughout - that it’s hard not to forgive its protagonist his transgressions. Something of the mad hyperbole of infatuated lust (“Emma eats bread and butter / Like a queen would have ostrich and cobra wine”, sings the besotted fool, even her handwriting is “your perfect script”) contrasted with the unsparing confessional of his more reprehensible adventures is reflected in the wonderful melodies and arrangements throughout.
The sequence of ‘Bored in the USA’ (melancholy, elegiac, complete with self-importance-puncturing canned laughter track and a glorious key-change towards the end) into ‘Holy Shit’ is quite simply terrific. The latter - a roll call of contemporary themes and buzz words, from the apocalyptic (“Ancient holy wars / Dead religions / Holocausts”) to the more trivial “Mobile lifestyle / Loveless sex”) – is perhaps the stand-out track on a brilliant album certainly not lacking in other highlights.