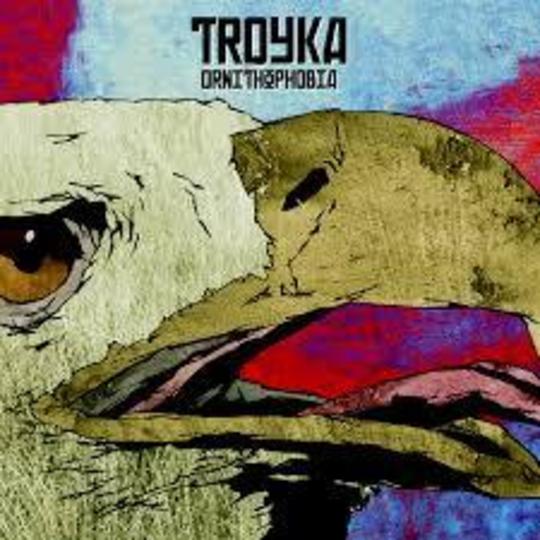 Richard D James probably made his way into the dreamworld of Mr Yorke a long time ago. But if Thom's in need for a new jazz-electro fix then he should turn to Troyka. They'll sort him right out.

Ornithophobia, their third record, positions itself firmly in the jazz camp. But, unlike a lot of modern jazz records the group have actually created something fresh and kind of accessible. I mean, it's still jazz. You won't find any singalongs or melodies lurking behind their twisted time signatures. What you will find though, is a whole load of glitchy eccentricity that flirts around the realms of pleasantness every now and then.

Nothing on the record makes a lot of sense, but that's the point really. 'Life was Transient' has the sound of an instrumental you'd find on the second LP of a Pitchfork-approved rapper. The type of rapper who wears tie-dyed shirts and raps about vegan sushi. The song takes the listener to a tropical paradise where it's all about the good times and the break beats. A wonderful place, I'm sure.

There's always a real danger that modern jazz artists will fall down into a gaping hell-hole. The same hell-hole every single Mercury nominated jazz act has fallen down over the past ten years or so. Luckily Trokya manoeuvre this hazard with ease. Well, almost... There is one slight slip. The album's title track is nothing more than a big ball of noodling snoredom. There's just too much soloing on 'Ornithophobia'. It's okay to play a melody once in a while fellas, or a groove, whatever lingo the kids use these days.

Saying this, sometimes the jazz guitar works. 'Magpies' and 'Thopter' manage to chop up the guitar noodles into digestible pieces, creating a sleazy, awkward mess that tickles the ears with it's intricacies while punching the gut with its heavy vibes. It's one heck of a potent combination and one more jazz acts should be trying out if they want to escape the bearded beatnik stereotype they've been lumped with for a good 70 years.

'Troyka Smash' should be the group's finishing move, just like a hadouken in Street Fighter, but unfortunately, it is not. However, the track does have a pretty cool drum beat, and while that isn't as cool as shooting a flame from your palms, it'll have to do for now. I guess you can't have everything.

Instead of firing a hadouken, Trokya bow out with a bit of grace. 'Seahouses' is a luscious lullaby from the depths of a Game Boy. The chords swirl around and around while a subtle chiptune loop echoes inside of a chamber of its own making. It's almost angelic. You could even call it dreamlike, if you'd like.

Someone should give Thom a call. Troyka have the tools make his dream a reality. Well, they would do, if they'd just stop with that dastardly noodling.