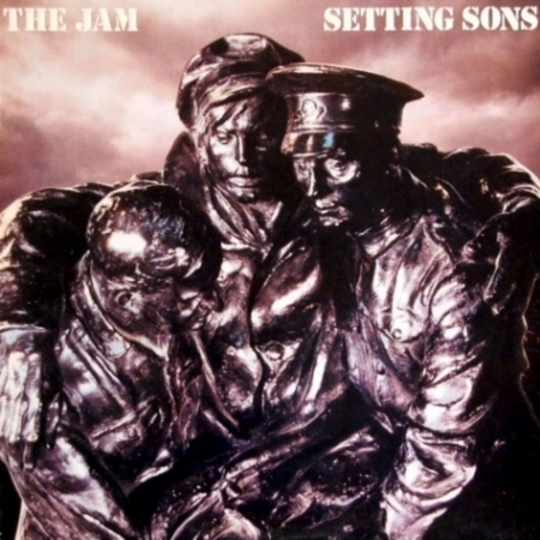 Back in November 1979, Paul Weller was still only 21 years of age. And yet, that month also saw the release of Setting Sons, the fourth record by The Jam. Arguably the biggest initial success story from the first wave of punk, their commentaries on the struggles of everyday life reflected the changing moods and culture of the time. Margaret Thatcher and the Conservatives had just assumed power, racial tension was brimming in the wake of the Southall riots and a major recession was just around the corner. Indeed, the parallels between then and now are similar: austerity cutting deep into the pockets of the working classes while Tory PM David Cameron prepares for a general election, with the rise of UKIP mirroring that of the National Front. These were desperate times so it's somewhat remarkable that some of the greatest music this nation has produced was created during such a hostile era.

Having already put out three albums over an 18-month-period between the summer of 1977 and winter of 1978, The Jam's status as one of the most prolific bands of this or any other time was already assured. Emerging from the town of Woking during the outset of punk, it was clear from their sharp suits and soulful reference points this trio were about much more than rhetorical art school nihilism. Setting Sons' predecessor All Mod Cons – released the previous November and since revered as their crowning glory – raised the bar somewhat from the band's first two records.

What came next would be an attempt at creating a concept album about three boyhood friends who eventually grow apart. Indeed, The Jam's subsequent break-up adds a degree of poignancy to Setting Sons' initial focus. Nevertheless, as an album, it delivered some of the band's finest moments across its ten pieces. 'Thick As Thieves' and 'Little Boy Soldiers' read like reminiscent artefacts from the pages of an adolescent's diary. "Like a perfect stranger, you came into my life" depicts the former while the latter concedes, "These days I find that it's all too much." Musically taut and proficient, each member complimenting the other rather than the rhythm section providing an auxiliary vehicle for Weller as the picture has been painted since. 'Smithers-Jones' represents bass player Bruce Foxton's finest composition. Originally placed on the b-side of 'When You're Young', a non-album single which preceded the record by a good three months, its satirical depiction of a careerist office worker climbing the hierarchical ladder has a touch of Alan Sillitoe's wit and wisdom. Then there's the impending gloom relayed on 'Wasteland', a paean to British industry's habitual bereavement ("We'll sit amongst the rubber tyres... People have no use for, amongst the smouldering embers of yesterday"). It's prophecy alarmingly accurate, if anything it highlighted The Jam as poet laureates of their generation.

The attack on public school education referenced in 'The Eton Rifles' proved something of a pivotal moment for the band. Providing them with their first top three singles chart placing, it undoubtedly laid the foundations for the string of number one hits that followed, while firmly establishing The Jam as punk rock's sacred cows. Elsewhere, 'Saturday's Kids' served as a rabble rousing anthem about living for the weekend while 'Burning Sky' once again tackled the subject of profit margins and the growing divide between rich and poor. In many ways, Setting Sons can be viewed as a protest record, even though there are one or two clumsy moments. In hindsight, the album may have fared better had their cover of Martha & The Vandellas' 'Heat Wave' and largely forgettable 'Private Hell' been omitted and replaced with the likes of 'When You're Young', 'Strange Town' or its superior flipside 'The Butterfly Collector'.

Fortunately, this four-disc deluxe collectors' edition covers all bases before, during and after Setting Sons by including all three non-album singles ('Going Underground', the band's first number one released in the early part of 1980 never made it onto album number five, Sound Affects) and b-sides as bonus tracks alongside the album. The second disc contains 18 demos recorded during the album sessions of which all bar one are previously unreleased. Interestingly, three of these were never re-recorded; 'Simon', 'Best Of Both Worlds' and 'Along The Grove' and while completists will no doubt be rubbing hands in glee at their inclusion, this collection wouldn't have felt any less cohesive without them. What is quite charming is the demo version of 'Strange Town' complete with 2 Tone-style organ and stop-start ska riff, while 'Little Boy Soldiers' becomes even more enchanting in stripped down form.

Disc three highlights The Jam at their best as a live force to be reckoned with. Capturing 20 songs from their Christmas show at Brighton Centre as 1979 draws to a close, Weller's pleas to the audience to move back a reminder of the raucous reputation of their gigs. The fourth disc collects all five promotional videos from that era alongside numerous Top Of The Pops appearances and a clip from BBC2's Something Else television show featuring live performances of 'The Eton Rifles' and 'When You're Young'. Ornately housed in a 68-page, hardback book featuring memorabilia, rare photographs and song lyrics as well as a replica Setting Sons tour brochure and fan club magazine, it's an essential addition to any Jam obsessive's collection and as good a starting place as any for those on a voyage of discovery.