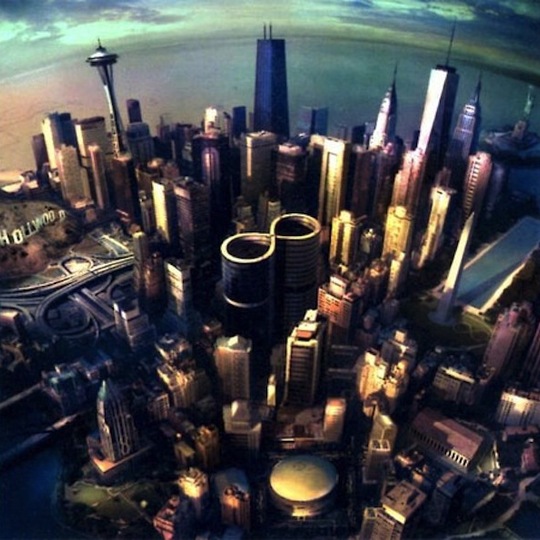 You know what you're getting with Foo Fighters these days, and album number eight does nothing to subvert your assumptions or challenge their chart-topping formula. Which is a pity.

They're an odd entity, the Foos. With one hand they giveth, like the ethereal 'Everlong', one of the greatest rock tracks of modern times, but with the other they throw shit at the wall and some of it inexplicably sticks, like their long-running catalogue of boring, inoffensive radio rock singles over the last decade. Sonic Highways isn't outwardly attributed to one of these metaphorical extremities, for the most part, but certainly has the coolest title of any of their records to date.

It's born from a television series of the same name in which the band crossed America, taking in the local soundscapes, recruiting the native talent and cooking up a melting pot of influences. Not that you'd really know it, though; this is just Foo Fighters, lacking any real commitment to country, jazz, punk or other elements of the States's sonic heritage that they encountered on their televised travels.

The cultural aspect is woven more into the lyrics, such as opener 'Something from Nothing', with its apparent tales of the fires and floods of Chicago and an appearance from Rick Nielsen of the always-awesome Cheap Trick. Caffeine aficionado Dave Grohl doesn't appear to get his shot until the screaming crescendo of its closing moments, fumbling along, stopping only to pinch a riff from 'Holy Diver' despite not visiting Ronnie James Dio's home state of New Hampshire.

Elsewhere, there's a chronicling of Washington DC's seminal hardcore punk scene with a little help from friends Scream, Grohl's pre-Nirvana outfit with whom he enjoyed cult success in the 1980s. Meanwhile, 'Outside', graced with Joe Walsh's presence, is the soundtrack to a hot California highway, the perfect desert storm of sunkissed nostalgia and The Doors's sweaty psychedelia. It's probably the album's most three-dimensional moment. The dust settles all too soon though, as evidenced by 'Subterranean' and its yawn-inducing impotency, a firm example of their part-time dedication to being thoroughly average.

That's the thing about the Foos. While occasionally striking like a brilliant, blinding lightning bolt, they all too often seem to ride a wave of bleating mediocrity to multi-platinum heights. Success and being worthwhile don't correlate, as Minaj hath taught us. One probably shouldn't deny the band's talent or traduce their art to accusations of stifling commercialism, but they don't seem to even chip at the mould for a band in their twentieth year and of such diverse backgrounds, who partake in practically non-stop sidelines.

Again, you know what to expect here. Even the most caring, keen Foo Fighters fans know what to expect here. There's really not much more that needs to be said about their sound and likely never will be, but there's a word count to hit here. See that self-serving, perfunctory statement I just made? That's the ethos of this album. “I am a river” declares Grohl in the anthemic, twinkling ballad of a closer. In doing so, he provides a functioning allegory; the band are seemingly eternal, free-flowing and somewhat pure but delve too far for too long, and you'll be left feeling cold from an effort that's ultimately a bit wet.