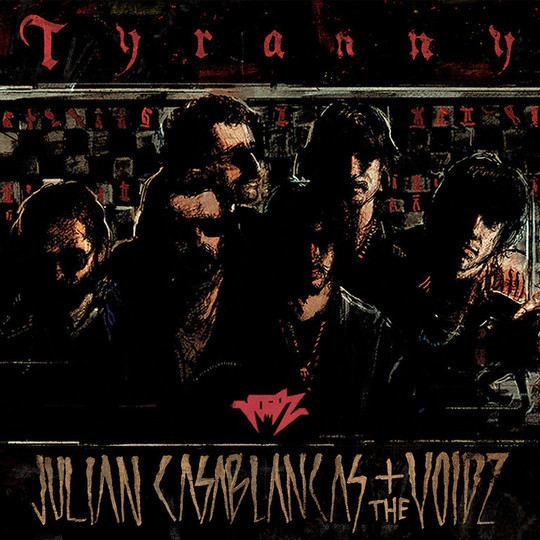 You know when you’ve accidentally got two different songs playing on your computer and it takes you a few seconds to realise? Maybe it’s just me, but whenever this happens, and I turn one off, I’m always curiously disappointed by what’s left. The first song from Tyranny called ‘Take Me In Your Army’ reminds me of precisely this…’cept there’s no second song playing. As an album opener, it’s resolutely strange…doomy off-key bass, glimmers of pleasing Blood Orange-esque vocals, eerily-trebly guitar…curiously compelling if you listen for about ten seconds; a bit agonising if you force your way to the end. For the moment, I’m gonna be lazy (for a change, like) and suggest that this encapsulates Tyranny, Julian Casablancas+The Voidz' inaugural labour of love.

Towering ambition, painstaking hard work and giving a shit are usually things to be admired when it comes to creative endeavour. Especially so when the central creator has been partly responsible for at least two, arguably three, lacklustre works over the last 10 years. So it’s a bit tragic (at least to begin with) that in the case of Tyranny it’s these ‘qualities’ that make it such an ostensibly difficult album.

'I’m not trying to confound people or trying to be weird. I’m trying to do something inspiring and cool,' Casablancas said in a recent interview. Yet the very necessity of such a statement implies a chimera. There’s something to be said for trying to avoid churning out a standard garage rock song – for attempting something different, risking intense criticism. Trouble is, when the effort ‘to be different’ is so obvious from the off, it can smell a bit like bullshit. Hence second track ‘Crunch Punch’, which largely sounds like an interesting rock song but one that’s cripplingly afraid of sounding too ‘normal’ and so arbitrarily veers off-course every few seconds.

Such faecal waft pervades Tyranny…and yet. And yet this record is so preposterously unlistenable, so deliberately overblown (first single ‘Human Sadness’ is 11 bloody minutes long) as to be almost impressively appalling. I defy anyone to give it more than one full listen in a single sitting. But each time I’ve forced it back into my ears – in accursed submission to the DiS deities – I’ve pendulum-swung from inchoate rage to begrudging appreciation. These guys are trying so hard to annoy the hell out of me, that a frisson of respect is inevitable. And then I start to wonder: is Tyranny secretly astonishing?

An easy observation is that there’s a likeable aesthetic of retro-filtered dystopia running throughout, as seen in the video for second single ‘Where No Eagles Fly’; the video’s Eighties impression of the future is a bit heavy-handed, but peculiarly evocative on record. Think monstrous machinescapes, Blade Runner cut scenes, Spaghetti Western-in-space-chase romps. The album is also punctuated by excerpts from old films and broadcasts like radio signals that have drifted through the cosmos over time, then been captured and melted down into The Voidz’s quasi-futuristic songs.

As for the aforementioned ‘Where No Eagles Fly’ – it’s an exhilarating space-rock blast (and under four minutes, mercifully; several tracks here tick over six). With its laserbeam synths, android-punk vocals and rocket-engine percussion, I imagine secret-police hover-drones chasing freedom-fighting rebels amidst the soaring skyscrapers of Future City.

There are many other enjoyable moments, like the bizarre industrial-Afro vibes of seven-minute-long ‘Father Electricity’, which the reanimated Kramer from Seinfeld will surely be jigging to in the 24th century. Or the slumdog thriller ‘Dare I Care’ with its menacing bassline and undulating rhythmic hypnotics. Or ‘Johan Von Bronx’s deranged anti-solos. Or JC’s determinedly warped vocals throughout, alternately screeching, grumbling or purring something about the end of civilisation or how The Matrix has our souls.

There are desperate duds, most notably ‘Xerox’, whose monotonous spook-melodies are just boringly weird. And with its all-out, unrelenting aural onslaught, Tyranny is one of the most exasperating ‘pop’ records you’ll listen to this decade. But so much work has gone into every moment of this album…synths bleeping one moment, throbbing apocalyptically the next, jostling with layer upon later of clashing guitar lines and distorted, impenetrable fuzz…there’s simply an endless repository of ghosts-in-the-machine, melodic snippets, fragmented curiosities to dig up…that it might just be one of those rare treasures which keep us reluctantly, unstoppably, coming back again and again.

'We may have travelled too far in the future for some minds, but to me it’s totally to help train mainstream ears,' JC said in that interview. But the thing that’s most annoying about that insufferable fucking statement is that I can’t tell for sure whether he’s wrong. Tyranny has to be, in part, an exercise in provocation. Thus the first single off the album, ‘Human Sadness’, which opens with oldie-sounding strings giving way to a kind of elegy peppered with robotic guitar lines, strange echoes and whispers… before drums a bit like M83’s Oblivion rise against Space Invader synths, heralding the climax…only for you to realise that there are still eight more minutes of this. Every time I come back to ‘Human Sadness’ – and the album as a whole – I can’t decide whether I’m stooping over a boundless cesspit, or listening to a masterpiece slowly unfolding. But I keep coming back. So either I’m really attracted to shit, or…or


*ask me again in a year