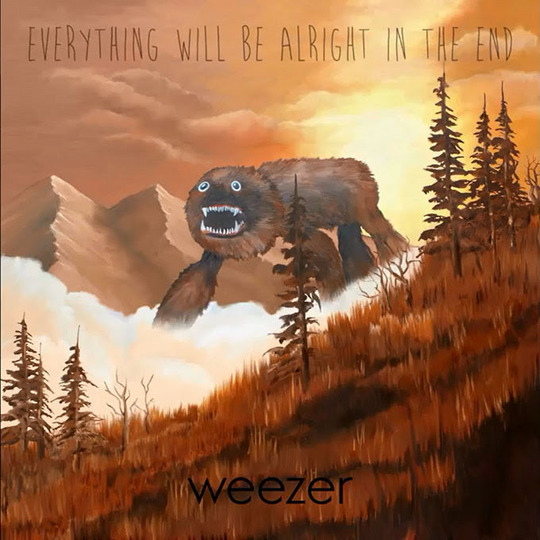 Early interviews mentioning The Blue Album and Pinkerton. Check. A lead single that promised we’d be rocking out like it was '94. Check. It was clear what Weezer were trying to tell us: Honestly, we mean it, for real this time, this one’s going to be the one you’re waiting for. But put aside all of that and Everything Will Be Alright In the End is pretty much what you expect it to be: a record which, while sharing similarities with records from their earlier periods, is another predictably uneven entry in the Weezer discography.

It’s not actually anywhere near as much of a return to the sound of the Nineties that they’ve made it out to be. Within bars of the opener ‘Ain’t Got Nobody’, it’s clear that there’s just as much overlap with the crunch and flex of Maladroit as with the chugging fuzz of Blue. It’s a dense sound with glamorous guitar runs and, by blending the strengths of their career high points, they hit on some of the greatest moments of their recent output. The hooks of the opening track are genuinely reminiscent of Rivers’ golden age of song writing: ‘The British Are Coming’ sees a lilting turn of Rivers Cuomo’s falsetto morph into a solo which wanders from the main melody in the soulful, colourful way of Blue’s instrumental breaks. But sadly these moments of inspiration are fleeting.

One of the oddest problems with Weezer’s recent output is how blindly contradictory Cuomo can be on record nowadays in comparison to the robust character portraits he painted on his earliest records. Everything… is no different, and finds him sounding as oddly insincere as he has since on every record since 2005. After coming back on hands and knees to the audiences of the mid-nineties, he spends ‘I’ve Had It Up To Here’ rallying against those who want him to compromise some odd notion of integrity (“I’M NOT A HAPPY MEAL”, he proudly announces us in the album’s best wincer of a Cuomoism). How he squares this circle is unclear, but it totally undermines the seriousness of something like ‘Foolish Father’. Does he even mean this? Is he talking about himself? Is it all made up?

But beyond the continuation of Cuomo’s increasing incoherence, what’s perhaps most damaging is the general sense of low ambition across the record, despite gimmickry like the album’s title recurring through the lyrics, and suites of songs in trilogies. The chorus of ‘Eulogy For A Rock Band’ is lifted – almost completely intact – from Hurley’s lead single ‘Memories’. The 2D hooks of ‘Lonely Girl’ and ‘Go Away’ circle for a while, wandering out of your head immediately. Sure, it escapes outright disgrace. But that’s a pretty low benchmark for the band that wrote ‘Say It Ain’t So’, on an album based on a publicity cycle promising a return to that era to boot. In spite of its moments of charm, it’s a far cry from being either a fun retreat into 20 years ago, nor is it any indication that Weezer's reputation will be in better health 20 years from now.