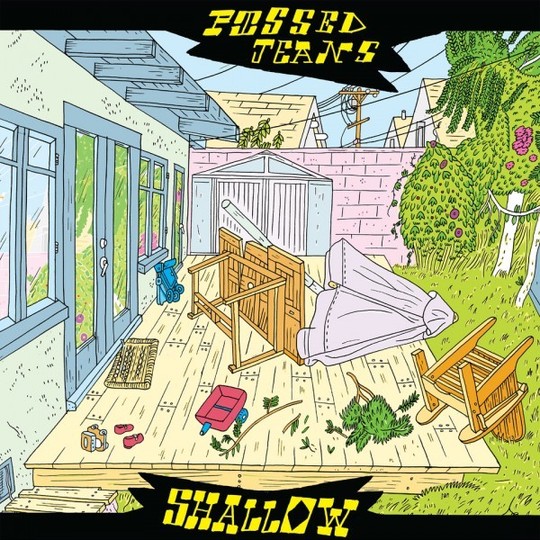 Regarding the last time I saw Pissed Jeans play live, a hastily-arranged London date in the middle of August, two things come to mind which could be seen as relating to this album. Firstly, I was convinced at the time they played ‘Little Sorrell’ – a song about a taxidermied horse, seventh of eight songs on Shallow, their 2005 debut – but overheated rooms and grotesquely-tuned guitars played through muddy PA systems make fools of us all; I’m not sure the song’s actually in the group’s live repertoire.

Secondly, Pissed Jeans were over here to play All Tomorrow’s Parties’ doomed Jabberwocky weekender, the laughable collapse of which caused this gig to happen. Frontman Matt Korvette briefly referenced this onstage, but only in archly sarcastic fashion. After all, it wouldn’t really have done to aim pelters at a company with whom they’ve enjoyed a mutually beneficial working relationship for some years. You could extend this further and wonder whether – but for entities like ATP, which has repeatedly given noisy, marginal bands higher visibility and a wider audience – Pissed Jeans would still be gnarling away to the same crowd of Pennsylvanian punks and noiserock obsessives who lapped Shallow up first time out.

Originally released on the Parts Unknown label, whose debut release was a single by The Gatecrashers – a fast hardcore quartet featuring the same four gents who play on this album – Shallow has been out of print since PU shut up shop in 2011. Sub Pop’s reissue, along with their 2004 debut single ‘Throbbing Organ’, is thus a public service of sorts. Not just so people can buy the LP without having to spend £40 or more, but also to (hopefully) correct the notion that Shallow is an ignorable, semi-formed gobbet of noisy incoherence, made before those smart cookies at the big indie label knocked them into shape.

Certainly, it’s low on subtlety, compared to the three Pissed Jeans albums which have followed it. Korvette’s vocals are delivered just about exclusively in a strangulated gurgle, equal shades of David Yow and Eyehategod’s Mike Williams, and are buried in the mix often as not. ‘I Broke My Own Heart’ is the sole exception here, blank intonations seemingly carrying the message that the human capacity for self-sabotage tends to outweigh the malevolent intentions of others (“I was late for my own dinner / I stood myself up / I forgot I had plans with myself” – ‘Dominate Yourself’, from 2009’s King Of Jeans, is effectively a thematic rewrite of this). ‘Ugly Twin (I’ve Got)’ is comparably navel-gazing, Korvette assuming the character of a pouting child – the ugly twin is, of course, him all along – over a riff that sounds like The Jesus Lizard sinking into a tarpit. The instrumental piano part at the very end is more bathetic than soothing.

Mostly, Shallow is aurally thunderous – demonstrably a product of the modern hardcore scene, but sounding like it’s dead set on brutality via guitar tone. A case could be made for its ancestry being found in Blue Cheer, Void, My Bloody Valentine, Brainbombs or Landed, despite Pissed Jeans sounding little like any of those bands. ‘Wachovia’, the final song on the album, is a largely vocal-free showcase for guitarist Bradley Fry (who was, at the time, also wrestling in a small regional division called Chikara) to unleash meteor storms of strobing psychedelic axe-murder. Or a successful crack at being Skullflower, depending on how you look at it.

Perhaps understandably, the more propulsive or structured parts of Shallow are the ones which have endured as Pissed Jeans have been exposed to a wider audience. ‘Boring Girls’ is the proverbial early number you’re most likely to hear them play live: its rhythmic drive is of a piece with the other guaranteed pit-openers in the band’s back pocket, ‘False Jesii Part 2’ and ‘Bathroom Laughter’. All three of these songs portray Korvette as a sort of social caterpillar erratically trying to get a handle on the collective mundanity of the general public; ‘Boring Girls’ is the odd one out, in that he’s fetishising their boringness rather than reacting against it. He also sounds oddly like he’s putting on an Australian accent here, usefully for a song which would have done Eighties-era Antipodean noisers like Feedtime or Venom P Stinger proud. ‘Ashamed Of My Cum’ (“...never satisfied, even after I’m done”) is more gauche and grubby than anything you’d catch Pissed Jeans penning nowadays – they were in their early twenties at the time – but remains pretty undeniable thanks to its Flipper-style bass intro and a chorus which I may later regret describing as 'explosive'.

All of this has been given the now-obligatory remastering treatment, and while Shallow was by no means lacking in assaultive qualities beforehand, the myriad feedback and jagged cymbal crashes have been brought into focus and made that little bit more eye-gouging. ‘Throbbing Organ’ is murky and snarling, and could perhaps be considered a bridge from the Gatecrashers, in that it sounds like a slowed-down version of any number of oddball hardcore bands. ‘Night Minutes’, the single’s B-side, feels more developed, closer in execution to Shallow (and follow-up/Sub Pop debut, 2007’s Hope for Men), although it’s really a two-minute song left to run for nearly four.

If those two songs were Pissed Jeans’ agreeably uncompromising debut on vinyl, Shallow is in a different league: one of the best noiserock releases of the so-called noughties, in fact. (I don’t really have a developed canon here, personal or otherwise, but in this regard I’d place it alongside Clockcleaner’s Babylon Rules, Billy Bao’s Dialectics Of Shit, Racebannon’s Satan’s Kickin’ Your Dick In and the Drunk In Hell demo.) The band’s 2014 audience, and the act of marketing to them, can’t very well be ignored – I don’t think it’s inaccurate, even if it’s a tad snooty, to say that PJ serve as an extremity in a certain type of indie rocker’s listening habits. If they pick up this album, they’ll encounter the band’s most difficult listen overall, but only relatively. Matt Korvette’s lyrics are more prosaic, but there are bits you can learn to sing along to; the three musicians, two of whom have since left the band, are always dedicated to the artistry of rocking, even when things get more or less freeform. And that’s something which Pissed Jeans still hold true, live and on record alike.