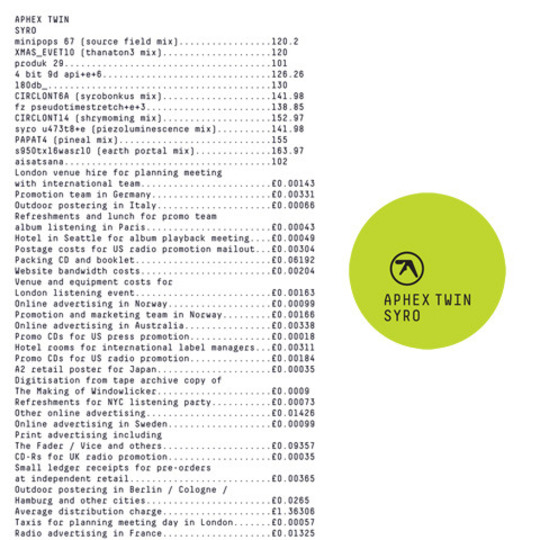 The general consensus seems to be that Richard D. James might have returned to save us all from the obscene banality of modern EDM. The acid-fuelled Cornish godhead, finally back to restore balance to a broken universe; redeploying the skills that inspired a generation in the Nineties. Blimps in the sky, graffiti on the streets, idiosyncratic press releases and secure listening events across the globe. Syro rewiring the mindset of future generations... All hail the Music Makers... All hail the Aphex Twin!!

Of course, if you've paid attention over the last 13 years then you'll know James never really left us. The reclusive 43-year-old father of two, doing little to fuel (or detract) from his mythic status, simply slowed his release rate to a crawl after the lukewarm reception of 2001's wildly undervalued Drukqs. His time and energy over the last few years was spent on the expansive Analord project and a pair of excellent releases under the thinly veiled guise of The Tuss. The spotlight refocused on him most recently after the excitement surrounding the Kickstarted release of Caustic Window - a long lost opus from around his Selected Ambient Work days.

So let's separate hype and anticipation from reality.

In the past it's felt like James has made music solely to satisfy himself. That's not to say his work has come at the expense of listeners, it's just that James has made a habit of staying a number of steps ahead of his fans – his career defined by our awe at whatever new sounds have formed in his brain and how they've eventually manifested onto record. But you don't get that on Syro. So if you're expecting boundaries to be pushed and minds to melt, then you're probably going to be disappointed. But, what it lacks in bona fide innovation it redoubles in dazzling brilliance.

Openers 'minipops 67 [source field mix]' and 'XMAS_EVET10 [thanaton3 mix]' have surfaced online in the past few years. And here James works them into a taught duo of acidic funk; compressed burbles, whetted synths and a smattering of chopped up vocals crystallise at their core. A reminder that vast paradigm shifts aren't always necessary when you handle melody and complexity with such a deft touch. A pattern he follows-up on '4 bit 9d api+e+6'. Its synth shudder and clatter clap of beats - as with some of his biggest hits - drive it towards an eerie yet eminently danceable place.

That's not to say the tracks feel safe or expected. The album's rhythmical upswing is marked by '180db_' which feels like a full-on warehouse rave, albeit with sinister overtones. Its tower of jagged rhythm, surrounded by the menace of pulsating beats; undulating percussive waves shifting like ominous shadows in the track's peripheries. While the couplet of 'CIRCLONT6A [syrobonkus mix]' and 'CIRCLONT14 [shrymoming mix]' sit at the LP's heart and lay a foundation for some of the boldest and most memorable moments. The former a juggernaught of deep fried acid that veers from a shudder of gut churned rumbles toward strobed, skewered chip-tune. While the latter - which opens with deceptive ambient clarity - swiftly morphs into skittish techno, rapid fire beats and dense refrains.

We all have our favourite flavour of Aphex Twin. But while there's no way to please everyone in a single album, Syro covers enough ground to leave even the sternest listener satisfied. Whether that's in the harmonic resonance of 'PAPAT4 [pineal mix]' with it's layers of grinding breaks and acid wobbles, or the maximalist cosmic Jungle of 's950tx16wasr10 [earth portal mix]'. And the finale 'aisatsana' nods - as on 'Avril 14th' from Drukqs - to Erik Satie, that increasingly regular touchstone for James. The minimal piano lines and hushed birdsong a fitting send off after a clamorous hour; leaving us to stumble dazed, elated and blinking into the daylight.

Syro sees a master craftsman return with renewed inspiration. And while it might not technically be James' most innovative album, it may well be his best: his most complete and engaging under the guise of Aphex Twin. It's not going to convert swathes of Avicii fans, but it's a powerful reminder why James is still revered in electronica. No one makes music quite like this and if they do - it's in James' imposing shadow. In many ways it's exactly what we've been waiting for all these years - and once you let the hype drain away - what's revealed is pretty much flawless.