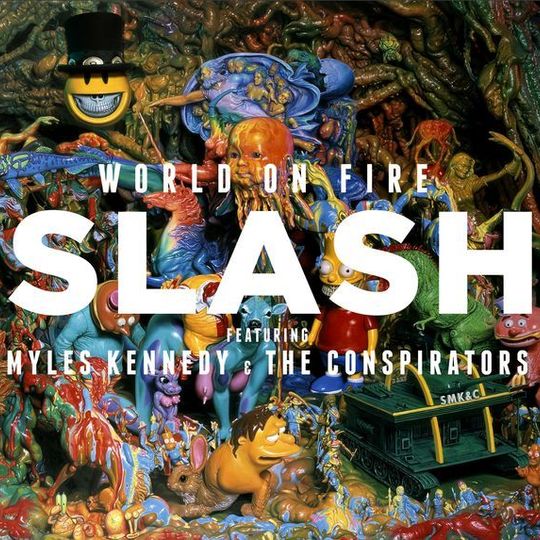 Much like the snakes that he uses symbolically and keeps as pets, Slash's professional life has been a long and winding one that has seen him repeatedly shed his skin and begin anew (while probably making some killer boots out of the remains). The Guns N' Roses explosion and implosion is still a hot topic in pop culture, while Velvet Revolver looked set to take the crown for a few years before it became clear that they were a – very, very bright – flash in the pan. Not even counting the Snakepit albums, sharing a stage and studio with Michael Jackson et al, acting stints, video game sponsorships and film production, the current stage of his serpentine career spawned from 2010's debut solo album. A borderline gimmicky effort, it was a multicoloured jamboree that saw a star-studded cast join him to make some noise, even if some of them were the most awkward, awful choices in Hollywood. It provided a few memorable tunes but didn't feel like fertile soil from which a new story could grow, especially given the evanescent stabs at solo glory in the Nineties and persistent promises of a Velvet Revolver continuation.

It would appear that it was, though, as it birthed the backing band of Myles Kennedy and the Conspirators, who are now on their second release as Slash's house act. Kennedy, initially coming across as an Axl Rose impressionist – a stigma not eased by his replacing of the bandana-clad vocalist at the GN'R Hall of Fame induction – is now an integral component of World on Fire, the most focused of the guitarist's eponymous efforts.

The frontman of the functional Alter Bridge, Kennedy was a bright star in his own right before appearing on the guest album but has since seen both bands evolve in parallel. Armed with a serious wail, a lovely head of hair and a disposition so cool that he falls just short of freezing the air around him, he seemed the ideal candidate for recapturing some of the excessive style of yore. But it's been a double-edged sword. The insistence on tacitly drawing comparisons between Kennedy and Rose does this album no favours. But there's a bit more to be mined here than a reminder of what once was and what might never be.

World on Fire's title track is as incendiary as its name suggests; a spring-loaded, precise burst of anthemic rock, the top-hatted icon still flaunting the scratchy style of riffage and unmistakable brand of hyper-blues solos of the Appetite days. Following suit, 'Shadow Life' taps into the dirty, danceable grooves of the same era, while 'Wicked Stone' rides the same rhythmic rails as Guns' runaway train. More modernised content comes in the form of 'Avalon', the soundtrack to a drive into the sunset, and 'The Dissident', custom-built for live arena engagement.

But these are just a handful out of the whopping 17-track total, a figure that drips with superfluity, and the thrills are altogether too short-lived. Where there was once attitude, there's now apology through inoffensive, perfunctory rock and the needless Black Stone Cherryisms woven through much of the album. Slash, for all his chameleonic ability to flirt in other areas of the sound spectrum, has always been most at home with nihilistic, sleazy, hard music. Thus, an overly ambitious collection of post-, pseudo-grunge like this steals the fire and flair that graced the efforts of top hat past.

Slash is a rock legend. A cartoon-like icon whose influence and iridescence have spanned almost four decades and who has contributed to some of the most era-defining, life-affirming heavy music in history. Any new effort on his part is always going to be met with the challenge of scaling such successful heights and capturing such musical depths, and World On Fire, while certainly not without charms, is a record that's happy to coast instead of climb.