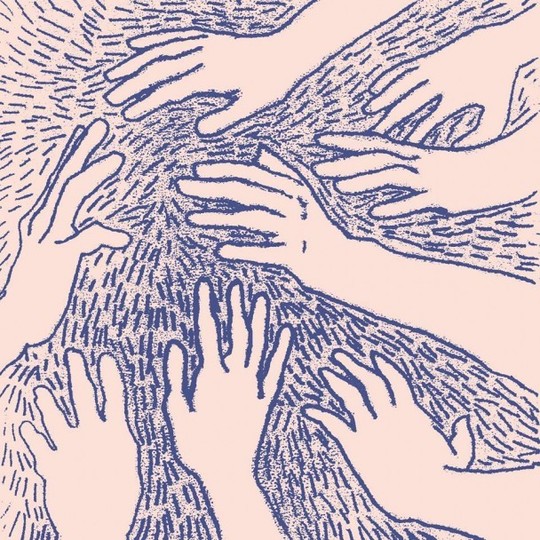 Dirty Projectors’ Bitte Orca is probably where it all began. That’s when it became common for pop music to unashamedly foreground technical ability. Since then, we’ve gotten more and more records which dazzle and bludgeon with impossible intricacies, setting into motion a trend which has intensified to a point where Owen Pallett can write essays turning the most seemingly banal pop songs into the subjects of serious study.

In Leeds – with the University of Leeds’ especially high achieving school of music – the local scene embraced this shift in zeitgeist with open arms, and Adult Jazz are possibly the strongest example of going for it with both hands. And this is no playful mayhem in the style of St. Vincent or Tune Yards. Gist Is is a long, knotty album, with nine songs taking nearly an hour to puzzle themselves out. It’s serious and even churchly in places, and there’s little attempt to make sure the listener follows Adult Jazz down their musical rabbit holes of jazz, hip hop and folk-tronica.

Opening track ‘Hum’ is a seven-minute landscape of drone and filtered vocals, taking a full four minutes or so before any form of percussion usurps the song’s titular noise. It is minutes more until the release of rasping brass and something approaching a choral refrain (a simple "uh-oh-oh") helps to drive the thing to its conclusion. The nine-minute centrepiece ‘Spook’ leaves even less connective thread between its ideas, making you feel that you should be leaving a trail of breadcrumbs to find your way back out from its build of loose grooves and tidy guitar runs.

But the intricacies of the pieces, along with the expert blending of their influences, make Gist Is a compelling hour of music. The unassuming showiness of the musicianship makes the impact all the stronger when its details catch your ear unawares – astonishing guitar licks battling against contorted time signatures, floating to the surface for just a bar or two before falling back into the arrangements.

For those who find putting proficiency on a pedestal to be stuffy and joyless, Gist Is won’t cause any conversions. It’s an unapologetically impressive and precise record that could do more to reach out and connect, rather than just dancing off, expecting the listener to follow. Hints of untapped vocal expression in ‘Donne Tongue’ and the recurring motifs of ‘Springful’ offer some fleeting footholds of familiarity, but more often than not, Adult Jazz leave you to unpack their efforts for yourself. It’s not an immediate album, but it is an absorbing one, rewarding close and repeated listens.