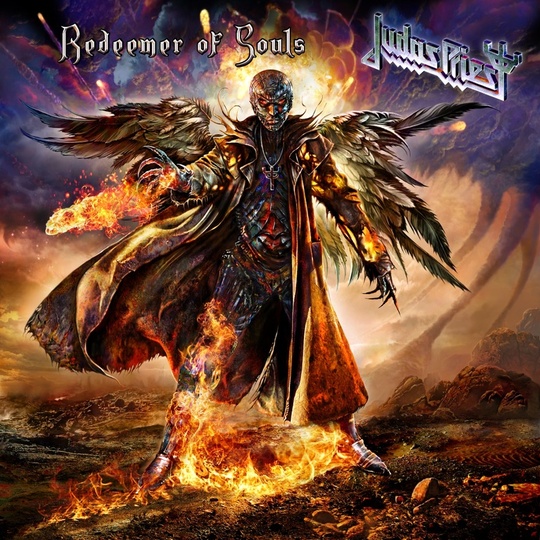 The reformed Black Sabbath have soldiered on through cancer, line-up changes, flirtations with narcotic old ways and Ozzy Osbourne being Ozzy Osbourne. Iron Maiden's simian motormouth of a frontman Bruce Dickinson is determined to stir up controversy, even having a go at the subject of this review most recently. But the third reason why England is the greatest country ever for heavy metal – Judas Priest – have, in recent years at least, carried themselves with more of a quiet, reserved dignity. That's not to say their career hasn't been a tumultuous one of death, drugs, depression and deviation, but where their genre-defining peers have continued to enjoy widespread, mainstream appeal, Priest have fallen into the realms of cult favourites with metal purists. The last of the big three to make a release this decade, their first effort in six years is now upon us after a period of change within the band.

There are a few ways to categorise Redeemer Of Souls. It's their seventeenth record overall, their third since scream machine Rob Halford rejoined the band and, most significantly, the first to feature new kid on the rock Richie Faulkner in place of founding guitarist KK Downing, who left in 2011, citing the old chestnut of creative differences. Perhaps it's this infusion of young blood (Faulkner is over 30 years the junior of most of the band), but there's a noticeable focus on their old-school fire-in-the-belly histrionics than last time around on 2008's ambitious but short-of-the-mark Nostradamus.

'Dragonaut' sets out the stall early. Poetic in its relative simplicity, it's chock-full of those guitar riffs that somehow sneer at you, entwined with the edgy melodies and sci-fi bombast that made 'Electric Eye' and 'Painkiller' firm favourites many years ago. 'Halls Of Valhalla' tempts one to use the description of 'cliché'. But Priest don't do cliché – Priest are the unapologetic source material from which heavy metal parody is derived. If you think you'll find a more metal opening this year than Halford's wail of "Val-hall-aaaaaargh!", you've got another thing comin', if you'll pardon the expression.

That being said, it's all not relentlessly in-your-face, and repeated listens reveal a more textured album. 'Sword of Damocles' is custom-forged for live arena lighter-waving with its rallying chorus and slick licks. It's also got one of those soft vocal interludes, like the one you sniggered at on Dio's 'Don't Talk To Strangers' before you realised his genius. And as they groove through 'Crossfire', they couldn't be more Zeppelinesque if they were banging a 14-year-old.

Priest, for all their leather-clad, engine-revving antics, have never been shy about ditching the distortion, with mixed results. On the hypnotic 'Beginning Of The End', they've just about nailed how to tone things down in an evocative, mature way, comfortably far from previous gauche attempts at balladry. Then there's the warm, if ever-so-slightly saccharine, bonus track, 'Never Forget', a self-referential cheers to the fans for a career spanning over forty(!) years.

That said, this is far from a consistent or definitive Judas Priest album. For every track that hits with the force of an anvil, there's one that falls with a clunk. 'Cold-Blooded' is of such forgettable, lumpen quality that it’s tempting to instead play it backwards to see what satanic messages might lurk within. Then there's 'Metalizer'. Despite its delicious title, there are members of Priest's bastard offspring doing the meat ‘n’ potatoes, almost tongue-in-cheek shtick with more finesse today than their studded forefathers.

Still, Redeemer Of Souls ticks just about every box in terms of an enjoyable heavy metal record. For the most part, it’s suitably overblown, cocksure and blunt, and still goes some way to capturing the genre's eternal, endearing refusal to grow up. For now, that's reason enough to celebrate their return.